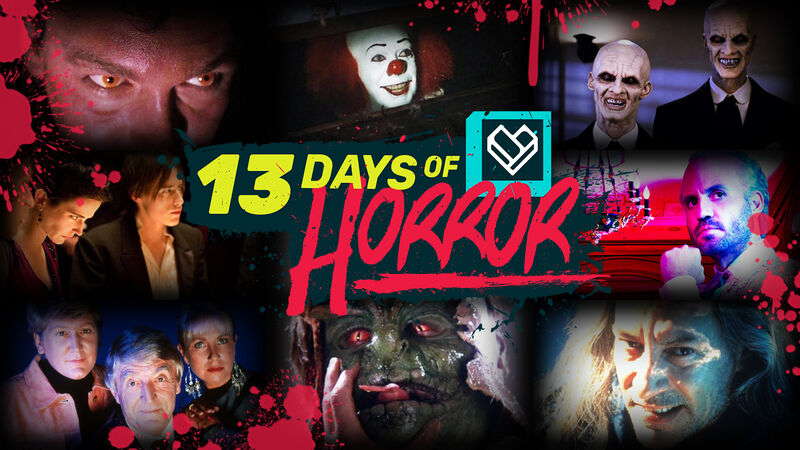 10 Terrifying TV Moments That Had Us Hiding Behind the Couch

The small screen can scare you just as effectively as the big screen — television has played home to some truly terrifying moments ever since some wag in 1895 pranked a room full of rubes by showing them footage of an oncoming train. With Halloween fast approaching, we decided to brace ourselves and round up the 10 scariest moments in TV history, featuring jump scares so frightening they’ll put a dent in your ceiling and baddies so horrifying they make the Daleks look like Dilbert.

The X-Files — The Eyes of Victor Tooms

If there’s a scarier bile-covered, liver-eating son-of-a-gun out there then we haven’t met him yet. Probably the most effective ‘Monster of the Week’ in the long, weird history of The X-Files, Victor Tooms made his debut in the Season 1 episode ‘Squeeze’, showcasing a grotesque, Stretch Armstrong-like elastic body that, unlike Mr Fantastic, he used for the power of perverted evil. An entire generation of impressionable young minds were irreparably messed up at the sight of Tooms’ eyes burning bright yellow — an image those older minds still subconsciously look for every time they peek through the gaps of a moving escalator.

A nation was lulled into a false sense of security on Halloween night 1992, as hosts Michael Parkinson, Sarah Greene and Mike Smith — the TV equivalent of a cheese platter — fronted the BBC’s first, and maybe only, ‘live’ foray into televised horror. If it was sold as a pre-recorded work of fiction it probably wouldn’t have caused much of a stir, but as it was billed as a light-entertainment perusal into the peculiar world of the paranormal, a nation collectively browned its pants when Parky and friends met a poltergeist called ‘Pipes.’ The show quickly devolved from a knockabout lark into seriously demonic territory, showing terrifying glimpses of ‘Pipes’ in the shadows — and at a time where viewers didn’t have Sky+ remotes to rewind. All hell literally broke loose and Michael Parkinson was left wandering around an empty studio, possessed by an ancient ghoul. 30,000 spooked complainers didn’t consider the entertainment ‘light.’

Audiences were desperate for the answer to the question: who killed Laura Palmer? When they finally found out who it was, they might have wished they never asked. Killer BOB did the deed, a malevolent spirit who feasts on human sorrow, although set dresser Frank Silva was cast in a happy accident when he mistakenly appeared in a mirror shot — David Lynch liked his look so much, he cast him on the spot. BOB’s most terrifying moment is in the vision by Laura’s doppelgänger Maddy, where BOB silently appears in the frame, then proceeds to climb over the sofa towards the viewer, never breaking eye contact, until he’s climbing into the lens, essentially climbing into your soul, where he’d stay forever. Truly nightmarish stuff.

Ryan Murphy may occasionally play fast and loose with the truth, but sometimes fact is just as scary as fiction. This year’s eight-part season of American Crime Story was centred around the brutal murder of fashion icon Versace, but actually focused more on his killer, Andrew Cunanan. The show’s most disturbing flashback saw Cunanan, then a male prostitute, tape up the face of his client with duct tape — including his eyes, nose and mouth — before dancing around in a pair of pink pants to Phil Collins’ ‘Easy Lover.’ As the poor guy struggled for air, audiences may have felt short of breath themselves, unsure whether or not the man would be one of Cunanan’s eventual victims — you weren’t alone if you were feeling American Psycho-esque chills. The callousness of the scene is way more scary than anything in Murphy’s own American Horror Story.

There’s nothing like a good séance to get the palms sweaty, and Penny Dreadful — one of the few American shows committed to bona fide classic horror stories — can lay claim to one of the most effective possession scenes in small screen history. While attending a séance to summon an Egyptian goddess, the otherwise composed Eva Green is the designated host for a mischievous demon, who bends her every which way but loose, convulsing her in spastic jerks and speaking through her in tongues as a horrified crowd looks on. The trope is old and predictable — no one ever attends a séance on TV where nothing happens — but the spirited (ahem) performance by Eva Green lends the scene enough edge to give your goosebumps goosebumps.

Stephen King’s It – Pennywise in the Storm Drain

The noble art of clowning was all but destroyed overnight when this Stephen King mini-series turned a captive audience into a nation of coulrophobes. Tim Curry’s Pennywise was the original — and some would say superior — Pennywise, the demonic clown with a penchant for eating kids. His very first appearance, popping up from within a storm drain with an effusive “Hiya Georgie!” like it was the most natural thing in the world, remains one of the most indelible images in all of television. All of a sudden, kids didn’t want to be entertained by laughing maniacs wearing sinister makeup any more.

“You’re gonna die screaming but you won’t be heard…” Joss Whedon’s Buffy always fought the forces of evil with a sense of humour, but no one was smiling during ‘Hush,’ perhaps the most infamous and straight-up horrifying episode of the entire series. The demons of the week were a bunch of gnarly-looking ghouls known as The Gentlemen, who stole the voices of the entire town so no one could scream when their hearts were cut out. There’s something so primal and unsettling about seeing someone die quietly — a silent scream is an image that cuts to the core.

Threads — The Mushroom Cloud over Sheffield

Nuclear fallout was a very real and very feasible concern in 1984, and this unforgettable BBC drama pulled no punches in its depiction of the aftermath of atomic war. The entire film is packed full of horrifying images — charred corpses, dead children, panic in the streets, people eating sheep and rats, death, destruction and stillborn babies — but the one that really sticks in the memory, that kicked off the cold sweat to end all cold sweats, was the sight of the enormous mushroom cloud that appears on the horizon, signalling the beginning of the end. The apocalypse never felt so close, or so real.

Any aliens hovering over Earth in 2018 would probably do well to sack it off and give it a miss, but in 1983 mini-series V, first contact was made. The Visitors touched down on terra firm and came in peace… at least for a while. They looked like us, they spoke like us, and all they wanted was some crummy old minerals: definitely no organ harvesting or enslaving on the agenda here, no sirree. Mild-mannered TV cameraman Michael Donovan, however, managed to sneak on board a mothership, and after an altercation with an alien, discovered they were all wearing human disguises — a fist-full of loose flesh revealed the Visitors as a race of carnivorous lizard people, complete with piercing reptilian eyes, flicking tongues and green, scaly skin. Few scenes have come as close to replicating that shocking trauma since.

There’s a reason why kids TV shows don’t often do Halloween horror specials, and if the reason is not immediately obvious to you then you probably shouldn’t have kids. None-more-80s moral barometer Punky Brewster took an odd swerve in the episode ‘Perils of Punky’: whereas viewers would normally watch spunky youngster Punky learn important life lessons via the good work of friends and family, this Halloween special thought raw fear was a more effective way of getting kids to pay attention. They were right: as a mysterious evil demon picked off Punky’s friends, young audiences were treated to shots like the one above, of Punky’s friend Alan, deformed with rotten teeth, trapped forever in a rock face. You didn’t get that sort of stuff on Sesame Street.