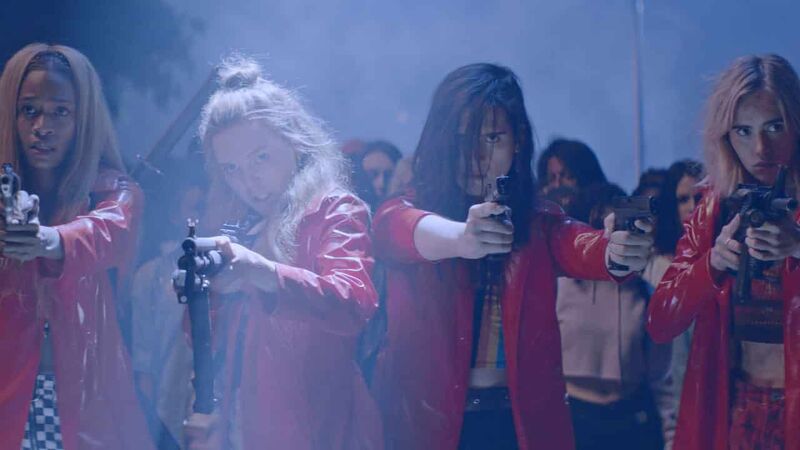 In the wake of the #MeToo movement, a number of films have emerged that highlight the plight of women. Harley Quinn actress Margot Robbie recently told FANDOM that the first film from her production company, Terminal, was, for all intents and purposes, fast-tracked as a direct result of what was happening in the wake of the Harvey Weinstein accusations.

And then there’s recent rape-revenge horror Revenge, which uses an oft-criticised subgenre to push its not-so-subtle agenda. Namely, how women are expected to behave in one way and then are blamed and punished for it. Assassination Nation is another film in that vein. Written and directed by Sam Levinson, son of Barry ‘Rain Man’ Levinson, the film looks at the moral breakdown of a small town called Salem, depicting a descent into violence after a data hack that brings the town’s secrets to light.

A bit Heathers, a bit The Purge, the stars and creative forces behind the film took to the stage at San Diego Comic-Con to reveal some of the film’s own secrets, unveiling an impressive tension-filled single-shot clip that sees the four main female protagonists – played by Suki Waterhouse, Hari Nef, Odessa Young, and Abra — stalked and terrorized by masked raiders at their home.

Director Sam Levinson said of the clip, “The idea is we wanted to show home invasion in a way we hadn’t really seen before. It was a metaphor for the internet. No matter how many doors you lock up, there’s always a way to get in.”

Joe Russo, one-half of the fraternal directing duo behind Avengers: Infinity War and whose company AGBO bought the film, called the scene “exceptional filmmaking” and talked about his keenness to support independent film.

While the panel — which included actors Bill Skarsgard, Suki Waterhouse and Hari Nef as well as Russo and Levinson — talked a lot about the film’s theme of social media, it was the depiction of women in the film that struck a chord with Waterhouse.

“There’s no sheen, there’s no sugarcoating,” she said. “We’re messy girls, we mess up. We’re like, f–k guys, but we also we really want guys to like us and fancy us. The thing I really liked about our characters is these four girls stay really, really close. There’s no fighting. We never turn against each other. That was a really cool thing with all the stuff going on. That was a really strong message that came across.”

For Levinson, the realistic, sympathetic portrayal of female friendship was tied into addressing issues around social media.

“I think so often there’s such judgment passed against young people for using their phones,” he said. “This idea that they’re narcissistic, they’re solipsistic. But I could never quite figure it out; they didn’t build Facebook, they didn’t build Snapchat, Instagram. It all existed before they even got there.

“So it’s this impossible position that you’re placed in as a young person. I think that so often films approach it with such judgment and there’s an unforgiving nature to the way the media tends to portray young people. So I just wanted to do something where these kids are as messy as they are and as they wanted to be, and they were able to make mistakes and we were still able to love them.”

All We Need Is Empathy

Levinson finished by saying the film was a message to society. “I wrote this movie two years ago, and we shot it 18 months ago,” he said. “What I was writing about at that time, and it’s still true now, there was an anger and a vitriol that’s brewing in this country and a lot of it comes from the inflexibility of our personal opinions. What I wanted to do was dive headfirst into the debates that we’re having online right now and in this country. And talk about how we connect with one another.

“I think at the end of the day this film is about empathy. It’s about how if we’re able to put ourselves in someone’s shoes, whether we agree or disagree with them, we’re able to find common ground, we’re able to move forward. If we can’t empathise with one another, then we’re forever going to be in a standoff. And standoffs normally don’t end well. I think that’s what this film is about. There’s a lot of heart to it. My hope is that we can begin to listen to one another a little bit more.”

Assassination Nation hits screens on September 21 in the U.S. and November 23 in the UK.