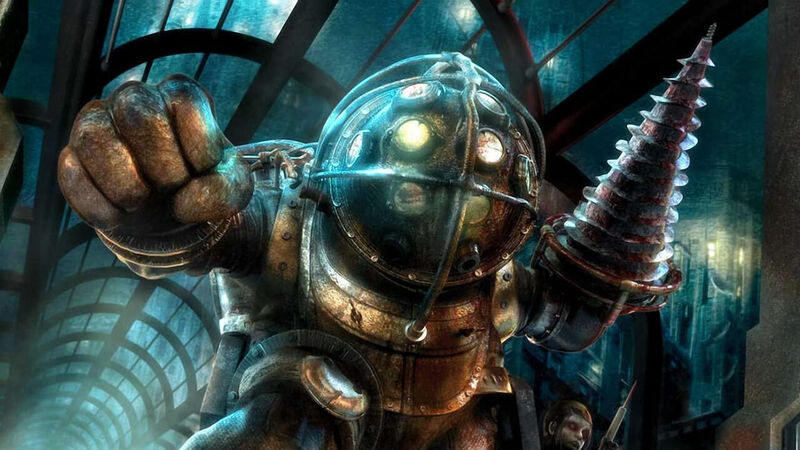 BioShock made a huge impact when game developer Irrational Games first released it in 2007. The game is a narrative-driven first-person shooter set in the wonderfully designed utopian underwater art deco city of Rapture. Most first-person shooters may be narrative-driven, but BioShock places more emphasis on plot and world design than most games, particularly when compared to other games at the time. Most notably, the game is different because it showcases its dense philosophical and literary references and inspiration.

The biggest influence on BioShock is author Ayn Rand. Rand wrote four novels in her lifetime. One of these, The Fountainhead, is the story of an architect who refuses to have his artistic integrity and individuality diminished for global success. Her most recognizable work, Atlas Shrugged, was her last and most successful novel. The book tells the story of John Galt, a businessman who casts aside American business traditions and sets about a plan to “stop the motor of the world”. Much of Rand’s writing tells of men challenging society’s traditions, bringing the conflict of individuality versus collectivism to light.

BioShock takes Rand’s ideas to craft its narrative and world in which the gamer gets to explore. Rapture’s founder Andrew Ryan is himself a representation of Ayn Rand, albeit a gender swapped one. He is an amalgamation of The Fountainhead’s Howard Roark and Atlas Shrugged’s John Galt. Ryan saw the problems with the world and decided to cut ties with it rather than help fix a damaged system. “I chose the impossible… I chose Rapture,” Ryan proclaims as players are first shown Rapture’s sprawling underwater cityscape.

There are other important characters who embody Rand’s characters and drives. Doctor Steinman, a plastic surgeon and Sander Cohen, an artist, have a lot in common with The Fountainhead’s Howard Roarke, although a much darker take on the architect. Steinman and Cohen both desire to keep their artistic integrity and refuse to compromise. This leads to both of these men foregoing their humanity as they torture and murder citizens of Rapture in the name of art.

The references to Rand’s works are too numerous to mention all of them here, but one quick note — your guide through Rapture, the character that helps players throughout their adventure in BioShock is named Atlas. He tasks you with finding his wife and daughter to help them all escape Rapture, so BioShock’s Atlas metaphorically carries the weight of the world on his shoulders. Atlas, as it turns out, was playing us the whole time. He is actually an industrialist, Frank Fontaine the “head” of Fontaine Futuristics. Both these names serve as references to the Rand novels that most impact the game.

Randian Objectivism plays a very important role in shaping BioShock and Rapture’s morality. The philosophy in Ayn Rand’s works, in particular, The Fountainhead and Atlas Shrugged, posits that a man is worth what he can offer society and not how much capital he has.

Ryan envisioned Rapture as a safe haven for like-minded folk away from the world on the surface which, in Ryan’s view, was not serving the common man as he ought to be served; “is a man not entitled to the sweat of his brow?” The world has become awash with religion, politics, and imperialism everybody works to serve others and be served by others, not for themselves. Rapture is, at its core, the embodiment of Randian Objectivism complete with all its flaws.

While perhaps idealistic and noble in intent, what Ryan doesn’t predict, be it through some oversight or naivety, is that there are flaws in this ideology. The cracks in Ryan’s utopia unravel both physically and metaphorically. As the city crumbles under the water’s pressure, so too does society crumble through lack of structure. You cannot have a functioning society without some sort of hierarchical structure, even in a city as fantastical as Rapture. BioShock points out the flaws in Randian Objectivism — no matter how wonderful a place is, somebody will have to be held accountable for the city’s welfare, maintain its pipes and scrub its toilets. In a city built to have man serve only himself, it’s no wonder that the people revolt and Rapture falls.

Another important influence on BioShock is George Orwell’s dystopian novel, Nineteen Eighty-Four. The book is set in Air Strip One, which was formally Great Britain. In a world with severe class divides,political propaganda rules the Inner Party, Outer Party, and Proles (upper, middle, and lower class). Two other big themes in Nineteen Eighty-Four are surveillance (“Big Brother is watching”) and mind control or brainwashing. Thematically, Nineteen Eighty-Four is the polar opposite to Ayn Rand’s works.

One could argue that while Andrew Ryan follows Randian ideas, Frank Fontaine is his opposite, holding very Orwellian ideals. Frank Fontaine wants to industrialize Rapture with a class system and hierarchy. To do this, he initiates a power struggle to take control away from Ryan.

The “Would You Kindly” Phenomenon

BioShock explores choice and free will as when you get a Little Sister, you can choose what you do with them. Do you serve yourself and harvest them or do you save them? BioShock is full of moral choices like this, so it’s a shock then when the “Would you kindly?” moment reveals that you have been under mind control the entire time and Fontaine has been controlling your every move, all with a simple phrase that has seemed unremarkable until the revelation of what was really going on. “Would you kindly?” also serves as a very meta reference. Games, in general, ask players to commit all sorts of atrocities, often times for very menial repetitive fetch quests. As gamers, we oblige simply because we are asked to follow instructions and never really question why or give any thought to the contrary.

Inspired by Another Game

BioShock doesn’t just take inspiration from literary sources. The game owes a lot to its spiritual predecessor, System Shock 2. The game was Irrational Games’ first release after its formation in 1997. A mix of RPG and first-person shooter, System Shock 2 told its story and back-story through radio chatter and audio logs, and it also had a surprising twist at the end. These elements were all refined and carried over into BioShock and later into its sequel BioShock Infinite. Without the critical acclaim that System Shock received, BioShock may never have existed, and the face of gaming today would be a very different one.

So “would you kindly” give BioShock the credit it deserves?

Dan Pullinger
Disgruntled Shadow Moses Employee
A geek who likes to think of himself as a writer although he sometimes works as a runner for the BBC and sometimes works a normal job. Film graduate, Hideo Kojima and David Lynch aficionado, only pretentious when drunk and rambling about how Eraserhead could change the world.