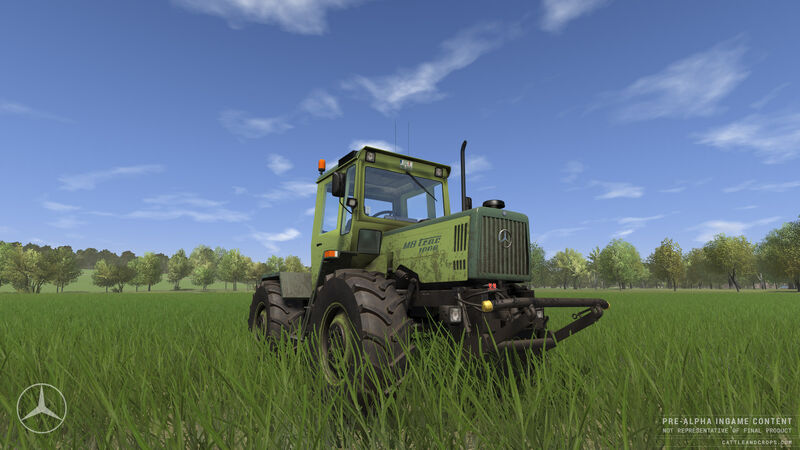 Every month we choose a video game project on Kickstarter that piques our interest. Our Kickstarter Game of the Month for October 2016 is the farming simulation, Cattle and Crops.

There are of course several farming simulation games available already, but the ultimate goal of Cattle and Crops, according to developer Masterbrain-bytes, is to create a game as close to reality as possible. The game will be scalable for both casual players and farming enthusiasts. The graphic style will simulate reality as well, using the latest technologies.

The development team for Cattle and Crops subscribes to the “play how you want to play” philosophy. Players can choose a more arcade-like, automated game experience, and watch as staff complete the tasks assigned them, such as transporting fruit, feeding animals, harvesting fields and more. Alternately, they can go hands-on and perform all the tasks themselves. Players must manage work time and salary in an attempt to keep their employees happy.

One possible job choice in Cattle and Crops is that of a rancher. As a rancher, players will raise, breed, buy and sell cattle. Mucking stables might not sound fun, but that’s what staff is for, right? Players can even name the animals if they so desire.

Cattle and Crops features a dynamic weather system that can affect crop growth and survivability. Luckily, this can be turned off in the settings if it all becomes too difficult to manage, or storms keep wiping out your crops.

Cattle and Crops even lets you driving your very own tractor. Vehicle features include adjustable mirrors, usable doors and a customizable three-point hitch. Cup holders are extra.

There is also a sandbox mode for new players who just want to have fun without the stress of managing finances.

Cattle and Crops doesn’t yet have a release date, but Early Access could be available as early as Q1 of 2017. Visit our Cattle and Crops community or visit the Kickstarter page for more information.

Dwarrows is a town building game under development by Lithic Entertainment but unlike most games in this genre, Dwarrows allows players to go on adventures and explore the world around them. Take control of three uniquely skilled characters to leave the confines of the town, explore the lush forest surrounding it, and work together to solve puzzles. You can also gather resources to build your town, invite the wandering elves to join it, and discover treasures within the ruins of a forgotten civilization.

Dwarrows is expected to release Q2 of 2017 and will be available via Steam. Visit the Kickstarter page for more information.

Dual Universe is a Sci-Fi MMORPG sandbox game in which everyone shares one single persistent server shard. There are no instances, zones or transitions. Everything in Dual Universe is player driven and player maintained. This includes the economy, cities, stations, politics and warfare. Everything in the world is also fully editable with no limit in size. There will be both areas of world PVP as well as “safe zones.” Players can build remote bases on distant planets or moons.

Players can even build remote bases on distant planets or moons. Take over the universe, or move on to another. Everyone initially starts on the same planet  but through progression, achievements, and hard work, players will find ways to reach the stars.

Dual  Universe promises to be a game of near-limitless size. The developers at Novaquark believe they can make this dream a reality due to their “new groundbreaking new server and voxel technologies.” This technology supposedly allows the game to handle thousands of players in a single area without the related issues you would expect in an MMO. More details are available at Kickstarter as well as the official site.

While this isn’t actually a game, you’ll still find this Kickstarter project listed under Video Games. This is because the project is closely tied to video games and those who play them. Gamers for Good is a 501c3 non-profit organization that was put together to support people in need. Their missions is to help gamers give back. They do this through connecting gamers with service opportunities and providing education regarding ways gamers can and are giving. Their first project, the

Their first project, the KKG Artbook was a successful hit. G4G raised over $67,000 and made donations to both Game Changer and CureASPS on behalf of their backers.  The book was initially created to raise funds to help Kevin Griffith, a Blizzard Entertainment developer, who was diagnosed with ASPS. Unfortunately, he passed away before the project was complete and never saw the finished book that was dedicated to him.

The new book, Undertale, is sure to have at least the same quality as it’s predecessor and a minimum donation of $33 (plus shipping) will secure you a copy. Over 900 pieces of artwork have already been donated by more than 450 artists. Any money pledged over the cost of having the books created and shipped will be shared among three charities: Anxiety Gaming, Child’s Play and Take This.

Every dollar helps and they are taking donations of any amount. You can find out even more about the project on their official site. Donations can be pledged at Kickstarter.

Cattle and Crops – A realistic farming simulator that allows players to grow crops, raise cattle and manage staff and finances.

I.C.U. – An upcoming horror game in the new Stream First genre. Viewers and streamers can play together at Twitch.tv.

Dual Universe – Create vasts empires, or fly solo in this new sandbox game, where the sky isn’t the limit, imagination is.