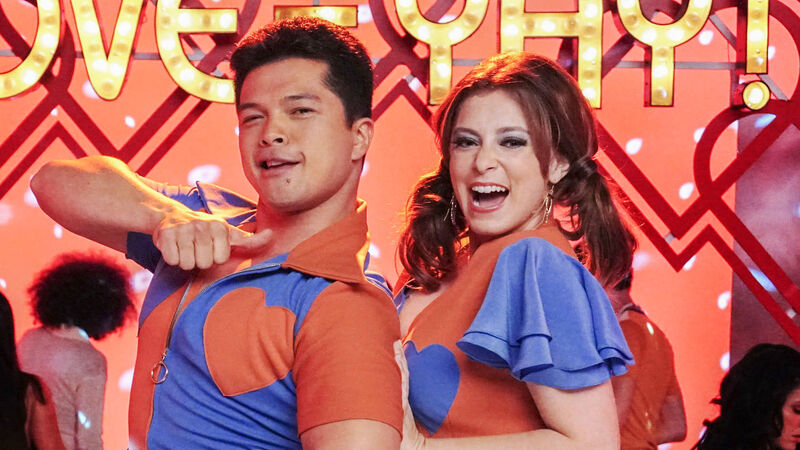 When we last left the kooks on Crazy Ex-Girlfriend, they were dealing with a new threat. Nathaniel Plimpton, jerk lawyer extraordinaire, became the new boss at Rebecca’s law firm. Rebecca and Josh rediscovered their love for one another, but Nathaniel’s workplace bullying made Rebecca realize she’ll have to find a new balance between work and her relationship. But only some of that is relevant to this week’s packed episode.

Well, I learned my Yiddish for the week! “Shayna punim” means “pretty face.” And what’s not to like about Josh’s pretty face? This episode starts sowing seeds of insecurity in Rebecca and Josh’s romance. They’ve gone public on Facebook and every other social network you can use to self-promote. When Rebecca‘s family invites her back to her hometown of Scarsdale, New York to attend a cousin’s Bar Mitzvah, Rebecca sees it as another opportunity to show people just how happy she is with Josh.

The reality, we soon see, is that it’s all a show. Their attendances is all about optics and validation, which Rebecca so desperately wants. Heather, ever the sarcastic millennial voice of reason, calls her on it immediately. When Rebecca asks Heather how she knows it’s about insecurity, Heather gets one of the episode’s best lines: “I actually started with a hypothesis and backed it up with a Vox article. It’s standard scientific method.”

The episode’s first song is a disco tune complete with amazingly hideous bell bottom jumpsuits. It’s a fun representation of the reality distortion field Josh and Rebecca are creating together. They are lost in it, but to everyone else (including us) it’s a bit grating. I should also note that Vincent Rodriguez III and Vella Lovell show some serious dance moves here.

But before our lovebirds leave for Scarsdale, there are some loose ends to tie up. Josh visits Father Brah to express some worries about the upcoming trip. Father Brah might be the kind of guy who loses his weed stash in a tree, but he’s no simpleton. He knows darn well that Josh is starting to define himself through his relationship to Rebecca. Meanwhile, Rebecca fesses up to Valencia about the Josh situation. As it turns out, Valencia didn’t just vanish for two episodes for no reason. When she heard about Rebecca and Josh, she “had to take a few days.” She is upset but appears to be dealing with the news pretty well, all things considered.

Now, to the nougaty center of the episode: Scarsdale. Rebecca returns to her childhood home with Josh in tow, and her mother Naomi (the great Tovah Feldshuh) is on her case immediately. But Josh quickly wins Naomi’s favor by helping her in the kitchen. Later, at the Bar Mitzvah, he’s the life of the party. But this doesn’t match up with Rebecca’s desires at all — she wanted to sit in the corner and be too cool to join in the festivities. She expresses that her interpretation of Judaism is all misery, and the party is a sham. What better way to say it than with a song?

“Remember That We Suffered”

There she is, folks: the one and only Patti Lupone. She plays Rabbi Sherry, who in Rebecca’s mind is just another manifestation of misery. But Rabbi Sherry sees what’s going on here. She blinds Rebecca with this science: “If you hate yourself it doesn’t matter how great your boyfriend is. You’ll always be unhappy.” It’s a bitter pill, but something about the Rabbi’s advice strikes a chord with Rebecca.

It’s odd — Rabbi Sherry is the second religious teacher in this episode to express genuine concern for our characters’ mental and social health. It seems almost at odds with the show’s darker tendencies, but I don’t think this is necessarily a pro-religion show. Josh doesn’t struggle with his Catholicism; he struggles with his insecurities. Rebecca thinks she’s struggling with Judaism and Jewish culture, but she’s just struggling to lift her emotional baggage. It’s refreshing how Crazy Ex-Girlfriend takes a mostly uncynical approach to religion, while still keeping it mostly at arm’s length.

Let down by their trip, Rebecca and Josh return home to West Covina. For the first time in a long while, Rebecca goes to her psychiatrist, Dr. Akopian. And just when Rebecca is on the verge of a mental health breakthrough, Josh interrupts their appointment with… a marriage proposal. Of course, Rebecca agrees. Oh, crap. Here’s something we don’t often see — this show is a romantic comedy, but when the engagement happens, it’s not a cause for celebration. In Crazy Ex-Girlfriend, it’s a frustrating diversion.

From day one, the romance between these two characters has been a fantasy. The show always presents more plausible or healthier alternatives, but Rebecca is just too dependent upon the fantasy for her happiness. How could she say no a marriage proposal from Josh Chan? She can’t, especially when he presents the ring that’s been a coveted heirloom in Rebecca’s family. You know, the ring he got from Rebecca’s mom Naomi because this proposal was Naomi’s idea.

I don’t know how to feel about this yet. It’s a potentially huge development for the show, but it also means that Naomi could become a villain. I know she has good intentions for Rebecca, but villains often operate under the delusion that what they’re doing is best for people. But now Rebecca’s mom is kinda-sorta blocking the plot. And now Josh and Rebecca’s engagement is set up to fail. I’m worried, but I feel like the show wants me to be.

In this episode’s B-plot, Darryl and Nathaniel engage in some psychological warfare in the office. We find out that Nathaniel’s bigshot father may be emotionally abusive, which leads Nathaniel to eat a bunch of Darryl’s candy. That, in turn, causes Nathaniel to fall off his treadmill and knock out a tooth. This plot humanizes Nathaniel a bit, and he and Darryl have a short heart-to-heart about their disapproving dads. (The series has also been setting up a story about Paula’s negative relationship with her father. There’s a definite trend here.)

With Nathaniel partially defanged and Rebecca lost in the throes of romance, will we see more progress on the next episode? Tune in next week, fans.