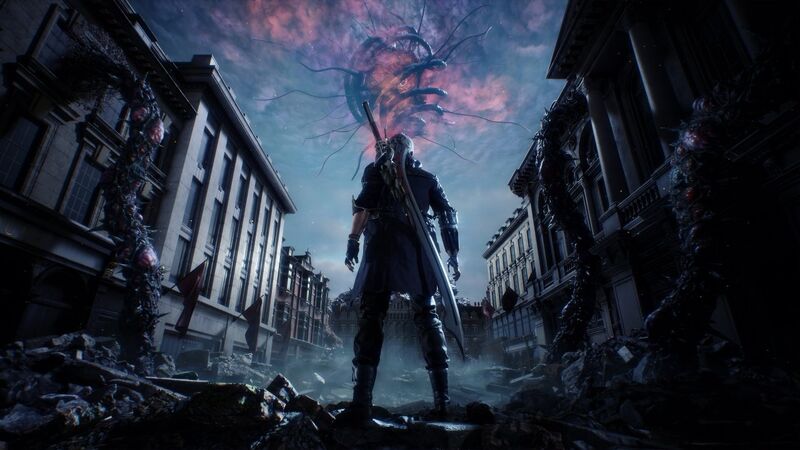 Some games ooze so much style that it’s as if they reach out from the screen and yank you head first into their atmospheric worlds. Devil May Cry 5 is one of those games. After putting on our headphones and picking up the controller, we instantly find ourselves lost in Capcom’s demon-infested fantasy. As we run through the dimly-lit and hauntingly still streets of London, it takes only seconds for us to leave the bustling convention centre of the real world far behind.

Put in the shoes of the cocky trenchcoat-wearing upstart Nero, we continue to sprint across this uncharacteristically quiet London. Hopping along with a double jump that elicits a satisfying Nightcrawler-esque BAMF, it’s not long before we spot a crashed double-decker bus and an abandoned ambulance. Beside them is a street filled with families frozen in a horrific, Pompeii-esque tableau.

Yet, before there’s time to contemplate the eerie events, the air of foreboding silence is suddenly filled by THAT crunching DMC guitar sound and in wisp of smoke, four demons appear before us.  As they snarl and swing their blackened blades and the palm-muted metal riff ramps up into a distortion-soaked crescendo, Nero grabs his sword and smirks.

From that first battle two minutes into the demo, the action never really lets up — and given how fluid demon-slaying feels here, that’s A-OK with us. While it’s been a decade since the last “proper” numbered Devil May Cry outing, the combat and tone of 5 still feel comfortably familiar. Encounters here play out like a blend of Ninja Theory’s 2013 DMC reboot and the PS2 games of old.  And once we start slicing up hellspawn, we effortlessly fall back into that old Devil May Cry rhythm.

Just like in the original game, demon fighting in Capcom’s latest pushes you to keep those killer combos going for as long as humanly possible. Diving into enemies with a flurry of sword slashes, we launch an axe-wielding foe straight into the sky, keeping its corpse suspended in mid-air by bombarding it with a sea of bullets.

There are, of course, a few new toys at our disposal. Armed with a speedy dash, players can swiftly send their demon hunter hurtling from one side of the battlefield to the other. Like in older games, you can also grab enemies and pull them towards you, keeping that demonic dismemberment going even while you’re hurtling into the air.

These brittle little weapons give Nero the ability to mix and match combat styles on the fly, with the standard Overture arm letting you unleash a blast of lightning from the prosthesis. Yet, while a quick tap of ‘B’ sends a slither of shockwaves coursing towards your enemies, Overture really proves itself useful after it has been fully charged. Once charged, Devil Breakers can be used to save your bacon by unleashing a devastating, single-use attack.

Bizarrely, the prosthesis’ main ability can be ignored too, with players able to propel their hurtling limb directly at advancing foes instead — like a fist full of fireworks. If you get grappled and caught in a particularly hairy encounter, you can even detach the limb, reptile-style and make a bid for freedom.

Don’t Get Too Comfortable

By the end of our demo, we were firing these limbs at enemies left right and centre. Thankfully for poor one-armed Nero though, Devil Breakers aren’t in short supply. As we continued our journey through London’s demon-infested streets, we’d regularly meander down an alleyway or smash up some surroundings and happen upon all four types of Devil Breakers.

While it was only a brief taste of DMC 5,  the demo hinted at a few basic “puzzle” elements too, with Nero tasked with tracking down some gross-looking demonic Nidhogg hatchlings and inserting them into a bleeding, tendril-sprouting cocoon in order to open up new paths. With a new hellspawn littered street to run down, its right back to business. After encountering a new type of flying enemy and carving them up, we eventually make our way to a ruined cathedral — and things become suspiciously quiet once again. Right on cue, the second we run across its roof, an ambulance comes hurtling through the air towards us, and as Nero nonchalantly emerges from the wrecked vehicle the source of London’s misery soon becomes apparent.

With a giant demon towering before the demon hunter, a cutscene shows Nero giving the fiend some suitably DMC sass and we’re thrown right into a boss fight. It’s the first part of the demo that offers any real challenge, with the dragon-scaled behemoth slapping us around left right and centre before destroying the cathedral rooftop with his gigantic fist, sending us both crashing down into the pews below.

The Same Charm We Know and Love

From what we’ve seen so far, Devil May Cry 5 does very little new. Yet, when a game offers combat this fluid and pacing this slick, it’s hard to care. We came away dizzy from our demo, sporting a suitably smug Nero-esque grin. While the creator of the original Devil May Cry has been keeping the genre alive with the likes of Bayonetta and Metal Gear Rising, nothing since  has quiet managed to feel like Capcom’s genre-birthing hack and slash.

It’s with a relief then that Devil May Cry’s return is not only visually stunning, but also looks to capture that cheeky early-2000s charm that has been sorely missing from Triple-A games of late.

It only took a few seconds of play for us to leave Cologne’s noisy demo booth behind and get lost in Devil May Cry 5’s gothic world.  And now, we’re just sad we have to leave this world once again.