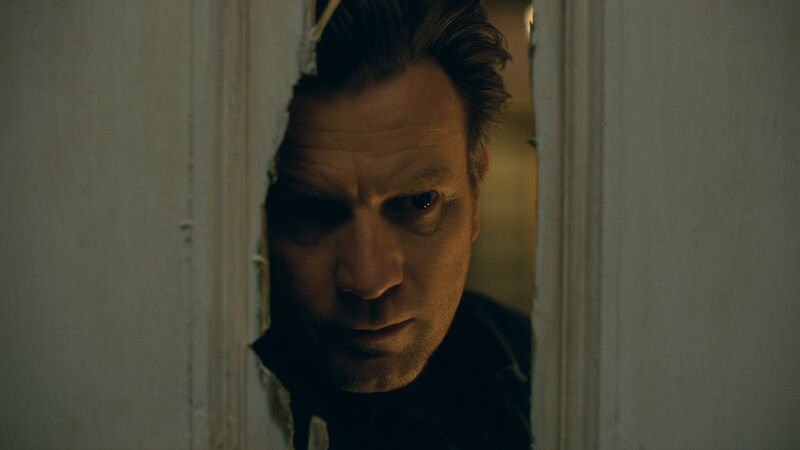 King rather famously disliked Kubrick’s 1980 film, based on King’s book, even as the movie became an iconic part of horror history. King’s follow-up book, Doctor Sleep, showing what happened to little Danny Torrance from The Shining after he grew up, was , not surprisingly, a continuation of the book specifically, not the film – which had some major changes at the end from the source material.

But director Mike Flanagan (Oculus, The Haunting of Hill House) approached his film version of Doctor Sleep as a reconciliation of the two beloved versions of The Shining. Starring Ewan McGregor as Dan Torrance, it’s an adaptation of King’s book, but it’s also very much positioned as a follow-up to Kubrick’s film, using the memorable imagery from that movie as its basis and the events from the film as its canon. Yet Flanagan managed to get King himself to give his blessing to the project and whole-heartedly support it, which was quite notable given King’s public scorn of The Shining movie for so long.

Fandom spoke to Flanagan and Doctor Sleep costar Rebecca Ferguson about how the story approaches Dan Torrance as an adult, the depiction of Ferguson’s villainous Rose the Hat, and more.

After a 1980-set prologue, Doctor Sleep catches us up with an adult Danny Torrance in a very dark place. He’s living a drunken, wasted life, hounded by ghosts from the past – both real and those in his mind – and seems doomed to repeat the mistakes of the past.

And while you’re not likely to relate to Danny’s psychic Shining abilities, and hopefully not to having a dad who tried to murder you, certainly his struggles with alcoholism and lingering issues with his parents long after childhood are things viewers can connect to.

Said Flanagan, of Danny’s state of mind, “I think that’s the heart of the story, at least as King wrote the novel. What I love about King’s work, even his big, supernatural, crazy ideas, is the best ones are things that are totally relatable. The Shining is the story of this ghostly woman in the bathtub, and yeah, it works. But it’s an even scarier story about alcoholism. Ewan McGregor and I talked about this a lot when we met to talk about the project, but what’s great about the way King introduced Dan in the book is that you meet him at rock bottom and you see the consequence of having lived this life of intense post-traumatic stress and domestic abuse. You talk about adult children of alcoholics and you look at Dan and it’s like ‘Yup, I get it.’ What I loved about it from a structural point of view is that when you meet a character at rock bottom, the only journey you can take with them is upward. The journey of Dan climbing out of that pit up the cliff face towards a purpose, that’s what resonated with me and it’s what resonated with Ewan.”

The relentless Rose the Hat meanwhile is very much driven by her own addiction that she and her fellow “True Knot” members have to the “steam” they feed off of that those with the Shining possess – which leads her to the same young girl, Abra (Kyliegh Curran), who has psychically connected to Dan via their shared Shining abilities.

Regarding this addiction parallel between hero and villain, Flanagan noted that when it comes to the Top Knot, “While they lean into their addiction, they need it to survive as opposed to it being a threat to their survival.”

Said Ferguson, “If you have had addiction in your life, if you’ve battled it or been close to it, you understand how broad it is and how universal it is. They say one out of every four human beings has some form of addiction whether it’s shopping or sex or alcohol or drugs or whatever it is. So I love the idea that there is an addiction to the steam and that she definitely shows, especially when she hooks on to Abra, who is like a really old, good malt whiskey for someone who hasn’t had a drink in a long time.”

It’s clear from the get-go that Rose is far older than she appears, with her vampiric abilities letting her and the rest of the True Knot live very long lives, and Ferguson said she gave quite a bit of thought to all that Rose experienced prior to when we meet her in Doctor Sleep. “It was very important to me to understand her and also to grasp the time. Why am I the leader of the flock? I’m the leader of the flock because the eldest is on his way out and I need to take over. He’s teaching me his tricks. We were kind of Sherlock Holmes-ing our way back. “

Flanagan noted that as awful as the True Knot’s actions are, “They’re this really tight family unit. Something Rebecca did beautifully, early on she said ‘If I look at this as Rose being the hero of the story and doing anything to protect her family, that’s my way through. That’s how I can justify some of these horrible things I have to do.’ I thought that was awesome.”

Said Ferguson, “If I played the evil it just becomes animated. So what I needed to do was find those moments of endearingness and love. [True Knot member] Crow calls her “Rosie” – these kind of nicknames to each other, that relates to intimacy and a sexual relationship and love and caring for each other –  also how devastated they are when someone dies. There’s so much human touch to her. It’s just that they have decided to be turned into this semi-mortal life. But it doesn’t take away the human vulnerability of them as well, which I loved. That was my focus when it comes to the beyond evil action that they do. It’s hunting. I don’t know if you cry and eat a hamburger at the same time. I don’t. But that’s how they feel. And the younger they are, the steamier they are… So obviously they go for younger targets.”

Doctor Sleep is getting a lot of attention for seemingly doing the impossible – blending together Stephen King and Stanley Kubrick’s versions of The Shining with King’s blessing, after all of his decades of badmouthing the Kubrick film.

Flanagan said it meant a lot to him to accomplish this feat, noting, “As a fan of both the movie and King my whole life I always ached a little [at King’s distaste for the film]. I was like, ‘I just wish mommy and daddy would get back together and get along!’ But yeah I tried to approach the whole project as a fan first and as a chance to celebrate Kubrick and King. In that respect, I liked to look at the movie and — if I ever said the words ‘Sequel to The Shining,’ I’d start to throw up. That’s when the panic would set in. But I looked at it as a descendant of The Shining, and like any child, it has the DNA of its parents and its parents in this case are Kubrick and King. And we want to honor our parents and do them proud but we also have to carve out our own identity. That made it more palatable for me.”

Flanagan added, “I wanted it to feel like it came full circle. That even if it took those two paths that people have taken on the story and inched them together a little bit, then it was worth doing. It was something that was a real gift to me as a fan. I can see this weird movie where it all kind of works. I believe it can work together and if I can get that movie out of my brain and onto the screen, maybe other people can go ‘Yeah, it kind of works!’ That was the plan but I have felt like I want to throw up for the last year and a half. And that isn’t letting me go yet. It won’t until the audience gets their hands on it.”

As for what it meant to act in a film with such luminaries as King and Kubrick looming behind it, Ferguson said it felt, “Terrifying, in the sense that it comes with such expectations that when I was given the role there was a bit of me going ‘I don’t want it, I don’t want it! …I want it.’ Because it’s so iconic – the phenomenon of making something of Stephen King’s and obviously Kubrick is Kubrick, but we need to see it as something separate. We’re not remaking something he has done. We’re visiting areas where they have been and locations are reappearing and recurring but I myself get to play a completely new character. It’s like children when parents go ‘Don’t put your foot on the street!’ and you go ‘I’m gonna! I’m gonna!’ That’s kind of Rose in this environment. ‘Don’t go into the hotel.’ ‘What is this? I’m going. What is this axe?’ Everything is a character in this film. A typewriter! She can sense the history. It’s dark. She’s excited by it.”

Flanagan signed onto Doctor Sleep at the beginning of 2018, just a couple of months before Warner Bros. released Ready Player One, in which a major set piece involves the characters going into a VR recreation of the Overlook Hotel, as seen in Kubrick’s The Shining.

So what did it feel like to not only now have Kubrick and King as presences around the project but to be following up Steven Spielberg’s recreation of the famous set?

Flanagan recalled being asked, “’Oh my god, have you seen Ready Player One!? It’s got a cool Shining thing!’ And I’m like ‘Nooooo!’ So I went to the theater… and feeling like I was about to throw up was normal at this point! I was already in the script and in the world.”

But once he actually watched the movie, Flanagan said, “The coolest thing happened. The minute the Overlook hotel came on screen, the air in my theater changed. Everyone smiled. It was awesome. That’s the amazing thing about The Shining. The Overlook exists in our imagination and our memory, all the way back to our childhoods. And even though what you experienced there was so traumatizing, you smile. As I sat in Ready Player One, I sat up in my seat and I grinned. The sequence was over and I wanted it to keep going. Then I felt like we made a good choice. It made me feel better. Because I walked out of the theater wanting to go back to that hotel. I was like, ‘This is great because we’re going to be able to provide that.”

Doctor Sleep opens in US theaters on November 8th.