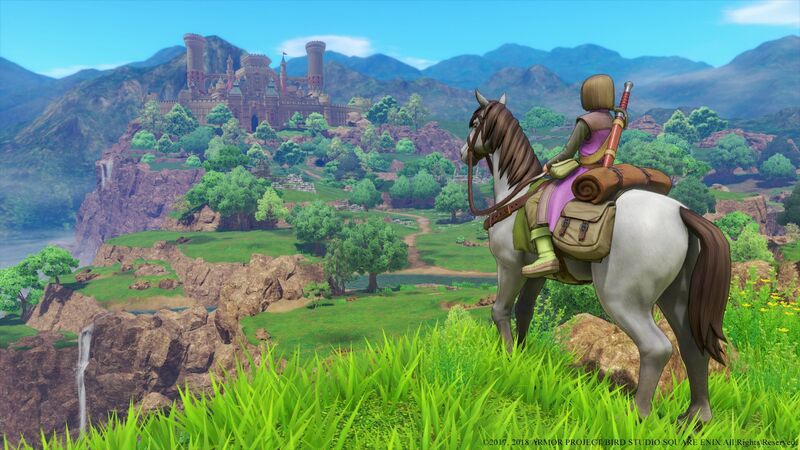 When it comes to beloved game franchises in Japan, there are few series that inspire as much feverish devotion as Square Enix’s Dragon Quest. With kids and adults alike famously bunking off school to play each new highly anticipated installment, its iconic Blue Slime mascot is a character that commands almost Mario-like levels of reverence in the land of the rising sun.

Hell, Square’s seminal RPG is even giving Disney a run for its money, with Dragon Quest soon getting its very own attraction at Universal Japan. Over here, though? Well, that’s a very different story. Outside of fan circles, mentioning Dragon Quest in the West is more likely to elicit bemused shrugs than excited shrieks. Now though, Square is hoping to change all that.

After a decade of being shackled to Nintendo handhelds, the publisher has opted to bring the series back to consoles. But is a newly-added HD sheen enough to finally win over western audiences?

UPDATE: Dragon Quest XI is finally here — and so is our review.

The first thing that might strike newcomers is how weirdly familiar all of Dragon Quest XI’s brilliantly drawn characters feel. Drawn by legendary Dragon Ball creator, Akira Toriyama, this cel-shaded world of monsters and adventurers immediately pops on screen, exuding a sense of warmth and playfulness that instantly sets it apart from its JRPG peers.

And make no mistake – despite the marketing hints otherwise — Dragon Quest XI is very much a traditional JRPG. While early trailers showcased a hero on horseback exploring sprawling landscapes, this definitely isn’t the Breath Of The Wild-beater that many hoped it would be.

For starters, the world players traverse is far from open. While you do get to trot along some pretty-looking locales on the back of a trusty steed, these areas are essentially just fully realised versions of the classic JRPG staple – the world map.

Like the games that pioneered the genre all those years ago, Dragon Quest XI once again sticks to the series’ tried-and-tested turn-based battles. Like in the classic Final Fantasy games, players are presented with your standard “attack,” “magic,” and item selections.

As genre veterans will expect, there is an alternative. If you want to grind for that juicy XP but don’t want to waste precious time selecting the same attacks, you can set your party to auto-battle, with a tactics menu allowing you to tweak which party member focuses on healing and who remains the aggressor.

It felt serviceable enough, but even when playing with a full party, battles were surprisingly simplistic. Without any summons or timed button-press attacks thrown into the mix, the combat here looks to be as basic as turn-based battling gets.

While we’ve only spent a couple of hours with Dragon Quest XI, its combat felt disappointingly pedestrian after the free-roaming showdowns of Ni No Kuni II. What it lacks in innovation though, it at least makes up for in charm. Enemies are full of personality, with tear-drop shaped slime monsters gleefully bouncing around the battlefield before unleashing their equally adorable attacks. Whether it was animated cacti, angry-looking birds or slightly more furry foes, each enemy was always a joy to behold, with unique animations and facial expressions really making each one feel wonderfully distinct from what came before.

Still, battling in Dragon Quest XI isn’t an entirely old-school affair… Or at least how you pick a fight isn’t anyway. In a nice touch, those endlessly irritating random battles are now a thing of the past. As you gallop across each monster-infested section of the world map, you’ll see your colourful-looking foes waddling along the battlefield in plain sight.

This means it’s up to you whether you want to bother engaging them, meaning that being dragged unwilling into combat is now a thing of the past. As well as choosing to ignore these foes, you can even opt to go one further and really ruin a monster’s day.

While galloping around the world map, squeezing the right trigger allows your horse to speed up and charge straight into unsuspecting little critters, instantly sending enemies flying and stunning them.

Story-wise, Dragon Quest XI looks to offer the same kind of genre tropes. A boy from a small village who discovers he’s important? Check. An evil King that wants to thwart the powerful hero? You bet. While the tale it looks to tell may be as traditional as they come, thankfully, Square Enix has opted to tweak it a bit for western audiences.

Despite Dragon Quest XI launching last year in Japan without any voice acting, Square Enix has used that time to fully voice this story.

Like the Dragon Quest Heroes games before it, XI relies on a ye olde English voice cast to bring its anime-styled characters to life. It feels pretty bizarre to walk into a village and hear a farmer wax lyrical in a thick West Country accent. Still, it does add an undeniable sense of charm to what could have simply been walls of text.

That’s not the only tweak Square has made for us Westerners. In order to speed traversal up a bit, players can now dash around town, with a newly added camera allowing players more control of movement and even allowing them to take snaps of their scenic surroundings.

Other little issues have been ironed out in order to make the game feel more in line with modern experiences, with a newly simplified menu and cleaner UI thrown in for good measure. If that wasn’t enough to justify a year of waiting, Square has also rewarded patient fans with an all new hard difficulty setting – Draconian Mode.

For longtime fans of the series, more expansive environments and a shiny new HD paint job will probably be more than enough to justify a purchase. Yet, for newcomers, what we’ve seen so far makes this a harder game to recommend. Where Dragon Quest Builders showed Square steering the series into fun new territory, what we saw of the series’ eleventh entry looked surprisingly old hat.

While there’s certainly nothing wrong with a nostalgia-soaked JRPG, its hard to imagine Dragon Quest XI being the entry to finally break the West. From what we played, it looks like there’s definitely an enjoyable RPG here, but those looking for a more forward-thinking Japanese adventure may want to stick with Ni No Kuni II.