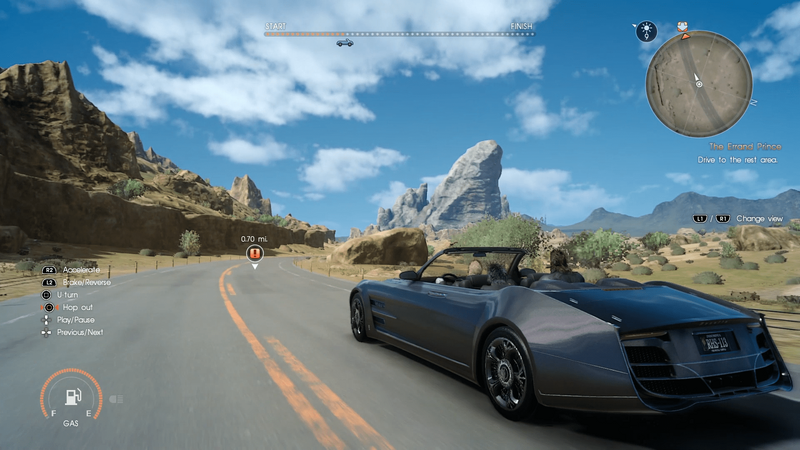 Final Fantasy XV’s side-story, Monster of the Deep, is set to launch in November for PlayStation VR. Initially the development team was working on a VR experience in the form of a shooter, where you played as Prompto and helped the main boys take down a Behemoth. But before this shooter experience, director Hajime Tabata revealed that the team had some different ideas for a VR game in mind. The most popular one was a car rally in which players would be able to drive all over the in-game world of Eos.

“The Prompto VR shooter that we created last year at E3, that was done about the span of three weeks,” Tabata said. “It’s like a showcase for the VR technology and platform. But we knew that if we wanted to make a full-fledged VR game based on battle mechanics of Final Fantasy XV, it will probably take at least two years just to do that.

“We felt, ‘Okay. Let’s take a step back and see our first approach, our first proper approach at VR. What can we do that’s within the realm of reality?’ We thought, ‘Okay. Let’s leverage the world of Final Fantasy XV that we created and create an immersive experience around that.’ Therefore, we arrived at fishing as the main gameplay began.”

“There were other ideas as candidates of what we want to do for the first VR project,” he added. “One such idea was like a massive car rally across the world of Eos, but when we started looking into that, that would probably take as long, if not longer, than creating a VR game based on the battle mechanics.”

Because creating this massive VR car rally would  have taken too much time, the team ultimately scrapped the idea in favor of something that fit within their timeline: and the fishing game was born.

“When we look at each platform, we look at the characteristics and we develop something specific for that,” Tabata explained. “For VR, gameplay mechanics like fishing or the massive car rally idea, the first and foremost idea is that, you, the player get into the world of Final Fantasy XV, fully immerse yourself in that environment, but also taking advantage of the fact that we have these four characters that people love and being able to interact with them. We thought, ‘Okay, fishing makes sense in terms of how it fits within that world, you as a hunter in that world kind of going through and exploring.”

So we won’t get that big Final Fantasy car rally, but we will get the chance to catch (and battle) exotic fish in Monster of the Deep.

“I think the story of Monster of the Deep is kind a supplementary side story to the overall main story of Final Fantasy XV, where the player is a hunter looking for this underwater monster,” Tabata said. “Over his or her journey of finding that monster, you’re going to encounter these other kind of monster fishes. So, it just kind of felt right.”