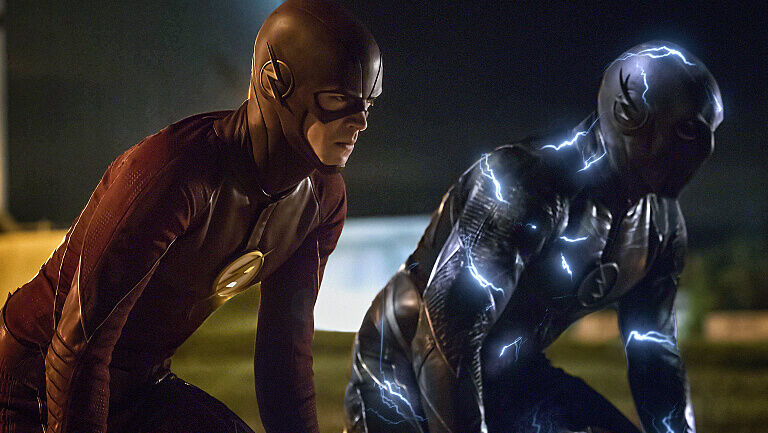 The past year has been a big one for our Scarlet Speedster. Flash has brought the multiverse into the running and introduced a deeper understanding of the Speed Force. Arrow may have the edge in grit and action but seeing Barry Allen race across the multiverse gave me chills for days. I have to warn you in advance, this article will contain spoilers. Do not read it if you haven’t seen the full season of The Flash.

Back at the start of the season, we are introduced to a Barry Allen who is struggling with the fallout of last season’s finale. With his father leaving the instant he was let out of prison, his trusted mentor turning out to be the killer of his mother and Eddie Thawne, his love’s love dying to correct his mistake, Barry decides to go it alone. Cisco joins Joe at the head of an anti-meta-human task force, Caitlin defects over to Mercury Labs as Iris grieves for her lost fianceé. But with the arrival of Atom Smasher, the crew came back together to protect their city. With Atom Smasher’s dying words, he warns them of a new threat on the way: Zoom. Despite Cisco apparently upping the S.T.A.R. Lab security, we are quickly introduced to the newest character on the scene: Jay Garrick. That is, Hunter Zolomon masquerading as Jay. He warns the group that their world is in danger from a new threat and brings news of Earth-2.

This was a master stroke of the CW. Bringing in Earth-2 opened the doors to the JSA, their friends and enemies and brought the Golden Age back to the fore. Much as the Justice League is one of the best superhero groups around, the Justice Society will always be the one that is more family than team. People might remember the partnerships between Barry and Hal or Wally and Kyle but it was Jay Garrick and Alan Scott who first came together. Sadly, the JSA seems to be going to Legends of Tomorrow but we can hope.

In DC Comics, there is supposedly 52 parallel and distinct worlds. Although it’s not very likely that CW will be showing off all of them, Earth-2 has been the centre of this season of The Flash and the real Jay Garrick claims to be from what he dubbed ‘Earth-3’. Irritatingly, the original Earth-3 was the backwards world with Earth-1 heroes playing the roles of the villains and vice-versa. Having the heroic Jay Garrick originating from a new Earth-3 undermines that philosophy. It’s possible that the CW will make another evil Earth to take it’s place. Maybe Earth-616?

With Jesse and Wally, we’ve been given all new backgrounds for the duo and grown to love them as the characters they are. Although DC Jesse began as the daughter of two heroes, CW Jesse is a child-genius rebelling against her father before being captured by Zoom. Then she struggled to adjust for life on another Earth and aided Team Flash. Thankfully, she’s been allowed to go back to her own world where we can watch her powers develop by herself.

Wally was a complete mystery at the beginning. Since before he was born, his father and sister had no idea that he existed. But after his mother tried to come back into their lives for her final days, we learn that he has been paying her bills by street racing. There have been so many that he resorted to breaking the law and selling the cars he won just to keep up. It might not make him the perfect hero, but having a bit of vigilante in the second Flash makes him that much more appealing. Nobody looks to Superman to make the hard choice. We just have to trust him to follow the law and let Batman step outside to find both the truth and the solution. Remember the No Man’s Land arc? Bruce gave his friend a day to do whatever he wished to help the city. After the time was up, Clark realised that he wasn’t the right man for the job. If Barry ever finds himself facing a moral dilemma, Wally will be there to step up to the bat.

As for Hunter Zolomon, I did have a slight grievance with him. DC Comics establishes him as the meta-human profiler for Central City. Following an accident, he begs Wally West to travel back and change the event that ruined his life. When Wally refuses, Hunter tries to do it alone and the resulting accident ‘knocks him off’ the timeline. Imagine that time passes at a rate of 1. Zolomon, after scratching out a few letters (Zoom) ends up able to alter how time flows around him, anywhere from 1 to 0. He’s not, strictly speaking, a speedster. Many of his powers are similar in effect but not cause. DC Hunter runs at relatively normal speeds but the passage of altered time means he effectively moves at several thousand miles to the hour. Despite the differences between the pair, CW Zoom is still a formidable and brilliant foe. Here’s to the new Black Flash. Kudos.

Rounding off at Jay Garrick, fake and fact, we cannot deny that CW hit the nail on the head. Over his course of heroics as Jay,  Hunter taught Barry some new tricks and helped him adjust to his new responsibilities as the Flash of two separate worlds. With the latest plot-twist of the Arrowverse revealing the real Jay Garrick to be an alternate of Barry’s father, we could potentially see a double-act similar to Arrow. Instead of a flashback/forward situation, we could see the antics on Earth-1 matched by those on Earth-2 with similar ripple effects. Jesse-Jay could be fighting Icicle as Barry and Wally hold their own against Chillblaine.

Season 2 has been an interesting run. We’ve seen Jay Garrick become Zoom only to uncover that it’s all a lie and that there is a real Jay Garrick waiting in the wings. The multiverse is open for business and that it may bring. Time travel has been clearly established and the Time Wraiths intorduced as a sort of protective entity for the Speed Force. Pied Piper has been brought over to the side of good and Tine McGee has been brought into the loop. Sadly, we’ve also been forced to mourn the loss of Henry Allen but fret not. With the climatic ending saving Nora Allen from the clutches of Eobard Thawne, Henry will never go to jail for her murder. Maybe he lives in the new timeline.