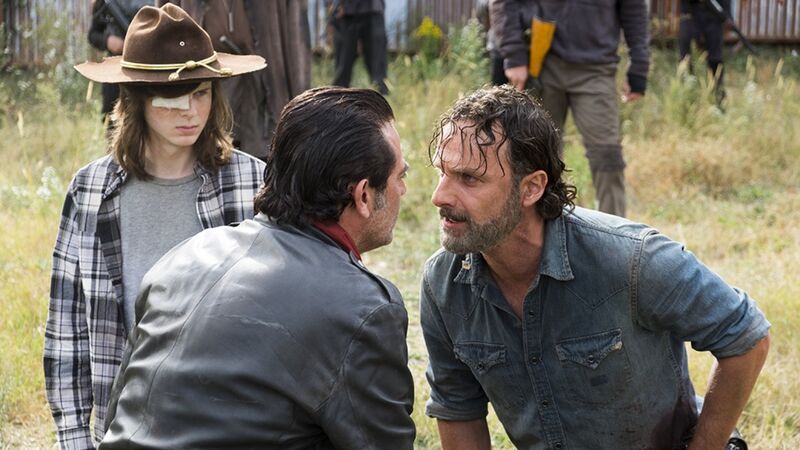 As The Walking Dead strides into its eighth season and the apocalypse continues apace, you might have noticed the series stretching the realms of possibility. Or at the very least, toying with our ability to suspend our disbelief. Here are five of the most maddeningly, gear-grindingly improbable aspects of The Walking Dead that are really screwing with our brains.

They’re Still Being Taken By Surprise By Zombies

This has been a point of discussion among fans for a long time. And yet it’s still happening. Time after time, season after season, survivors of the apocalypse continue to be taken off-guard by a seemingly stealthy walker. The problem with this is that ‘stealthy walker’ is kind of an oxymoron. Walkers aren’t capable of stealth. They’re driven by an instinct to feast on flesh, and they have nothing else about them. They don’t plan, they don’t think, they don’t strategise. They’re not fast, and they aren’t into surprising people. They also are far from quiet.

Most recently, a faintly ridiculous moment from Season 8 Episode 2 involved Savior chief, Mara, being caught unawares by a single walker in the midst of the siege. As Rick’s allies attack, she and her men are very definitely on the back foot. But when a walker comes ‘out of nowhere’ and chomps down on her neck, she puts up no fight. This tough, trained, clear-headed military-style leader. And that’s the end of her.

And yet, just one episode before, Father Gabriel is caught in a horde with seemingly no escape but manages to evade the hungry undead. By jumping from the frying pan into the fire (a surrounded cabin populated by Negan), but still.

On the subject of Negan, how is he not dead by now? In terms of wrapping up his story, he should quite frankly have met his fate at the end of Season 7. But that’s not what we’re taking issue with here.

Firstly, how has he not become a victim of a coup, or assassination attempt? So many of the Saviors have witnessed his dictatorial and cruel behaviour and yet they continue to stand by him, or follow his harsh brand of leadership in meek servitude. The show may have tried to explain it – he rules by fear, and there’s also been some discussion around the fact that in another show he’d be our hero and that he’s not too far removed from Rick. But we’re not buying any of that. How is it that Dwight is the only member of that gang that is in a position or even willing to start mounting a challenge?

And all the times he’s evaded certain death! Let’s list them. That time Rosita shot at him and the bullet bounced off Lucille, saving his life. That time he should have been eaten by Shiva. That time he should have been bitten by zombie Sasha emerging from the casket. That time in Season 8 Episode 1 when Rick had him cornered. And never mind the moment earlier in the episode when Rick and the rest of the assembled group had a clear shot at him as he stood at the top of a staircase. The episode had just spent an inordinate amount of time proving what great shots certain members of Team Rick are as they took out Saviors sniper-style.

Shiva Knows Exactly Who To Kill and Who Not To Kill

The thing about tigers is that they’re wild animals. Their instinct is to hunt. And even if they’re well fed and kept in captivity, you still wouldn’t get in an enclosure with it. We’re okay with the fact that Ezekiel has a special bond with the animal. He told an Androcles and the Lion type story about why they bonded.

But how the actual frack does Shiva not just attack others at will? She hasn’t even so much as growled at any of Rick’s group or his allies. And she seems perfectly able to take orders, to remain quiet when needed and jump in and eat Saviors as-and-when required. Perhaps whatever it is that turns humans into the mindless undead bestows animals with superior intelligence at the same time? It’s very far-fetched. And how has she not been killed yet? Pretty sure somebody would have targeted her to take out the threat.

This one’s a stretch. We’ve watched Carl grow up on the show. He’s developed from sweet little boy into awkward teen via moments where his understandably protective father has tried to clip his wings and he’s posed a challenge to Rick’s authority. He’s wanted to prove himself on numerous occasions, leading to some hot-headed moments that have landed him in very hot water.

Yep, he’s asked for trouble many times, but managed – miraculously – to evade harm (mostly). He’s put himself in serious situations with zombies, and recklessly confronted Negan on at least two heart-in-mouth occasions. Remember when he fired a gun as the Saviors were taking Alexandria’s medicine, and then refused to put the weapon down when Negan came to investigate? And the time he went off on a solo mission to the Sanctuary, and got captured by Negan but escaped again with his life (at Negan’s will)?

And let’s not forget how he survived that shot through the eyeball. The boy is a walking marvel.

By the time Season 7 drew to a close, you might have been wondering why on earth you couldn’t see even a slight bump protruding through Maggie’s flimsy T-shirt. In the Season 8 premiere, she’s still as flat as a pancake in the bump area. And yet we found out about her pregnancy mid-way through Season 6.

But if the events of Season 7 take place over 19 days, as co-executive producer Denise Huth has said, and the Season 8 premiere picks up just a few days later, how come baby Judith seems to have grown up so much? It’s a conundrum we’re still puzzling over.