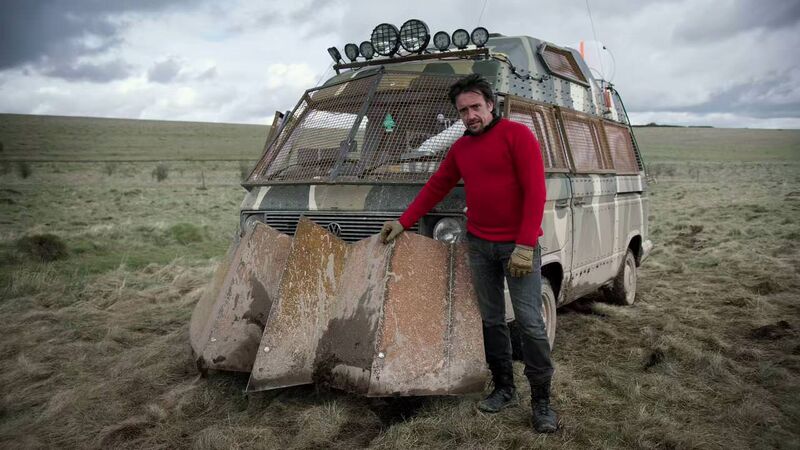 ‘The Grand Tour’ Recap and Reaction: “Berks To The Future”

With a deep love for cars, The Grand Tour has set camp in engineering perfect Germany. Considering how politically incorrect Clarkson has been in the past, we should be very worried. Actually, there does not seem much reason to. Besides making a few polite jokes about the German working mentality – apparently forever – and their very literal language – where iconic Jaws is called The White Shark – he is very well behaved.

Back in 1990, Honda produced the brilliant NSX. As with all things, it eventually went off sale in favour of newer and more advanced cars. But reboots are popular and they have a new one for James to try out. At £138,000, the 3.5 litres twin-turbo V6 engine has the additional backing of some electric motors for 573 horsepower. Although most cars usually brag a practically useless 0-60 time, Honda has apparently refused to dish the dirt, leaving Captain Slow in charge of finding out. At 3.2 seconds, it’s not as fast as other cars but these are the unofficial non-laboratory test – give some leeway.

Each motor is cooled by the aerodynamics of the car, at the same times as the air forces the NSX to the road. Despite rain and a soaked track, the NSX gets a respectable 1.26.00 on the first wet Grand Tour lap.

Socks-and-sandals adventurers want a nice little hatchback which does all the outdoorsy activities yet be cool and suave on the road. But it doesn’t exactly work that way. That is, unless The Grand Tour can change things. Using a peeled Land Rover and gutted MGB, Clarkson cackles something – probably along the lines of ‘it’s alive(!)’ – to create a V8 monstrosity – the MGD.

Eager to show off, the MGD is pitted against a Dacia Duster – an actual ‘sports utility’ vehicle. Despite all logical sense, the Dacia loses by a bonnet even as Clarkson discovers his brakes have broken. Then his engine takes a break during the off-road test. Next is the revolving chassis. Then the removable chassis. Going for an upgrade, Clarkson grabs a Mercedes SL and grafts it to the Land Rover to create ‘The Excellent’. Or ‘rubbish’ as the joining presenters call it.

Marrying voice over and filming in a wonderfully funny twist, Jeremy (in voice-over) keeps saying that the others are coming around to his invention just before they shoot down his lies. Determined to prove that sophisticated clients would buy his car, he tries showing it to Chelsea Football Club. Unfortunately, I’m not fluent in the various languages used by some of Clarkson’s test group but I suspect fiddling has been done to the subtitles. Hearing the English words ‘flipping horrific’ being subbed with ‘flipping amazing’ helps my theory somewhat. The French word ‘merde’ meaning s**t doesn’t hurt either.

Determined to raise some points for his attempt, ‘The Excellent’ is entered into a Coys auction, alongside vintage Ferrari’s and classic Rolls Royce. The only good (and repeated) point that comes up is ‘unusual’ with the starting bid of £450 and eventually going for £4000 – £10,000 less than it cost to make.

With a clear and well-built square for a background, I can’t think of any way that this week’s celebrity could be killed off. Well, guest star Nena is carried off by 99 Red Balloons. For those unaware, Nena wrote a song called ‘99 Balloons’. As a result, the conversation turns to renewable energy. James plans to attach revolving doors to generators to harness the human energy. Talking of harnesses, Hammond decides to use dogs to pull dynamos whilst Clarkson goes down the Victorian route of using children instead. All three suffer drawbacks – in the middle of the day, nobody uses James’ door – forcing him to set off the fire alarm – Hammond is constantly feeding his dog and having used children as power sources whilst filming them. As a result of using children for power sources, the police cart away Clarkson.

Learning from their various mistakes, The Grand Tour go to London and hijack a gym to power a GWiz. After only eight hours of farming human fatigue, there is enough charge for him to travel twenty miles and the project is scrapped.

All the gloom and doom enthusiasts will love The Grand Tour’s latest idea – designing the perfect ‘bug-out’ car for the apocalypse. Sticking to his roots – see the poorly executed attempt at amphibious vehicles – Hammond has modified a VW Camper. To the front is a spiked battering ram to destroy roadblocks and zombies with a powerful bank of lights to ensure good aim. Cunningly hidden in the innards of the roof is a series of weapons and the entire van has been camouflaged and armour plated and inside has been converted to a veritable miracle of science where urine is recycled into drinking water, air scrubbed of all contaminants and a living chicken will provide eggs and eventual soup. Putting holes in the plan – and his soup – are the other two.

After Clarkson scares him away with machine gunfire, May uses an RPG to destroy the first attempt. Not to be deterred, Hammond develops a second version with improved armour to protect it from further harm. Undaunted by this development, May secures a Scimitar reconnaissance tank to paint the target with a laser then Clarkson destroys it with a Challenger 2 tank. Determined to prove his point, Hammond tries one last time, starting this time with an Alvis Stalwart. Taking overreactions to the extreme, May and Clarkson secure a battleship before using a missile to end the film. In a touching ceremony, they reveal the final remains of Hammond to the studio – identified by the suspiciously white teeth.