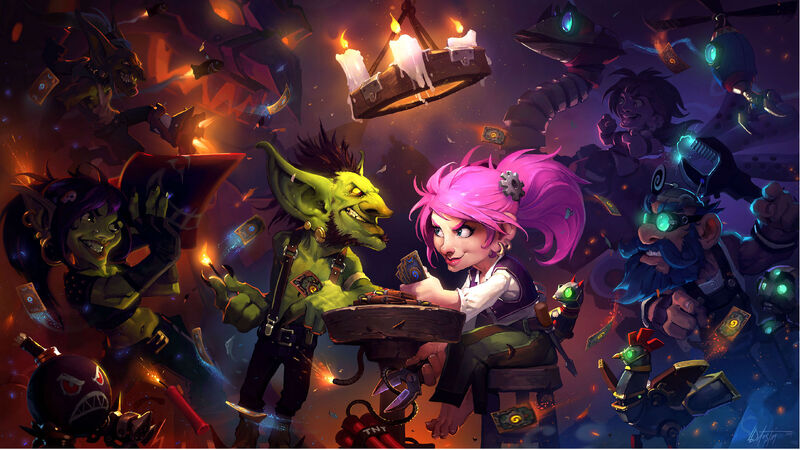 ‘Hearthstone’: How Blizzard’s Smallest Team Made One of its Biggest Successes

For many years, Blizzard earned itself a reputation for being a company that didn’t like taking risks. With its all-conquering World Of Warcraft seeping its way into into almost every facet of pop culture from 2004 onwards, the developer then seemingly decided to rest on its laurels.

Doubling down on its trusty trio of Warcraft, Diablo and Starcraft, the studio spent almost a decade churning out solid sequels to the same franchises. While each new entry was still perfectly well received, slowly, this once pioneering company had become the one thing no creator wants to be: predictable.

Luckily for fans though, World Of Warcraft’s once flourishing money tree slowly began to wither. With stiff free-to-play competition rearing its ugly head and many gamers no longer wanting to pay WOW’s hefty subscription fee, Blizzard needed another hit, and it needed it fast.

“The initial concept for Hearthstone was less about a game and more about a team,” reveals Hearthstone’s Art Director, Ben Thompson.

“Up until the formation of the [Hearthstone] team, while working on other games we always experienced moments of  ‘gosh, you know what would be a cool game?’ [But] when talking about [our idea] we’d realize that we didn’t really have the resources [or] the manpower to make them.”

The high-ups at Blizzard decided to change this. Instead of creating another of its typically massive studios, the company decided to put together an experimental team of 15, tasking them with creating concepts for bold new game ideas.

“The team was built as a generalist, very small, very reactive team that could tackle these new ideas as they came through and really start to figure out what it would take to get a game out in a very small amount of time,” Thompson says.


“As it turns out, the very first game we tried this team out on was… a digital card game. Immediately, it felt like this could be something really awesome, and we started adding more people to the team.”

Despite the team being incredibly excited about their vision for a digital card game, however, not everyone at Blizzard was convinced. “Internally there were those who felt ‘ Ah, I dunno, a card game?'” says Thompson.

Thankfully, they had a few powerful friends on their side.

“We’ve got pictures of (Blizzard co founder and President) Mike Morhaime And (other co founder Frank Pearce) huddled up on the carpet plying card games together and really enjoying that social time at 2 or 3 am while working on other games!” Thompson says with a cheeky smile.

With the enthusiastic approval of the company’s head honchos, it seemed like the right thing to do. “ It turns out that [Card games] are very much in our blood at Blizzard.. in our DNA as gamers.”

But what should the theme of this card game be? For the team, this new IP’s setting was a no brainer.

“World of Warcraft was chosen because there are so many different stories to tell in Azeroth and so many different ways to tell them,” says Thompson. “ There’s the epic and the serious, the charming and the whimsical and everything in between.”

Once they were given the go-ahead, Thompson quickly assumed the role of Art Director on Hearthstone. Now that they been given the green light, they just had the small matter of figuring out how to make a card game work digitally.

“We understood that as games go, collectible card games have a tendency to be very overwhelming,” he says. “They have a lot of sub rule sets to them… lots of numbers… they’re really the hardest games to get into arguably, even for gamers.

“So we figured if we’re going to make a digital version of a card game, is there a way we can take care of a lot of the numbers behind the scenes?”

Opting to make Hearthstone a highly visual-orientated experience, the team decided to put the game’s focus on flair rather than figures and statistics. With the team designing beautifully animated attacks and keeping the visible numbers to a minimum, they quickly realised they’d created a new breed of accessible and addictive card game.

Unsurprisingly, in the wake of Hearthstone’s massive success blizzard’s other game ideas quickly fell to the wayside.

“In a funny way the team has been both a failure and a wild success as well!” Thompson says. “This small agile team went from 15 to 80 plus and now as a result we’re now doing our tenth expansion for the game. It’s been an awesome ride…and we’ve been very humbled by the response to the game.”

“I think that Hearthstone has been so successful because of the passion of the team that was involved at the time and because of what that team has gone on to become,” he adds. “At this point in time I know Blizzard and [ourselves] have been very happy to see how that’s all scoped out.”

So, does this mean that the Hearthstone team might be allowed to bring other exciting new game concepts to life?

“Going forward… it’s hard to say. I think what the response has garnered in terms of this team and other teams…” Thompson exchanges a quick glance with Blizzard’s PR, suggesting that he shouldn’t give too much away about other teams.

“I know that this team has got its hands full when it comes to Hearthstone” he continues,  “and everything it’s going to take to continue to make this as compelling an experience as it has been. But I certainly think that the people we have surrounded ourselves with are up to the challenge and I look forward to working with each and every one of them on future sets to come”