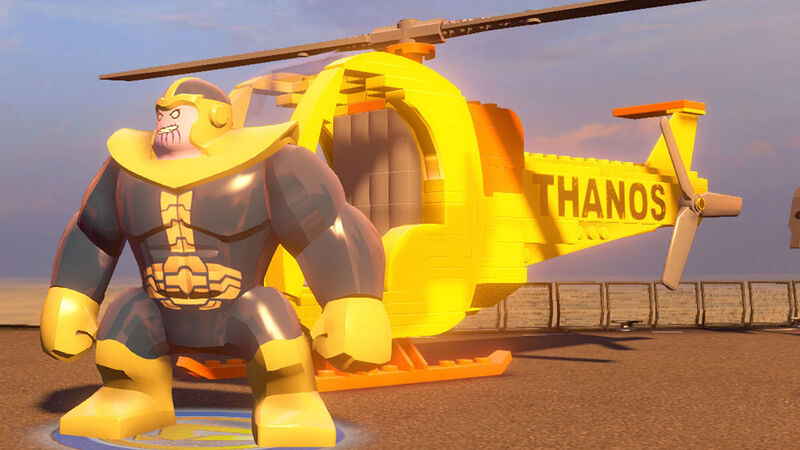 How the Thanoscopter Could be Deployed in ‘Avengers 4’

Any self-respecting comic-book character needs a sweet ride to get from A-Z. The Avengers have the Quinjet. Wonder Woman has her Invisible Jet. And of course, Thanos, the Mad Titan, owner of the Infinity Gauntlet, scourge of the universe, has the Thanoscopter. Wait, what?

Ah yes, the Thanoscopter. Don’t worry, you didn’t miss a post-credits scene at the end of Avengers: Infinity War, because as yet, the Thanoscopter still has not made its official debut in the Marvel Cinematic Universe. However, it is officially part of Marvel comic-book lore, so technically — technically — there is still a chance that we might see it in next year’s untitled Avengers sequel.

Picture the scene. Humanity lays in ruin. The Avengers are defeated, depleted, literally scattered like dust in the wind. What remains of Earth’s population cowers in fear at the thought of the Mad Titan coming back to finish the job. And then, he returns: a hellish space portal opens in the scorched grey sky, signalling his arrival. The world’s eyes watch through tears, as the portal closes in a bloom of blackened smoke and lightning, leaving behind only the terrifying sight of the mighty Thanos, flying a small-to-medium-sized yellow helicopter with his own name printed in capitals on the side. Ooh, chills.

Okay, so it’s not the most badass form of transport befitting a supervillain. In fact, the only way Thanos could be more of a laughing stock would be if he rocked up driving Del Boy’s three-wheeler from Only Fools and Horses (complete with sticker: “New York, Paris, Peckham”). He’d have more credibility if he travelled everywhere via Uber. Regardless, the fact remains: the Thanoscopter is legit. Did you not read the bit about how it has his name printed on the side? Do YOU own a helicopter with your own name on it? No? Then call me when you do. So what, Tony Stark can have his name on the side of his skyscraper, but Thanos can’t self-brand his own chopper? Double standards, guys!

Mark my words, all the superheroes will be self-branding their own merch soon enough. Iron Man steps out with “IRON MAN” written FUBU-style up the leg of his new suit. Thor’s new hammer leaves an imprint of his logo on the foreheads of the enemies he thwacks. Officially authorised Spider-Man pyjamas, now available in Target. You gotta have a brand, baby!

The Thanoscopter made its first appearance in Issue #39 of Spidey Super Stories, a comic-book run made for young kids in the mid-70s. In the story ‘The Cat and the Cosmic Cube,’ Thanos tries to steal the Space Stone from a superhero called ‘The Cat’, and when she drops it (!), Thanos tries — and fails — to steal it from a young child. Crucially, Thanos gets around in his Thanoscopter; a canary yellow single-rotor bubble helicopter that, for marketing reasons, has “THANOS” printed on the tail. The comic ends when Thanos drops the Cosmic Cube (!) and is led away in handcuffs by the police. We never see what happens to the Thanoscopter but it’s a good bet it was impounded, sold off in a police auction, spray-painted and modified extensively for agricultural work and/or cropdusting.

The Thanoscopter has become something of a Marvel in-joke over the years. Deadpool‘s 250th issue had a section devoted to Thanos, including a scene where the deadly villain takes to the skies in the Thanoscopter (“Deadpool, over here! It’s me, Thanos!”). The 2016 video game LEGO Marvel’s Avengers also featured the Thanoscopter as a selectable vehicle, while Mattel created a die-cast Thanoscopter Hot Wheels model exclusively for this year’s San Diego Comic-Con. And, as with almost every aspect of comic-book lore, there is extensive fan-fiction relating to the Thanoscopter online, because the internet wouldn’t be the internet without it.

The author of Spidey’s Super Stories, Jim Salicrup, hereby known in perpetuity as the creator of the Thanoscopter, recently shed some light on the chopper’s origins in an interview. “Let’s just say I needed a simple way for [Thanos] to get around, and I’m a big fan of the Adam West/Burt Ward Batman movie, which featured the cinematic debut of the Bat-Boat and the Bat-Copter.” If you’ve not seen the 1966 Batman movie, the Bat-Copter is the same Bell 47 model as the Thanoscopter — albeit sans the word “BATMAN” printed in large type on the side.

So, mock it all you like – and really, how could you not? — but given its popularity, don’t be surprised if you see Josh Brolin piloting a big shiny CG Thanoscopter in next year’s Avengers finale. Maybe that’s how he plans to kill off the other half of humanity — by making them die laughing.