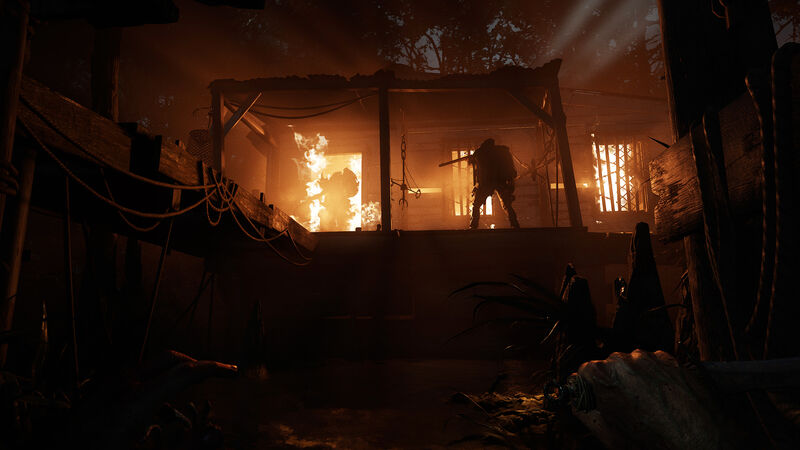 There’s something about the Depression-era vagrant that is extremely appealing to me. Obviously I don’t want to live in box cars scraping by on whatever vittles I can find, but thematically there’s a lot to draw on.

Where The Water Tastes Like Wine tapped into this successfully, weaving magic realism through a late 19th/early 20th Century America, and so too does Hunt Showdown — although that is the only thing Crytek’s new horror coopetitive (that is, competitive cooperation) game shares with Dim Bulb Games’ story focused adventure.

As a duo you enter Hunt Showdown, tasked with hunting a bounty and reaping the rewards thereafter. The bounty in question is a large, powerful monster of formidable magical strength, and you’ll need all of your wits, constitution, and ammunition to take it down.

The good news is that if you successfully kill the monster and get proof of your deed in the form of a bounty, you’ll walk away with a king’s ransom and probably a few new skills to boot. The bad news is that there are eight other bounty hunters vying for the same thing, and if they shoot you dead, they’ll take the proof and the rewards.

Oh, and if you’re killed, that character is dead forever, and all the stuff they had is gone with them.

To fire your gun you need to press RMB to ready it, and then LMB to fire it. You need to do the same when using medkits and grenades, turning basic acts in other games into procedures.

It creates skill differentiation through mechanical experience, lengthening the basic process of combat to force players to pick their moments instead of taking wild potshots and hoping for the best.

This makes every gunshot feel like a meaty decision — but that’s compounded by the fact that the entire map is littered with horrifying creatures that were at one point humans. Not-quite-zombies (but not not zombies either) shuffle around in turn of the Century farmers’ clothing, stricken by some sort of wasting disease.

Menacing packs of dogs roam the world, growling every so often to remind you they’re around. Bigger creatures lurk too, some of them as scary as the bounty monster itself. And then of course there’s the bounty, which is terrifying, but mercifully bound to just one spot.

A basic round involves searching the map using your magic eye to find clues. Each clue you find will eliminate more of the map for you, until after three there is just one place left — the monster’s hive. Therein you’ll find a beast — a monstrous skittering spider, or a hulking brute of a Butcher — and you’ll do your best to kill him, and quick.

Having killed the beast, you acquire the bounty — a lengthy process itself — before reaching one of the few escape areas scattered around the outskirts of the map (learn about the different map areas here). While you’re carrying the bounty, others can use the magic eye to find you — and they’ll continue to track you.

The many nasty things in the game world can still kill you too. Getting the bounty is only half the battle, really.

A Bounty On Your Head

Hunt Showdown is predicated on the complication of simplistic elements of gameplay, and through this complication it elevates the basic act of competition into something wonderful. It borrows heavily from the DayZ art of tension — the idea that knowledge is a gift and a burden — the more you know about the game, the scarier it becomes.

Add the natural tension to the foreboding atmosphere created in-game itself, and Hunt Showdown makes for some of the scariest — and most creative — moments in any game ever.

To create tension, the player needs to be under threat. Other players create a significant threat in that regard, and so too does the idea of permadeath for those who level up their character quite a bit.

The problem for Hunt Showdown is that balancing this threat against the rewards themselves is extremely difficult, and as it is right now it leads to a lot of dullness.

It’s a question of risk management, really. The hunters who acquire the bounty put forward the greatest risk in the game. They take damage from the bounty monster, they use up their ammo and they offer themselves up as a known entity to the environment — they are a fixed element in the game.

Once you have killed the monster and acquired the bounty, your position is known, and you need to get out alive.

Other players accept comparatively zero risk. While you’re frantically fighting the bounty monster, they’re able to set up an ambush at their own leisure. They need to watch for other hunters, certainly. But it’s not a great concern.

What this means is most players will find the clues and the bounty, and then wait. Games drag out as players search for one another, gunshots form punctuation at the end of some hunter’s sentences, and then the waiting begins again.

The person who ‘wins’ the map will usually be the one who waited the longest, or who luckily managed to avoid all combat long enough to clean up those who weren’t as lucky.

It’s a balancing challenge, but one I genuinely hope they solve. Perhaps a player countdown, like in PUBG — or if that’s too 4th wall breaking, maybe a ‘heartbeat’ style indicator could pulse when the magic eye is being used to indicate whether players are still alive and in the game world.

Or better yet, put a time limit on games — and once the timer is up, the world-based monsters go berserk and start hunting you.

The thing about Hunt Showdown is that when it plays well, it’s compelling enough to make you want to see them solve this one little issue. When you’re in a game where the other eight players are gung-ho and trigger-happy, it’s tense and exciting and scary and action-packed, and you get what they’re going for.

But if you play the game competitively, like you’re trying to win, it can get bogged down in risk mitigation techniques that are, frankly, dull. It’s available in Early Access on Steam right now, and we expect many more updates to come.

Joab Gilroy
Joaby
Joab is a games critic from Australia with over 10 years of experience and a PUBG tragic.