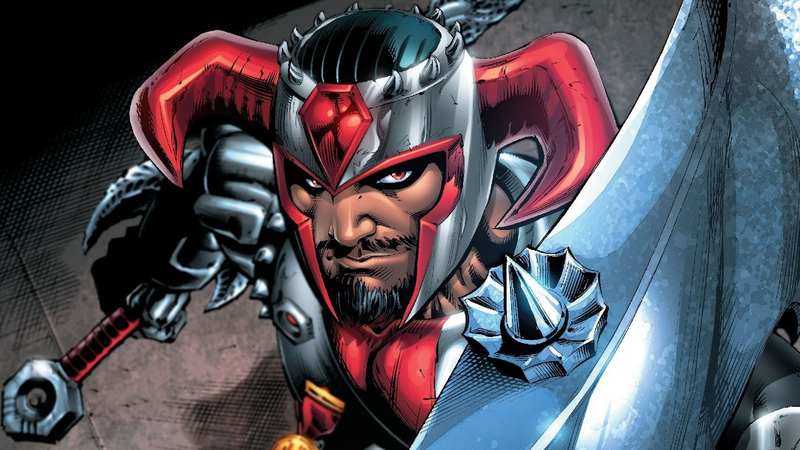 First Look at ‘Justice League’ Villain – But Who Is Steppenwolf?

The DC Extended Universe of films officially got rolling with last year’s Batman V. Superman and will keep growing with June’s Wonder Woman. But the main event in 2017 is November’s Justice League. The film brings together Wonder Woman, Cyborg, Batman, Aquaman, and The Flash into a world-saving crew. The real question is just who they’re fighting? That would be a lesser-known DC villain by the name of Steppenwolf, and we got our first real look at him now… in LEGO form seen on Twitter.

I was right the #Batmobile can travel inside the FlyingFox AWSOME reveal from new #Lego upcoming for #JusticeLeague #unitetheleague pic.twitter.com/ib9A66l2vI

Yes, that’s the lovely LEGO set being sold for the Justice League film and includes all the heroes, the Batmobile and Steppenwolf. He looks like he towers over the rest of the team, with a fearsome axe and some substantial headgear. Here’s a closer look at him

Fans who’d been closely following the film likely knew Steppenwolf is the big bad in Justice League. Perhaps they even know that Steppenwolf is being played by Game of Thrones’ Ciarán Hinds. The REALLY dedicated maybe even watched the extended cut of Batman V Superman to see Steppenwolf commune with Lex Luthor via a Mother Box. (If you skipped that three-hour-plus version, here’s the clip.)

So just who is Steppenwolf? He’s not one of DC’s most famous villains, barely ever appearing in anything outside of the comics since his debut in 1972. Created by Jack Kirby, Steppenwolf is part of the dense New Gods mythology. He’s a top officer of the demonic forces of the planet Apokolips. He’s helped invade Earth many times and has often proved himself tough enough to challenge the entire Justice League by himself. Most recently in the comics, he fought the League in a battle that has some real similarities to what we saw in the Justice League trailers.

Unfortunately for Steppenwolf, this dangerous, murderous wielder of all types of weapons often gets overshadowed. And that will probably happen in the DCEU. Because, no matter how evil and tough you may be on Apokolips, no New God character can challenge Darkseid for pure villainy. Steppenwolf is often used as a henchman or right-hand man to Darkseid, the first wave in an attack by Apokolips.

And you can expect the same with the next installment in the Justice League films. If you need a Marvel comparison, think of Steppenwolf as Loki in The Avengers, and Darkseid as Thanos. Don’t be too surprised if we get a similar late film tease of Darkseid as well.