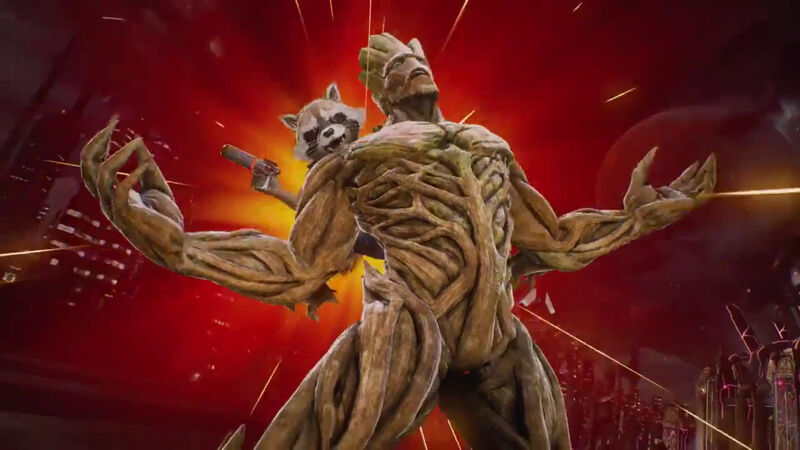 It’s been years since Ultimate Marvel Vs. Capcom 3 brought together the heroes of the Marvel Universe and the stars of Capcom games. Fans of both companies (and fighting games in general) should all be euphoric that a new successor has finally been revealed. In 2017, gamers will get to experience new over-the-top fun by battling the Marvel Vs. Capcom: Infinite roster all over PlayStation 4 and Xbox One.

But who exactly will you fight as? Only a small amount of the Marvel Vs. Capcom: Infinite roster has been shown so far, and we’ve got them all listed here. And stay tuned, because as more characters are revealed over time, we’ll be updating this article with each new Marvel Vs. Capcom: Infinite roster addition. The newest trailer just hit with info on the release date and many more heroes and fighters revealed. Watch the newest footage and then see who got confirmed below…

This intergalactic miscreant was an unknown when he appeared in Ultimate Marvel Vs. Capcom 3. Now he’s a billion dollar moive star, with Rocket even being voiced in the films by Bradley Cooper. No word on who is voicing him on the Marvel Vs. Capcom: Infinite roster, but it’s great just to see Rocket included in the game. His sense of humor is intact in the first trailer and hopefully he’ll bring his stockpile of giant guns along with him.

“Save some room for me!” – Rocket Raccoon who’s confirmed for #MVCI, obviously. #GotGVol2 #ShamelessPlug #MovieTieIn pic.twitter.com/bxklyq642G

Let’s start with the behemoth that’s impossible to ignore, the Incredible Hulk. Created by Stan Lee and Jack Kirby back in 1962, Hulk and his smashing have been an international sensation for decades. The scientist-turned-monster Dr. Bruce Banner has also appeared in multiple Capcom fighting games, so his inclusion here was in little doubt. Will Hulk’s most famous moves from past Marvel Vs. Capcom rosters be included? Let’s wait and see.

Chun-Li is the first lady of fighting games. The Chinese Interpol officer has graduated from chasing after Bison and Shadowloo to saving the universe and fighting robots in Marvel Vs. Capcom: Infinite. Though just on screen for a few seconds in her reveal trailer, Chun-Li had more than enough time to show off a couple of her most famous attacks.

The son of Odin and wielder of Mjolnir has more than a new film to be proud of this year. The Stan Lee and Jack Kirby creation will also be part of Marvel Vs. Capcom: Infinite, which is quite an accomplishment for Thor. When the first Marvel Vs. Capcom came out, Thor was little more than a cameo appearance in the game. Now he’s at the front of the roster.

Chris Redfield is a long way from Raccoon City. One of the core stars (or STARS) of the Resident Evil series, Chris seems a bit out of his element fighting Ultron in outer space. Then again, Redfield has killed his share of Godzilla-sized monsters and world conquerers, so maybe this special agent will shock us all by also taking down this killer robot army just like he does with zombies.

Don’t call him Green Arrow, because Clint Barton is a unique archer-turned-superhero. Hawkeye got his start as a carnival villain pestering Iron Man, but now has gone to a top member of the world famous Avengers, both in comics and films. The bowman doesn’t seem like much of a threat to Ultron in the reveal trailer, but maybe he’s got a secret Ultron Killer Arrow in his little backpack?

If there’s one Capcom character skilled at killing armies of robots, it’s Strider. The futuristic ninja has fought his fair share of challenging androids, both in his own series and in many fighting games. Strider is looking similar to how he did in his recent reboot, so does that mean that some of his new Metroidvania-esque combat will translate over?

This intergalactic miscreant was an unknown when he appeared in Ultimate Marvel Vs. Capcom 3. Now he’s a billion dollar movie star, with Rocket even being voiced in the films by Bradley Cooper. No word on who is voicing him on the Marvel Vs. Capcom: Infinite roster, but it’s great just to see Rocket included in the game. His sense of humor is intact in the first trailer and hopefully he’ll bring his stockpile of giant guns along with him. And Rocket isn’t the only Guardian of the Galaxy in the game. Take a look at Groot in what looks like Rocket’s ultimate attack.

Fans distressed by the lack of Mega Man in the last MVC will be happy to see this hero front and center. Mega Man X is the more aggro, futuristic hero of the franchise who first appeared on the SNES. In the years since this fierce version of the Blue Bomber has been celebrated as one of the best iterations of the mascot to date. While he hasn’t starred in a game in some time, perhaps his appearance in the Marvel Vs. Capcom: Infinite roster means new solo adventures are in his future.

When you think of classic fighting games, your mind probably first goes to Ryu from Street Fighter. The master of the Hadouken fireball, Ryu has appeared in so many games, both core Street Fighter tournaments and crossover games like Marvel Vs. Capcom: Infinite. Will this iteration of Ryu be as maxed out and powerful as he was in previous MVC titles? If he’s holding an Infinity Stone, then the answer is yes.

The mascot of the Darksiders series, at this point Morrigan has appeared in more crossovers than the series that originated her. The femme fatale is a master of martial arts and magic. She puts both skills to good use on the Marvel Vs. Capcom: Infinite roster, with no small amount of sex appeal. Hopefully this time Morrigan invited along some of her Darksiders pals because fighting game fanatics have been clamoring for them for some time.

The first Marvel character introduced for the Marvel Vs. Capcom: Infinite roster was, fittingly, Iron Man. Though he’s by no means the first Marvel hero, Tony Stark is arguably the most popular worldwide, and he was the first in the Marvel Cinematic Universe. The man covered in metal is as shiny and badass as ever in Marvel Vs. Capcom: Infinite, even pulling off some of his best moves from past MVC games.

The second Marvel hero shown isn’t as famous worldwide yet, but it’s only a matter of time. She went by many names, but Carol Danvers has been a hit as Captain Marvel for the past few years. Soon to be played by Oscar Winner Brie Larson, Captain Marvel is one of the strongest characters in the Marvel Universe, usually acting as both leader and powerhouse on teams like the Avengers and Alpha Flight. Her appearance on the Marvel Vs. Capcom: Infinite roster marks Captain Marvel’s fighting game debut, and it’s long overdue.

Like you didn’t expect the First Avenger to be on the Marvel Vs. Capcom: Infinite roster? Steve Rogers has been a Marvel hero since punching Hitler was first popular, and he hasn’t slowed down since. That goes double for Captain America‘s appearances in the Marvel Vs. Capcom games, where he’s been a fan favorite for years. Based on the first gameplay, it looks like he’ll be the same Cap we know and love, though how will he act when empowered by Infinity Stones?

Admittedly, this member of the Marvel Vs. Capcom: Infinite roster is more of a guess, but seriously, who else could that be teased at the end of the first trailer? The eyes, the shiny head, sitting on a spacey thrown? That’s got to be Ultron, the killer robot, and Avengers archenemy. Not only that but based on the setting and the cosmic title, I’m getting a feeling this is Ultron from the Annihilation: Conquest miniseries of the mid-’00s. Prove me wrong, Capcom! Though Ultron has a brand new friend…

If you haven’t played the Mega Man X series recently (or ever), you might be confused about Sigma. Like Ultron, he’s a killer/super brilliant AI that’s out to destroy all life. He’s got quite a partner in Ultron, and they’re even more powerful with the Infinity Stones backing them up. Can even the combined mights of Marvel and Capcom stop him?

Those are all the characters we know for now, but stay tuned as more fighters get confirmed on the way to its 2017 release!