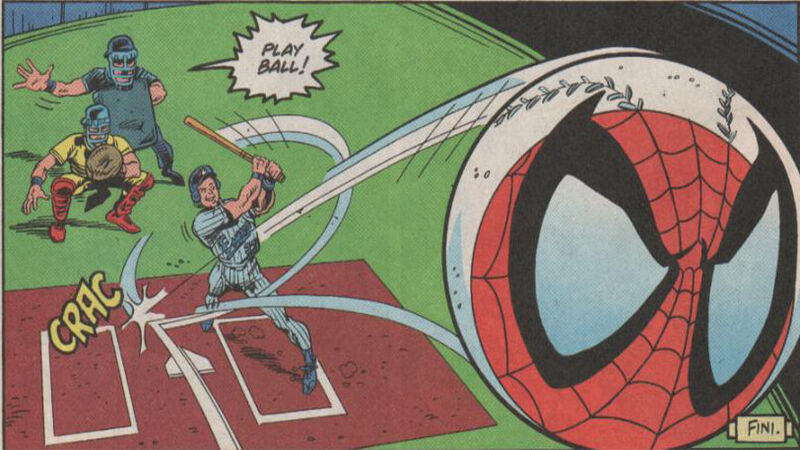 Spider-Man, baseball, more bicycle safety, the Green Goblin, inappropriate sexual content, and it’s all part of continuity! Welcome to the fifth edition of Meanwhile in Canada, where I share some uniquely Canadian entertainment to Fandom readers south of the border. Last time, I talked about a series of Spider-Man “say no to drugs” and bicycle safety comics that were published in Canada in the early 90s. So to catch up with everyone else, read the last four parts here and here and here and here. We’re on the home stretch now, this is the final issue of this mind-numbing series and it’s a whopper!

Before I start, I really really need to remind people that these Spider-Man stories are part of Earth-616 continuity. If you still don’t believe me, well this comic also tells readers that the events in this story precede the events of Spectacular Spider-Man #200. Spider-Man’s world changed a lot in the 20+ years since this story.

Harry Osborn is to be the Green Goblin in this story. At the time everyone thought his father, Norman Osborn was dead. Harry is killed off not long after in Spectacular Spider-Man #200. Both Norman and Harry are later brought back to life in the years after this story. Peter and Mary Jane Watson are currently married here as this was years before their marriage is annulled by devil divorce magic.

These are not the only things that haven’t withstood the tests of time either. This story also features the Montreal Expos, a Major League Baseball team that no longer exists. The Expos moved to Washington, D.C., and renamed the Washington Nationals in 2005.

… and we’re not talking baseball!

Boy, does this story get inappropriate right away. Stories aimed at kids tend to have humor that only adults get. This story is lacking in that subtle innuendo.

While in Montreal to cover the Right Riders (again) and a Montreal Expos game, Spider-Man returns to his hotel room to find that he is not alone. What appears to be a strange woman in his room turns out to be Mary Jane, who lets her house coat fly open when he comes into the room. This wouldn’t be so bad if she didn’t bring young Normie Osborne with her. Spider-Man and MJ then start making out while the kid sleeps on the couch! Sure they turn out the lights, but the implied activity is as subtle as a brick to the head.

The following day, Peter is taking pictures at the Expos stadium with the…. Pros de Velo? Since this story takes place in Quebec, the Right Riders are called by their French name. Pros du Velo translates to “Bicycle Pros”, which sounds way better than the direct translation Riders Droit. Riders Droit sounds like some sort of bicycle seat related injury.

Mary Jane shows up and immediately makes a comment about how great Peter’s butt looks in his pants. She says this in front of children.

If that isn’t enough, after she meets the Expos there’s a strange exchange between Mary Jane and Larry Walker, the Expos right fielder. After telling Peter that he’s a lucky man, he winks at Mary Jane and she makes a comment about him being “the best”. What’s going on? Why is this in a bicycle safety comic? Are… Are we witnessing a secret affair here? Why do I need a cold shower all of a sudden?

After all the “Action”, finally, there’s Action!

After all this awkward sexual tension the story cuts to Manhattan where we find Harry Osborn out shopping for his son’s birthday. If this comic can’t get any awkward about sex, Harry refers to his son’s birth as a “natal celebration.” Gross. When a retailer doesn’t have a copy of the “Guido Brothers” video game — really? — he begins to lose his temper. Then he sees a broadcast of the Expos game and, wouldn’t you know it, he happens to see Peter Parker catch a baseball for his son and completely loses it. After setting the store on fire (!!!) Harry vow to get revenge on Peter for “stealing” his son.

Back in Montreal, readers are “delighted” to more bicycle safety from the Right Ri– er I mean le Pros du Velo. Unfortunately, the Green Goblin interrupts all of that pulse-pounding bicycle safety excitement.

How can I explain the ensuing insanity?

Well, Peter and the Goblin shout their identities across a crowded sports arena. The Goblin makes a ton of bad baseball puns. While Peter is busy trying to hide Normie, the Expos fight the Green Goblin. They lose.

Then the Righ– PROS DU VELO — go racing in the middle of the baseball field to try and hide Normie.

Finally, Spider-Man arrives to fight the Goblin and it all ends with the Green Goblin flying right into an archway.  Despite the humiliating defeat, the Goblin manages to escape because Spider-Man runs out of web fluid. Then, probably because they reached the page count for this comic, all our characters enjoy a baseball game like nothing happened.

What Did We Learn?

This is the last of these Spider-Man in Canada comics and wow, talk about belaboring a point. Back when I started this series I pointed out that they started off trying to teach kids about the dangers of drugs and drifted into bicycle safety three issues in. I have no idea why they kept on focusing on bicycle safety, but it was three three issues too many for the subject. Between this and Paperboy for Nintendo, my younger self-decided that bicycles are far too much trouble.

I think the comic book taught me more about how to make wry sexual comments in mixed company than bicycle safety.

Next Time In Canada…..

I’m going to take a break from Meanwhile in Canada for some more conventional articles. After the break, Degrassi High: The worst school in the world? Or could it be ground zero of a death curse? Check back in for the next edition of Meanwhile in Canada to find out!