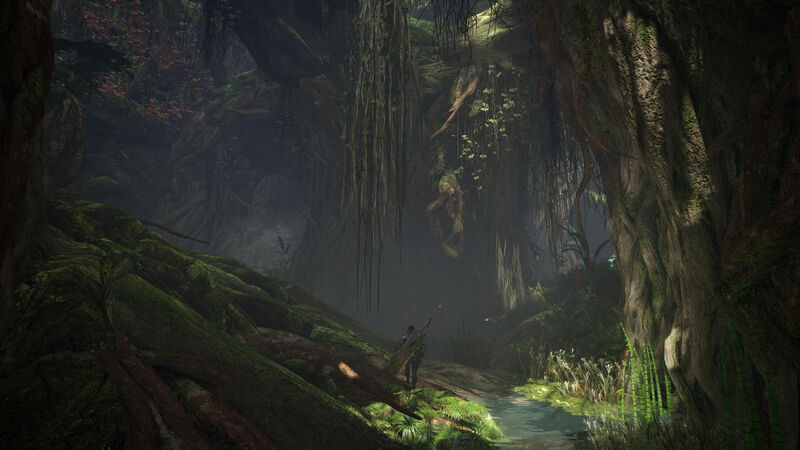 Monster Hunter World is one of those rare games where you feel completely immersed in your surroundings. With gargantuan dinosaurs roaming the earth and tiny cats following you into battle, creating a believable game world may seem like an odd mission statement for Capcom. Yet, after sitting down with the first ever PS4 Monster Hunter outing at Gamescom, it was all the little details that had us losing ourselves inside this medieval-esque Jurassic Park fantasy.

Spawning in a base camp beside a suspiciously chipper-looking woman, she soon revealed what prey we’d been ordered to take down. Before diving in to the hunt, however, it was time for us to prepare for the fight ahead. In previous Monster Hunter games, players had to equip their hunter in a hub world, leaving them stuck with whatever they’d chosen once they ventured out into the wild. In World, however, each camp now has a handy little tent that lets you swap out your gear on the fly. In another nice bit of streamlining, players can also  now cook up special stat boosting dishes at the campsite, rewarding them with a grin-inducing animation that sees your avatar and your feline companion chowing down on a massive meal.

This Is A Far More Accessible Monster Hunter

Even more surprisingly for the series, all of these crucial mechanics are clearly and immediately explained. Despite being massively popular in the East, Monster Hunter has never exactly been the most accessible of series. The long-running dino-slaying sim has a massive devout fanbase, and is an evergreen mega-seller in its home territory Japan. Yet, with these fans hungrily chomping at the bit for every slightly-tweaked new beast-slaying adventure, there’s been little need to try and preach to anyone but the Monster Hunter faithful.

This time, however, it looks like Capcom is determined to woo Western players. With everything equipped and ready to go, it was time to hunt down our first monster – a Great Jagras. Running into a wide open space, we found ourselves face to face with some content-looking herbivores. As they happily chowed down on the plants around them, we ran past a small army of ants, causing the tiny colony to hurridley scatter in our wake. Before the herd of brachiosaurus-like herbivores could finish their meal though, a troop of opportunistic little predators appear out of the bushes, attacking the unsuspecting herd.

It’s unexpected moments like this that make Monster Hunter’s world  the star of the show. With the whole game’s eco system seemingly paying attention to each other, wandering through Monster Hunter’s wild plains can be a genuinely unpredictable experience.

Unfortunately for those poor herbivores, though, we had bigger fish to fry. Ignoring the massacre unfolding beside us, we ran deeper into the forest, beginning our hunt for The Great Jagras. While challenging combat has always been the core of these games, in previous entries, simply finding your prey could often be a mission in itself. Thankfully though, this time around players have been given a bit of a helping hand.

In World, hunters have managed to train swarms of fireflies to help them track their prey. Functioning as a thematically consist objective marker, these glowing creatures actually earn experience as you discover new footprints and find other traces of your target. It’s a nice little system, with following trails of mucus and analyzing footprints really making you feel like you’re actually tracking a wild animal. Interestingly, these scout flies don’t actually keep the experience that they earn. With each monster you track behaving differently from even other creatures of the same breed, players have to level up their scout flies from scratch over again as they learn more about their specific quarry.

Thankfully, we soon stumble upon a particularly sticky trail of green mucus, leading us to our target. Looking like a giant and deadly toad, we waste no time in launching into a surprise attack. Brandishing a rather badass-looking Wyvern sword, we charge toward him, rolling just out of reach of the creature’s grotesque looking mouth. Seeing our chance, we land a flurry of devastating blows in quick succession. After cutting up our prey within an inch of his life, the gigantic toad desperately attempts to limp away to safety. Unfortunately for him, we’re not feeling particularly merciful.  Dashing forward we jump onto his back, stabbing him repeatedly until we bring the acid-spitting monstrosity down for good.

Combat Can Still Be An Intense Challenge

With our demo coming to a close, we quickly headed out on a second mission, tracking down a far more deadly prey. It looked like a giant T-Rex, and was much tougher. With our feline friend fighting by our side, we just managed to dodge the behemoth’s devastating tail swing before being knocked down by a sudden swipe of his claw.  Thankfully, warrior cats and scout flies aren’t the only creatures you can use to your advantage.

Spying some green wasps to our right, we were shown that the green orbs inside them contain a healing venom, quickly targeting them with our sling shot and bursting them to heal our wounds. It’s a neat touch, seeing Monster Hunter World swap out generic items with creatures in the game’s ecosystem, keeping up the immersion by using living, breathing  creatures to trigger status effects. Unfortunately for us though, we didn’t manage to avoid the beast’s second attack,  quickly meeting our demise.

With the franchise leaving its cosy handheld home for the first time in years, Monster Hunter World sees Capcom building the most ambitious entry in the series yet. After years of entries released on the modestly-powered 3DS, the added graphical grunt of Sony’s machine has transformed the series’ once limited landscapes into suitably sprawling and complex playgrounds. We’ve only played one area of the game so far, but if the rest of World’s environments can feel as impressively lived in as the one we just played, gamers will be in for one hell of a treat.