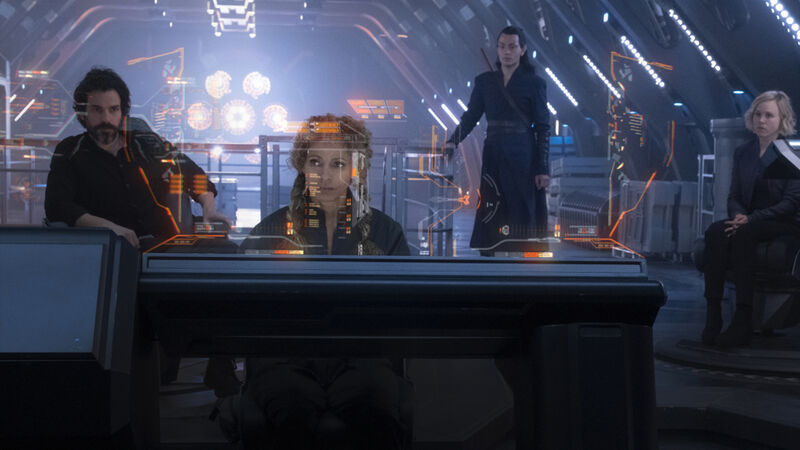 “The Impossible Box” is the culmination of all the preceding episodes. The anticipation of seeing Soji discover her true self and meet with Picard is finally realised but not without great costs on the part of almost everyone involved.

The first and most obvious cost is for Soji herself. Narek has continued to slowly guide her to discovering herself but it’s a tightrope act. He needs to discover the android home world but pushing too hard would cause her to activate, just like Dahj. This is why he’s been playing this deceptive game, delving into her dreams and gaining confidence. As Soji begins to realise her life doesn’t add up, Narek uses this doubt to take her on what appeared to be a Romulan dream journey. This causes her to reveal details of her home, finishing Narek’s mission and prompting him to end her life. Thanks to her superior android strength, Soji manages to get away just in time to bump into Picard whose great price is just being there on the cube.

Picard’s brief stint as a Borg makes his visit to the Romulan Reclamation Site one of great personal anguish. He has flashbacks to his torment and is even recognised by some of the former Borg. This includes Hugh and it was heartening to see the two meet on good terms after their interactions back in TNG. There’s a bond that former Borg share having been through the same thing, coming to similar understandings about humanity, so it’s not surprising that Hugh agrees to help Picard in getting to Soji. They meet up just in time, though are chased by Narek’s forces, and Hugh leads them to a transport device hidden in the former Borg Queen’s room.

Despite Picard’s orders not to board the cube, Elnor appears just in time to save the group. He stays behind with Hugh to fend off the onslaught of enemies rather than travel with Picard and Soji through the portal. This is a point that will probably cause contention among fans but, without this act from Elnor, it’s likely Picard and Soji would just be followed. It could also be that he and Hugh will be able to hide the chamber completely by staying behind, thus keeping Picard and Soji’s whereabouts unknown. If done well, this could even allow Hugh to keep helping the former Borg or at least escape on his own terms. Elnor’s character still feels like he has a lot to give, so hopefully we’ll see him reunite with the rest of the crew somehow.

Back on the ship Raffi remains broken. To get permission for Picard to get to the Borg Cube she had to essentially betray a friend in Starfleet. Picard applauded her performance at the time and she appeared sick at the thought of herself. Raffi had already lost her family in the previous episode and now, her friends. It seems she’s losing herself all for a man that she feels abandoned her and it’s taking a huge toll. We’re hopeful for even a glimpse of redemption for her, be it her theories come to pass or something more personal because she’s given enough and could really do with a win.

Lastly there’s Dr Agnus Jurati and Captain Rios. The pair seem to be forming a romantic, or at least, sexual relationship. For Agnus, it seems more like she’s trying to get past her murder of Dr Maddox and potentially is trying to get Rios on her side for whatever act she feels compelled to complete next. Rios, however, seems utterly clueless and also without motive beyond being a pilot for hire at this point. What does seem clear is while Agnus does have remorse about killing Maddox, she believes it was necessary. This puts Soji in great danger for when the crew do eventually meet back up with her and Picard at their destination.

This episode is a huge stepping off point for what’s to come. Finally, Soji and Picard are together but can she really trust him after Narek? Then there’s the matter of her home and what that could mean for other androids, especially now the Zhat Vash could find it. Lastly, it seems the crew is already falling apart. Will we see Elnor again? Can Raffi survive her personal traumas? Can Rios survive Agnus? And will Picard be ok after resurfacing his old Borg memories?