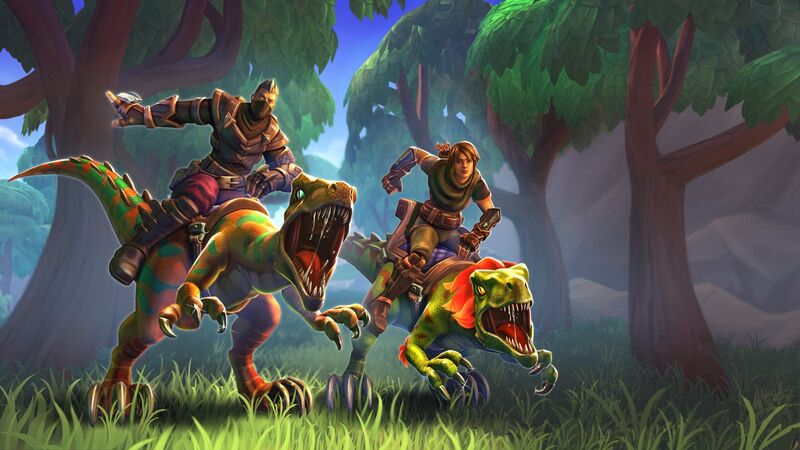 The Battle Royale genre has exploded. Understatement of the year. The phrase “Winner Winner Chicken Dinner” is no longer synonymous with ‘Depression-era alley craps’, but has transformed into an instantly recognizable victory cry heard across the world. Naturally then, when something pulls in this much attention, inspired clones appear. Whilst Fortnite is now the household name, it was PUBG’s success that led Epic to include a ‘Battle Royale’ mode in their previously base-defence focused zombie shooter, and the rest is history.

And yet, whilst they say imitation is the sincerest form of flattery, developers and publishers have already turned the cheek and bared their litigious teeth. PUBG Corp. has since dropped out of its case against Fortnite creators Epic Games, but not before claiming they were  “replicating the experience for which PUBG is known.”

Room for one more in this Royale?

The murky fog that currently casts over the ‘Big Two’ is thick, and whilst they compete against each other to keep the hype alive, developers outside of the bubble are looking to innovate in unexpected ways whilst capitalizing on the trend. Enter stage left, Realm Royale. Previously known as Paladins: Battlegrounds, the new and improved, SEO-friendly shooter is spun out of the successful free-to-play Overwatch clone Paladins: Champions Of The Realm.

Despite being a clone of a clone, spun off from a clone, Realm Royale does actually flip the switch on typical Battle Royale gameplay, painting RPG and survival elements onto the palatable canvas. With its cartoon adjacent art style and a wide variety of weapons, Realm Royale certainly has more Fortnite DNA than PUBG, but it still manages to distance itself from the competition with clever gameplay hooks that ask probing questions about what a Battle Royale game should be.

The key formula change is in the addition of a class system, which functions similarly to the one seen in Overwatch. Before the start of every game, instead of hitting the Shoot dance or throwing apples, players have to choose between five predefined loadouts: Warrior, Mage, Assassin, Hunter and Engineer. Each class comes with a special weapon affinity and a passive perk that grants ground speed or armour per second among others, but the real meat is found in the four abilities.

A new Class of multiplayer games

You can only map two of these abilities at a time, creating a tactical layer to your loadout. Trapped in the mid-game and feeling weak? Simply swap your skills and optimize your playstyle by opening loot chests. As a consequence of this, squads are forced to think about pre-game team composition in a manner very similar to Overwatch. Organizing your team of four demands communication in order to cover every base and focus on individual strengths.

A squad full of Warriors will be great for buffs with their designated Shielding and Healing Potions but may fall prey to a more diverse team that boasts the deployable turret of the Engineer and the covert positioning of an Assassin. Elsewhere, the Hunter is the perfect class for squads looking to set traps and snipe from the shadows. Her Proximity Mine and Flare skills allow players to notify their team of approaching attackers, whilst her Blast Shot can deal devastating damage if caught off-guard.

Perhaps the most diverse and interesting class is the Mage, a useful component of any team. Soaring in the air, Mages can rain hellfire from above with their Explosive Flask and Fireball skills. Yet, when you’re in the final moments of the match acting on the defensive, their skillset switches to that of ice queen Mei, and the Mage can freeze herself in ice to regain some health or put up a crucial wall between her team and the opposing force.

The dedicated movement skills in Realm Royale also offer a unique change of pace. Where PUBG and Fortnite are lacking in verticality and high-speed combat, Realm Royale has it in droves. Mages can soar into the air and Assassins can blink towards enemies in a fashion evocative of the powers found in the Dishonored franchise. Even the Hunter’s Dark Souls-esque roll is potent in the middle of combat when used correctly.

The fluid movement combined with the smaller than usual map creates an interesting new dynamic. First, air-to-ground from the plane is near instant and crossing the map is easy thanks to the addition of a mount for the player. This creates hectic gameplay where squads are consistently rolling on your position, regardless of where you are on the map. There are no designated ‘safety zones’ where you can be sure other players won’t arrive. This creates an intense atmosphere and forces you to be constantly vigilant.

The geography of Realm Royale is later made tactical by the addition of the Forge, small crafting spots dotted around the map where players can use shards they collect by deconstructing useless items to craft legendary armour, weapons and skills. King of the hill engagements become commonplace as you attempt to defend compounds to ensure your squad can cook up the scarce loot, which takes time to craft. This style of base defence play is clearly influenced by modes like Control within Overwatch but surprisingly, works seamlessly within the confines of the Battle Royale.

No harm no fowl

When you do eventually fall, the greatest twist is revealed. Players don’t die or stay put when they’re put down in Realm Royale, no. In fact, you’re turned into a chicken and must spend time clucking around the battlefield, dashing to safety. The model is far more adrenaline-pumping than crawling on your knees, meaning being downed isn’t as much of a ‘sitting duck’ situation as previously seen.

If you do manage to escape a squad of poultry hunters you will eventually be reborn from your woeful state and allowed to get back into the action. This makes the final moments of each game a rollercoaster ride of emotions. Where its usually clear-cut peeking in an enclosed forest or quickly-crafted buildings that set the final players apart, Realm Royale offers a more absurd crescendo.

Is Realm Royale worth my time?

Games can be turned on their head at the drop of a hat if a player is allowed the space to return to the land of the living. It’s easy to forget about the respawn counter too if you’re in the heat of battle with another foe, especially considering the fast-paced aggressive nature of the close combat. Whilst the game is certainly still scrappy and progressing steadily through early access, it stakes its claim in the genre with compelling changes that are sure to delight players who are feeling fatigued by the gameplay in PUBG and Fortnite.

Specifically, for PUBG players who find Fortnite’s building tiresome and are overwhelmed by the realistic grit of Pochinki, Realm Royale is refreshing, providing all of the features that make Fortnite fun with some bold ideas thrown into the mix.

In short, Realm Royale is mad, malleable and completely free. While it has been available on PC for awhile, console players can finally dip their toes in too, with a closed beta of the game available on PS4 and Xbox now. Even if it ends up only as a game you play as a break from your other Battle Royale titles, this quirky medieval royale brings a swathe of new ideas and a goofy, absurd soul to multiplayer gaming.