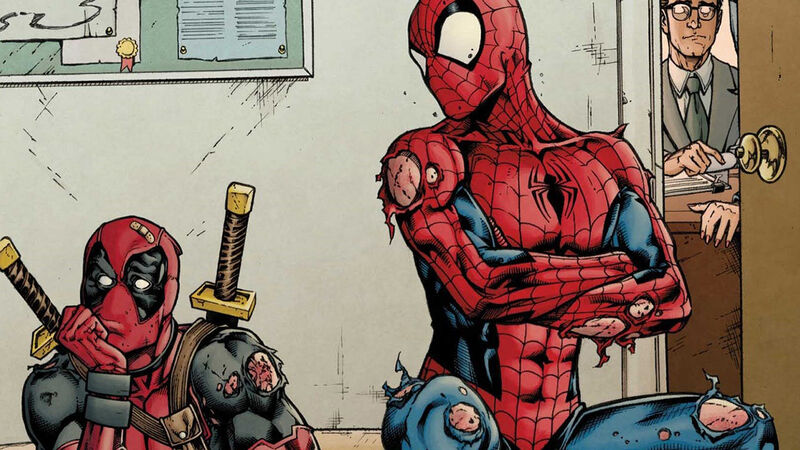 Spideypool and Six Other Surprising Ships

Shipping. For most people, this means transporting something from A-B. Or, if you’re British, a forecast telling you what the weather will be like at sea. But on the internet, it means something completely different.

If you don’t know, let us explain. Fans of popular movies and TV shows have come up with the concept of shipping: RELATION-shipping. Simply, it’s the creation and subsequent discussions of relationships between characters in movies, TV shows, comics… wherever there is interaction really.

But they’re not the actual relationships. Not many discussions take place over whether Leonard and Penny‘s relationship in The Big Bang Theory will last into old age. The apparent secret lust between Penny and Sheldon, however — that’s a different matter.

Some of the discussions can get quite dark, with invented incestual relationships providing juicy fodder for some fans. One such example being the secret love between the sisters in Frozen. Another, the unspoken attraction between Thor and his brother Loki. You can find those on your own. In this list, we’re looking at some of the others, most of which are ‘slash’ ships, or same-sex pairings. Why? Because, well, that’s what the fans want.

The long-running show featuring the super-brainy mega-nerds has a number of bona fide relationships, most of which could be described as annoying stereotypes.

However, it’s the apparent secret love between Sheldon and Penny that fans are more interested in. If ever there was a case of “opposites attract”, then this is it.

Fans seem to like the idea of Penny ditching Leonard for his ant-like best friend and see the two working together to improve each other. It hasn’t been suggested in the show, and while the two actors, Kayley Cuoco and James Parsons, have a great rapport on screen, it would be a bit of a weird twist if producers were actually to do this. The two really are poles apart.

Elementary, my dear Watson. But is there more to the crime-solving detectives? To be clear, we’re talking the doe-eyed moments Benedict Cumberbatch’s Sherlock Holmes and Martin Freeman’s Watson share in the BBC show. Not the non-existent sexual tension between former Sherlock/Watson actors Basil Rathbone/Nigel Bruce or Jeremy Brett/Edward Hardwicke. Or Robert Downey Jr/Jude Law for that matter.

Indeed, some fans seem to hope there is more than just a working relationship between the two. We can get behind that.

JUST PUT THIS ON MY GRAVE STONE pic.twitter.com/6BdJnDSqiO

Jack Sparrow and William Turner (Pirates of the Caribbean)

According to fans of the movie franchise based on a Disneyland ride, the best way to show true love is to constantly try to carve each other up with swords. Fans theorise that despite his apparent deep loathing for Sparrow, Turner actually really wants to become a special part of his pirate horde.

The fan-created hybridised name for this pairing is ‘Turrow’. But ‘Spurner’ could be more pertinent if Jack’s not interested.

Never mind Reylo (Rey and Kylo) and Stormpilot (Finn and Poe), it’s the pairing of Kylo Ren and General Hux that has fans hot under the collar.

What do we call this one? Rux? Armilo? The preferred nomenclature is Kylux, which sounds like some sort of mythical beast. We wonder what that would look like. Anyway, a segment of Star Wars fans thinks the rivalry between the ruthless First Order honcho and the Force-proficient destroyer of snowy forests is, in fact, down to sexual tension between the two.

It’s a coupling that’s been bubbling under since The Force Awakens but has gained huge traction since the two appeared together again in The Last Jedi.

Well, of course there are fan theories about this. In The Hobbit: The Battle of the Five Armies, Baggins would have been well within his rights to ditch Oakenshield and head back to the Shire after the Dwarf king gets Dragon Sickness and starts acting like a berk.

Throughout all the films, Oakenshield has little patience with Baggins. The hobbit not being a dwarf being the main irritation. Fair. But fans of Peter Jackson’s epic films see this as secret love.

‘Bagginshield’ (a rubbish 80s metal band?) actually happening seems a bit of a stretch as they clear loathe each other for most of the trilogy. But, although there are no more films forthcoming in which we might hold hope to see them get it on, there is a Lord of the Rings series in production. And if the rumours that it looks set to up the adult content to rival Game of Thrones are true, we could well see love scenes creeping in. Giving them ample opportunity — possibly in flashback, depending on the time period the show covers — to explore the thin line between love and hate that separates these two consenting adults.

You have to imagine, however badass Captain America aka Steve Rogers is, he’s constantly puzzled by the modern world. Rogers is essentially an old man in a young body, which can’t be easy to deal with. He also has to constantly deal with the egomania of Iron Man Tony Stark.

Fans think the bickering between the two hides a secret lust for one another. Which is arguably destined to remain forever concealed because of Cap’s ‘old-fashioned’ views on same-sex relationships.

This pairing is known as ‘Stony’. Descriptive perhaps of the dumbfounded silence that would befall ‘Stucky’ (Steve Rogers/Bucky Barnes) advocates should the ship ever find itself realised on screen.

‘Spideypool’ is the name given to the union between these two popular superheroes. It’s probably better than the alternative, ‘Deadman’. We’re not sure wrestling legend The Undertaker would be too happy at the nickname plagiarism.

Anyway, fans are convinced the duo are well into each other. In comic form, Peter Parker and Wade Wilson are very well acquainted. On screen, it’s a different matter. They’re yet to appear together in a live action format — but it’s inevitable it will happen someday.

Can you imagine the banter? Two of the best quippers among the entire superhero roster? They would flirt RELENTLESSLY. And if the two similarly costumed crimefighters ever fancied a life of endless bickering into old age, they couldn’t do better than settling for each other.

Of course, we’ve already had a taste of the heat this screen coupling could generate — when former Spiderman Andrew Garfield smooched current Deadpool Ryan Reynolds at the 2017 Golden Globes ceremony.