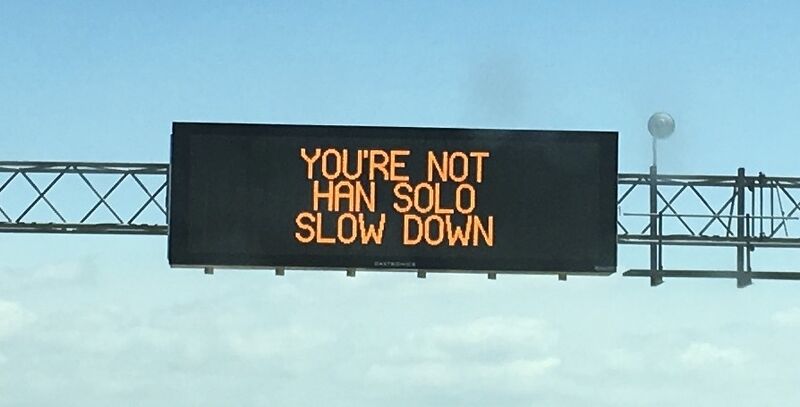 The Bumpiest Rides of the Skywalker Saga

Droids. Epic battles. Exotic new worlds. Lightsaber duels. Without certain things, it just isn’t a Star Wars movie. Right at the top of that list comes a pulse-pounding high-speed chase. You can take it as fact that if somebody with the last name of Skywalker or Solo climbs into a cockpit and revs up the throttle, they’re laser-focused and clear-headed as they prepare to fly. And as anyone who is familiar with the Jedi Order knows, one must maintain a sober clarity to ensure their safety, and that of others, when wielding both a lightsaber — or piloting a ship. Before The Rise of Skywalker drops December 20, let’s take a look at some of the Skywalker Saga’s bumpiest rides so far.

We’d heard all about Anakin Skywalker’s incredible piloting skills in A New Hope. Twenty-five years later, George Lucas brought them to the big screen with the first movie of the prequel trilogy, The Phantom Menace (Watch now on Disney+). The high-octane podracing sequence gave the nine-year-old Force Sensitive the opportunity to show off at Tatooine’s biggest sporting event, the Boonta Eve Classic. Despite Tusken Raiders laying in ambush, a twisting, turning nightmare of a race course, and the dirty tricks of his number one rival, Sebulba, young Anakin emerged victorious and unscathed — unlike his podracer, sadly.

After making a failed attempt on Senator Padme Amidala’s life, the face-changing Clawdite assassin Zam Wesell flees in a speeder. Assigned to protect the senator, Jedi Knights Obi-Wan Kenobi and Anakin Skywalker take off in hot pursuit in one of the high points from Attack of the Clones. The towering skyscrapers of Coruscant make for a spectacular backdrop as the two speeders swoop and soar, with the acrobatic Jedi spending as much time outside the speeders as they do piloting them. Wesell dies before giving up her secrets, but on the plus side, Obi-Wan encourages a death-stick dealer to go home and reconsider his life choices.

After duking it out with Count Dooku on board the Separatist dreadnought Invisible Hand, Obi-Wan Kenobi and Anakin Skywalker find themselves stuck on the bridge of the great starship with a bit of a dilemma on their hands: not only is it about to crash, but it’s also on fire. As if that wasn’t enough bad news, unbeknownst to the Jedi, the man standing next to them (Senator Palpatine) is about to turn Anakin to the Dark Side, overthrow the Republic, and declare himself Emperor of the entire galaxy. The only good news comes when Skywalker’s exceptional flying abilities save the day, proving the old saying that any landing you can walk away from really is a good one. (Watch now on Disney+)

Dazzling vehicle-handling skills aren’t limited to the Skywalker family: Han Solo knows a thing or two about maneuvering his way out of a bad scrape. While on the run from thugs in the employ of Lady Proxima, head of the crime syndicate known as the White Worms, Solo handles his Mobquet M-68 landspeeder like a pro…right up to the point where he flips it onto its side in order to try and squeeze through a spot that’s just a little too narrow. Fortunately, by the time Han finally takes ownership of his beloved Millennium Falcon in a game of Sabacc, he takes a little more care with his piloting.

This is it, the one that started it all. Nothing like A New Hope’s climactic battle scene had ever been seen before. This particular ride has so many iconic moments, it’s hard to list them all: the frantic zig-zagging of the Rebel X and Y-Wings as they struggle to avoid the defensive laser batteries and TIE Fighters; dogfights while skimming low across the surface of the Death Star; and the explosive last-minute reappearance of Han and Chewie in the Millennium Falcon, just in the nick of time, all add up to make this the ultimate thrill ride.

The Empire Strikes Back Asteroid Chase

If there’s one hotshot pilot with the guts to outrun an Imperial fleet and evade its TIE fighters by ducking into an asteroid field, it’s the smuggler Han Solo. Few others would be so brave…or possibly so foolish. Despite the near-suicidal odds of survival being 3,720 to 1 (never tell Han that), Han soon has the Falcon ducking and weaving between thousands of flying rocks, leaving a trail of smashed Imperial TIEs in his wake. Things are actually looking good until our heroes discover that the “cave” they have chosen as a hideout is actually a colossal space slug, and it takes more fancy flying to get away from the cosmic critter before it eats the Falcon for breakfast.

Zipping through the lush forests of Endor on Speeder Bikes, the Imperial Scout Troopers are given a run for their money when Luke and Leia decide to get in on the game. The chase sequence that follows looks all the more impressive because not a single frame of it was achieved with the aid of computer-generated imagery (CGI). The Steadicam operators walked slowly through the giant trees at California’s Redwood National Park, step by painstaking step. When the footage was speeded up by a factor of 30 in post-production, viewers felt as if they really were speeding through the trees of the forest moon. Luckily, Luke handles an X-Wing better than he does a Speeder Bike. (Watch now on Disney+)

Richard Estep
REstep2301
I’m the author of numerous books in the field of paranormal non-fiction, and write a regular column for Haunted Magazine. I appear on the TV shows ‘Haunted Case Files,’ ‘Haunted Hospitals,’ ‘Paranormal 911’ and ‘Paranormal Night Shift.’ I live in Colorado with my family.