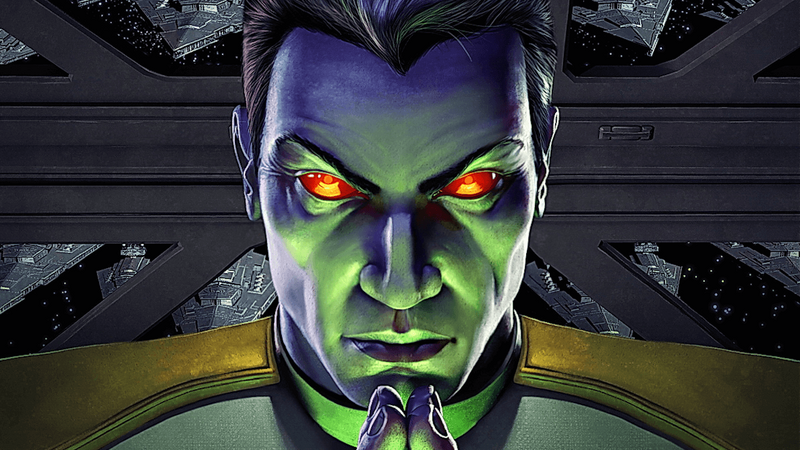 Ask any fan of Star Wars Legends (formerly the Expanded Universe) who the most popular Legends character is and most of them will say one name: Thrawn.

Grand Admiral Thrawn was first introduced in the 1991 novel Heir to the Empire by Timothy Zahn, and he acted as the primary villain of the novel and its two sequels: Dark Force Rising and The Last Command. The blue-skinned and red-eyed officer, from a race known as the Chiss, was a military genius who led the remnants of the Galactic Empire after the Battle of Endor. So great was his battle prowess that he was able to outmaneuver even Force users in naval engagements with his cunning tactics and strategies. His ability to defeat an enemy was largely based on his knowledge of that culture’s art and music, something he appreciated.

These characteristics fueled his popularity, as did another key fact: He was the first villain to feel like an epic threat to Luke Skywalker, Princess Leia, and Han Solo since the death of the Emperor in Star Wars: Return of the Jedi. The “Thrawn Trilogy,” as it came to be called, marked a huge step forward for the Expanded Universe.

Because his story was told in Star Wars Legends, Thrawn is no longer part of the official Star Wars canon. Nonetheless, his uniqueness and popularity as an Expanded Universe character are driving efforts to bring Thrawn into the canon through the animated television series Star Wars Rebels. This effort, #GetThrawnIn #StarWarsRebels, is driven by a small group of fans who are very well-read in Star Wars literature. This group is the Star Wars Actors Guild (SWAG 77), a group that was recognized by Lucasfilm at Star Wars Celebration VI in 2012 and Star Wars Celebration Anaheim in 2015.

The SWAG 77 owner and several others have a lot of experience in organizing campaigns, and she is translating this passion into the campaign to ask Lucasfilm to bring Thrawn into the canon. This effort was kicked off last year with a simple video, complete with voice work from prolific Star Wars voice actor Tom Kane, about who Thrawn is as a character. Check it out:

Although many fans would, of course, love to see Thrawn in the feature films, those of us in the campaign chose to focus our efforts on Star Wars Rebels. We felt that the award-winning production talent and animators could help bring Thrawn to life, through animation, in the minds of new Star Wars fans, possibly even encouraging those fans to read Legends novels to know the full legacy of this beloved character.

Think about how Thrawn could fit into the story too, and how his backstory works right into the adventures of the Ghost crew. Star Wars Rebels is, at its core, a story about rebels who have to find new ways to defeat the Empire, often through creative means. One of those characters, the Mandalorian warrior Sabine Wren, is even an artist. She uses her art for anti-Imperial propaganda and often sprays her own symbol, the starbird, onto Imperial targets that the rebels have attacked. Who do we know who also thinks creatively, and who knows how to use an enemy’s creativity against them? Thrawn! Someone with his experience and backstory could pose a bigger threat to the rebellion’s creative approach than past villains, who have tried and failed to defeat the rebels.

Of course, this is all speculation on our part, but we in SWAG 77 think it’s a good way to bring Thrawn into Star Wars Rebels and a smart approach for convincing Lucasfilm to consider him as a villain. Plus, for a series whose primary audience skews young, a little bit of art, culture, and creative-thinking are good traits to show, right? Especially if Thrawn’s presence makes the heroes think even more creatively to succeed.

There’s also a theory suggesting that Thrawn has already appeared in the canon. In the novel Star Wars: Aftermath by Chuck Wendig, a fan-favorite recurring character named Admiral Rae Sloane is part of an emergency Imperial summit on Akiva, where the remnants of the shattered Empire come together to figure out what to do now that the New Republic has come to power. The summit devolves into conflict, but that was all according to the plan of a mysterious fleet admiral that Admiral Sloane works for. This unnamed and shadowy figure is shown to have an appreciation for art and music, much like Grand Admiral Thrawn. Could it be him? Time will tell.

Until we know for sure, the #GetThrawnIn #StarWarsRebels campaign continues to focus on the benefits of bringing Thrawn into the canon and highlighting how cool it would be to have a character who appreciates art, music, and culture. As fans, we can sign petitions, participate in activities, and share the knowledge of art, music, and the books in the hopes of seeing more great stories about Grand Admiral Thrawn.