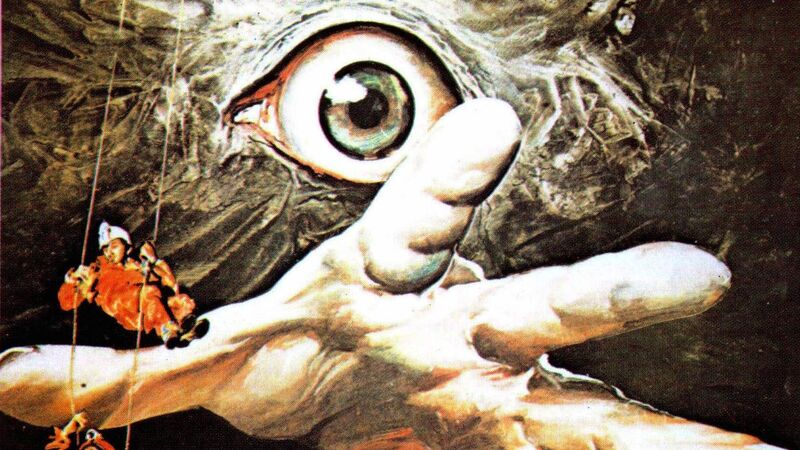 WARNING!!! Alien 2: On Earth features scenes of extreme violence that will be shown in this article. Reader discretion is advised.

Alien changed cinema forever. Its immense success meant a sequel was a no-brainer. But, Aliens wouldn’t hit theater screens for another seven years. Filmmakers couldn’t wait that long to capitalize on the film’s success. In the wake of Alien, dozens of ripoff films were spawned and cranked out as quickly as possible. Of all these films, only one had the chutzpah to bill itself as an actual sequel to Ridley Scott’s masterpiece.

A little context: the Italian film market was infamous for creating unofficial sequels to popular American films. This was particularly rampant in the horror genre. Since US movies would often be retitled for their Italian release, the Italian ripoff sequels would follow the renamed titles. For example, Dawn of the Dead was released as Zombi in Italy. So, Italian filmmaker Lucio Fulci made Zombi 2 (which was labeled Zombie here in the US. I know, stay with me). Zombi 2 did the bare minimum in trying to connect with the movie it was riffing on. The same can be said for Alien 2: On Earth.

Italian writer/director Ciro Ippolito – under the alias Sam Cromwell – churned out a script for an alien invasion movie as quickly as possible. The film starts with tons of stock footage of astronauts returning from a space mission. Meanwhile, a group of friends is planning to go on a spelunking adventure into some caves. Though it’s never shown, the astronauts apparently have disappeared and left a bunch of alien eggs lying around in the desert. Our cave friends find one and take along because… um, plot!

The movie is pretty aimless for a majority of its running time. But, the Italians always knew what audiences wanted to see out of these films: blood, blood, and more blood. The first victim of the alien eggs is actually a little girl on a beach. Her mother hears her crying, walks up to her, turns her around and sees…

Yikes! That’s quite a way to start your movie! Unfortunately, the majority of the film’s running time is spent following around our cave friends and lots of nothing happening. It’s hard to even discern one character from another. Their names aren’t given good introductions and they are paper thin to begin with. But, once they get down in those caves – which is a great location – we keep our fingers crossed for some sweet alien action.

You can probably see the connection to Alien at least aesthetically. A group of people explore a cavernous interior where some nasty alien eggs lie in wait for them. Alien 2: On Earth bills itself as a sequel – is that returning shuttle from the beginning implied to be the Nostromo? – but it’s much more of a bargain bin remake. Sadly, the titular alien doesn’t have nearly as good of a design as H.R. Giger‘s monster. It’s mostly a mass of tentacles that protrude from the rocks and smack people around until they die.

But, Ippolito knew he had to ripoff the most iconic scene from Alien: the chestburster. But, since the Italians always like to kick the nastiness up a notch, they decided to go with an even more gruesome scene. This ain’t for the faint of heart. Turn back now if you don’t have the stomach for over-the-top gore effects. Okay, without further ado, let me introduce you to…

What a scene! This is easily the highlight of the film for how off-the-wall nasty it is. Granted, we never get a truly good look at the alien itself. That’s mostly because it was never finalized as a design. But this scene almost makes the slog of the movie worth it. However, the rest of the film falls apart after this (admittedly awesome) scene. The characters run around in the caves, get attacked by tentacles and die off. The only survivor is Thelma, the lead female character who also has psychic abilities.

Yup! They just drop that little tidbit early in the film and it’s nonchalantly accepted by everyone. She can somehow sense when her friends are being attacked. It’s also implied that she can possibly communicate with the alien. Nothing comes of that and her powers make no difference on the plot at all.

By the end, she escapes from the cave and finds all of civilization has disappeared. She visits a bowling alley and runs into another version of the alien. We only see it from it’s… uh, it’s mouth’s point of view? You tell me what’s going on in this…

That Makes Alien³ Look Much Better!

Alien 2: On Earth is a nice little oddity for fans of the franchise. It’s not one of the best unofficial sequels ever but it’s worth it for some bonkers gore and a good laugh. If you want more Alien oddness, check out the version of Alien³ you never got to see…