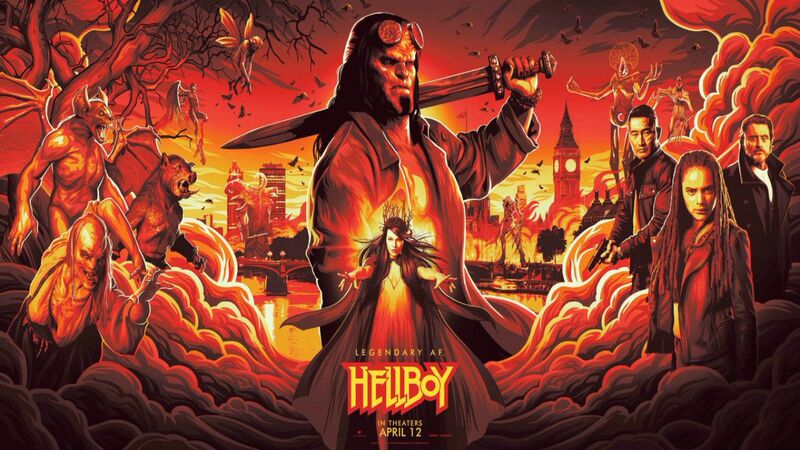 The First ‘Hellboy’ Trailer Proves This Is a Bloodier, More Savage Beast

It’s no secret that director Neil Marshall’s upcoming R-rated Hellboy remake aims to differentiate itself from Guillermo del Toro’s beloved 2004 movie. Such was the main conversation during New York Comic Con’s Hellboy panel. How far would Marshall — a genre-savvy horror director responsible for such nightmares as Dog Soldiers and The Descent — lead Red from Del Toro’s majestic fantasy realm?

According to Hellboy creator Mike Mignola, “Neil took a much more grounded, darker horror approach and when you have Neil Marshall, why not push for ‘R’?” Fans were itching to see this new approach proven right, and as the lights darkened and the first Hellboy trailer played, they were.

The New ‘Hellboy’ Is Much More Violent

One of the very first shots of the trailer — which hasn’t been released outside of Comic Con yet — features Hellboy pressing his hand cannon to an enemy soldier’s head and blowing his bloody brains right into the camera. No censor. It feels like Marshall’s quickly assuring viewers that David Harbour’s Hellboy wears no leash, and Marshall’s not pulling any punches. “Mony Mony” by Billy Idol blasts.

Habour’s Hellboy Is “More Down and Dirty”

Harbour’s Hellboy exits an armored transport wagon as an errant bullet dings off his open door. “I’m on your side!” he shouts. Harbour’s naturally dominating stature, augmented by a bodysuit, immediately reads as less assured than Ron Perlman’s cigar-chewing Red —  this Hellboy isn’t fully comfortable in his formidable body yet. Just as Marshall is not Guillermo Del Toro, Harbour is not Perlman. The trailer, and character, already feel markedly different.

Harbour himself owns the difference. He said during the panel, “My approach is more down and dirty. My Hellboy feels a little younger, [he has] more inner turmoil and strife with Broom (Ian McShane), and [he’s] lost in the universe. Mike’s stuff, to me, is existential horror.” Harbour also described the film as “a monster movie right out of Frankenstein updated to 2018,” a description that rings true throughout the trailer.

Oh, and don’t worry, Harbour’s Hellboy is serving very similar Chief “Daddy” Hopper vibes. Co-star Sasha Lane (who plays Alice Monaghan) had no problem proclaiming her attraction to Hellboy, which is a testament to just how dynamite that bodysuit looks on camera. “I fell madly in love with Hellboy — David, costume off, you aight,” she joked.

We’ve all seen the “Legendary AF” tagline on Lionsgate’s first poster, and the trailer keeps that flippant tone with the words “Save The World, Just For The Hell Of It.” Expect a self-aware superhero movie that won’t take itself too seriously. Marshall’s sense of humor rings true in the trailer, especially when the Bureau for Paranormal Research and Defense (B.P.R.D.) front gatekeeper asks for Hellboy’s ID. Marshall may be aiming for a grounded and darker feel, but there’s still a lighthearted soul underneath. And Harbour’s the perfect Hellboy to toe that line.

It’s bright, too. The scenes are a bit more colorful than expected, even when the subject matter isn’t. During one of the more iconic and memorable scenes of the heavily smash-cut trailer, entire cities are flooded by rivers of lava as Red surfaces with a flaming sword.

Maybe most importantly, we get our first look at the incomparable Milla Jovovich as Nimue the Blood Queen. Her lair has a very Lord of the Rings feel, where girthy tree roots have the power to lift an entire wooden cabin (one of the trailer’s more visually stunning shots). Jovovich’s signature badass female persona translates effortlessly into Nimue — she’s reminiscent of Cate Blanchett as Hela and sure to become a fan favorite.

Marshall’s keeping true to Hellboy’s underworld population with a gallery of snarling rogues, bear-headed guards, and larger-than-life giants. You might even see some B.P.R.D. cameos that Harbour desperately wanted to spoil, but all he could do was give fans a clue by closing his hand like a claw multiple times. Decode that as you will, Internet.

Hellboy‘s trailer proves that Marshall’s Hellboy is a bloodier, more savage take. Quick cuts keep the trailer moving briskly, even as Hellboy smashes everything in sight with his Right Hand of Doom (Harbour’s personal favorite toy). It’s a hell of a trailer for a hell of a hero.