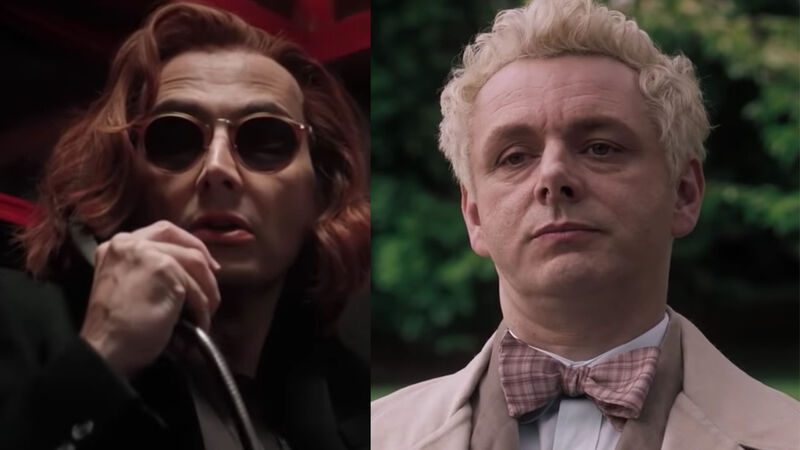 In 1990, Neil Gaiman and Terry Pratchett teamed up to write a dark and hilarious book about an unlikely pair of frenemies, Aziraphale the angel and Crowley the demon, who team up to try and prevent Armageddon. Now that beloved book, Good Omens, is being adapted into an Amazon series set to premiere in 2019, and fans couldn’t be more excited.

Gaiman, who also serves as executive producer on the series, and the Good Omens cast — including Aziraphale (Michael Sheen) and Crowley (David Tennant) themselves — stopped by New York Comic-Con today to gift fans with a fantastic first trailer and answer some questions about the much-hyped adaptation. They didn’t disappoint, and here’s everything we learned.

Fans might have mixed feelings about this, but Gaiman confirmed that the Good Omens screen adaptation will deviate from the book in three big ways: there’s a new character, a new backstory, and possibly a new ending.

First, Jon Hamm will play the super annoying archangel Gabriel, who’s only ever mentioned in the books but will become a much more central character in the show. Second, Episode 3 will give us a whole history of Crowley and Aziraphale’s relationship spanning from the Garden of Eden up until present day. Gaiman said, “You get to see how their relationship evolved and changed, how they became friends, the times they’ve fallen out. We got to go to Shakespeare’s Globe Theatre and ancient Rome, we’ve got a 1940s spy drama. We [visit] 1969 SoHo.”

And, lastly, the series might have a very different ending than the book. “If I did [the book’s] ending, then the book story would end, and you’d still have half an hour of television while people said goodbye to each other,” Gaiman explained of the creative deviation. “So I decided to reconfigure things, and now there is a plot that takes until the final second of the final episode.”

Aziraphale Himself Is a Gaiman Superfan

Everyone in the Good Omens cast has some sort of pre-Good Omens connection to Neil Gaiman — Tenant was heartbroken when Gaiman came to write for Doctor Who the season after he left — but Sheen is a very longstanding Gaiman fan. He devoured Gaiman’s Sandman series when he first moved to London in 1990 to start drama school. “[Sandman] changed my world, changed my life, and eventually led to [me and Neil] becoming friends, and then eventually led to me being part of this story.”

Sheen and Gaiman also share an unexpected Archie Comics connection. “Something that bonds me and Neil together is that we have daughters who are sort of obsessed with Archie and Jughead comics,” Sheen laughed. “Neil very, very kindly donated a lot of his daughter’s comics [to my daughter].”

“The Doomsday Clock is currently set at about 15 seconds to midnight,” Gaiman responded when asked why now is the right time to pen an adaptation of Good Omens. “It makes doing something that may possibly be the funniest six-hour drama about the end of the world and how we’re all going to die very appropriate for right now.”

The author has a second project at New York Comic-Con this weekend, the Starz adaptation of his 2001 novel American Gods. With its themes surrounding the magic and importance of immigrants, he’s been told it’s proven similarly prescient. “I think [it’s] partly because we live in interesting times,” he said, “and partly because sometimes it’s the function of artists and art to pick up on things that are going to happen a little bit before they do happen, and to bring them to peoples’ attention; often as a warning, often ignored.”

Good Omens will premiere on Amazon in 2019.