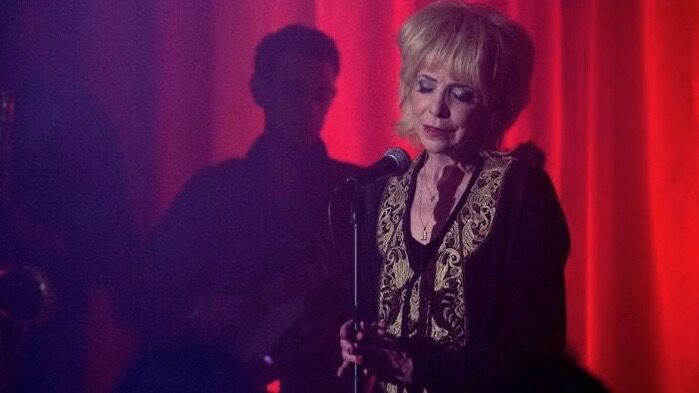 One of the best things about Twin Peaks: The Return is the end of each episode, when a musical act plays over the credits. Or even during an episode. Each band or solo artist takes to the stage at The Bang Bang Bar and launches into a song as the audience tries to make sense of what they’ve just watched. But who are they? And what are they playing? Scroll down to find out…

The final song performed in Twin Peaks: The Return couldn’t have been more fitting – Julee Cruise, responsible for the show’s theme tune, performing a song that we first heard her sing at the end of Season 2. The World Spins actually dates back to before Twin Peaks, appearing on her 1989 debut album Floating Into the Night. But the words are by David Lynch and the lyrics by Angelo Badalamenti, and so it all comes full circle. Cruise again performs the song on the Bang Bang Bar’s stage, though this time she is backed – in shadow – by frequent performers Chromatics. As for Lynch’s direction of the scene, Cruise told the LA Times “He said, ‘Julee, you are a child full of wonder.’ And he meant it. If he means it, then I’m going to do it.”

Song: Out of the Sand

Introduced by his birth name Edward Lewis Severson, Pearl Jam frontman Eddie Vedder appeared on The Roadhouse stage at the end of Episode 16. Vedder sang a beautiful acoustic number called Out of the Sand, which he has played live, but is yet to appear on a record. And while it’s a beautiful song, seeing Vedder pop up in a Twin Peaks episode does kind of take you out of the show. A bit like that Nine Inch Nails appearance at the end of Episode 8.

His performance was followed by the Bang Bang Bar’s house band doing a rendition of Audrey’s Theme as Sherilyn Fenn danced and things got REALLY weird.

Three members of London five-piece The Veils appear at the end of Episode 15 of Twin Peaks – Finn Andrews, Sophia Burn and Umberto Rapisardi. They perform the track ‘AXOLOTL,’ which combines electro and rock, and comes from their 2016 album ‘Total Depravity.’ David Lynch is a longtime fan, and announced their involvement in the show in 2016. And he’s not the first filmmaker to use The Veils on a soundtrack, with the likes of Tim Burton, Paulo Sorrentino and Lee Tamahouri featuring their music on Frankenweenie, Il Divo and The Devil’s Double respectively.

Otis Redding’s ‘I’ve Been Loving You Too Long’ also appears in an emotional scene early in proceedings, while ZZ Top’s ‘Sharp Dressed Man’ gets an unexpected outing at The Bang Bang Bar late on.

Elisabeth Corrin Maurus sings via the stage name Lissie and performs at the end of Episode 14 alongside band members Eric Sullivan, Lewis Keller and Jesse Siebenberg. The song she sings is ‘Wild West’ from her 2016 album ‘My Wild West’ and is an up-tempo rock number that showcases Lissie’s amazing voice. And it’s probably the wildest that the crowd at the Bang Bang Bar have gone for any artist thus far.

This is a great moment for fans of the original Twin Peaks. In Episode 6 of that show, James Hurley (James Marshall) recorded a song called ‘Just You’ in the Hayward’s living room, with brunettes Donna Hayward and Maddy Ferguson on backing vocals. The chemistry between James and Maddy upsets Donna, and she runs out of the room.

In Episode 13 of ‘The Return’ James takes to the stage of The Roadhouse to again sing the song, another pair of brunettes singing back-up. While he’s performing, the action cuts to Renee – last seen in Episode 2 – sitting in a booth and becoming visibly upset by the performance. Doubt we’ll ever find out why, but it’s  nice callback.

As for the song itself, it’s a slow-burning ballad, with music by Angelo Badalamenti, and lyrics by David Lynch.

Following their performance at the end of the season opener, Chromatics made a second Twin Peaks appearance at the end of Episode 2, popping up in the Bang Bang Bar to sing the song ‘Saturday’ while more melodrama played out onscreen. The tune comes from their ‘Windswept’ album which hit shelves on May 10.

This one means a lot. The final scene of Episode 11 takes place in an Italian restaurant, with a pianist playing the song ‘Heartbreaking’, composed and performed by none-other-than Angelo Badalamenti. Badalamenti first collaborated with David Lynch on the Blue Velvet score, and since then the pair have worked together on the likes of Wild at Heart, Lost Highway, Mulholland Dr. and The Straight Story, as well as the original Twin Peaks series and Fire Walk With Me. It’s a beautiful, melancholy piece, and seems fitting that it plays as Dougie wolfs down “damn fine” cherry pie and it seems like the old Dale Cooper is sparking back to life.

The latest artist to take to the stage at Twin Peaks’ Bang Bang Bar is Rebekah Del Rio performing the song “No Stars” ahead of the end credits. The track is from her 2011 album Love Hurts Love Heals. The song was co-written by David Lynch. Interestingly, Del Rio also made an appearance in Lynch’s Mulholland Dr. In the 2001 film, the singer-songwriter performed “Llorando”, a Spanish-language version of Roy Orbison’s “Crying”. Could her appearance in both point to a possible shared universe?

But back to the closing moments of Episode 10. Look closely, and the guitarist on stage also looks familiar. It’s none other than electronica supremo, Moby, hanging up his keys to take on strumming duties in the background. Moby is a long-time fan of Twin Peaks. He sampled “Laura Palmer’s Theme” in his track “Go” which went on to become his first hit.

Song: A Violent Yet Flammable World

Au Revoir Simone – the show closers from Episode 4 – are at it again at the end of Episode 9, returning to the Bang Bang Bar stage for a rendition of ‘A Violent Yet Flammable World’, from their 2007 album ‘The Bird of Music.’ The band posted the scene on their YouTube channel (see above) with singer-songwriter Sky Ferreira also appearing, but in an acting role. And this was the first episode to close with two artists performing, ARS hitting the stage after DJ Hudson Mohawk had performed new song ‘Human.’

Ten minutes into the eighth episode of new Twin Peaks, an MC takes to the stage at The Bang Bang Bar, and says “Ladies and gentlemen, The Roadhouse is proud to welcome The Nine Inch Nails.” What follows is one of the more surreal moments in what’s already been a pretty surreal series, as Trent Reznor and co do their thing, and a band that’s famous in the real world appears in this fictional bar in a fictional town on a fictional show. It isn’t the first time Reznor has worked with Lynch, with the pair collaborating on the Lost Highway soundtrack, and Lynch directing the video for Nine Inch Nails track “Came Back Haunted”. As for the song, it’s a relatively new track that’s taken from the December 2016 EP Not the Actual Events.

Episode 7 throws a curveball into proceedings as there’s no Bang Bang Bar finale, meaning there’s no live performance. What there is however, is a song playing on the diner’s jukebox over the end credits, and that song is Lynchian as hell. “Sleep Walk” is an instrumental that was written, recorded and released by brothers Santo and Johnny Farina in 1959. It’s appeared in countless movies and TV shows set in the 1950s and 60s, from Mermaids and Coup De Ville to Mad Men and Quantum Leap. And in-keeping with the dream-like nature of Twin Peaks, the song came to one of the Farina brothers in his sleep.

Four-piece Sharon Van Etten consist of Zeke Hutchins, John Phillip Iron III (great name) Carolyn Pennypacker Riggs (even better name) and singer-songwriter Sharon Van Etten. The song “Tarifa” is a ballad that combines Hammond organ and bass clarinet with Van Etten’s stunning voice, and builds to a beautiful crescendo. The track is taken from their equally beautiful 2014 album Are We There?.

Trouble are Dean Hurley, Sam Smith, Alex Zhang Hungtai and Riley Lynch, who is David’s son. Their instrumental track doesn’t appear over the end credits, but during a scene in the Bang Bang Bar late in proceedings. It’s the band’s world debut, with their record label stating: “There may never be any more music from Trouble, but this 45 serves as physical evidence of the group’s continued existence in a parallel cinematic universe, grinding out late night Roadhouse gigs in the fictitious town of Twin Peaks, Washington.”

Another electronic act – this time from Brooklyn – Au Revoir Simone is a three-piece that formed in 2003, and take their name from a line in Pee-Wee’s Big Adventure. David Lynch is a long-time fan, and they even played at a retrospective of his work in Paris, performing on a recreation of the Eraserhead set. The dream-like “Lark” comes from their 2007 album The Bird of Music.

Hailing from Minneapolis, The Cactus Blossoms are Jack Torrey and Page Burkum, and together they play country music that harks back to simpler times. They are also huge fans of Twin Peaks, which Torrey says made getting the call from David Lynch “extra cool.” Mississippi comes from their debut album You’re Dreaming, and sounds like the greatest song The Everly Brothers never recorded.

Chromatics are an electro four-piece from Portland, Oregon. Formed in 2001, they’ve released five albums thus far, while their music has appeared in the likes of Revenge, Gossip Girl, Bates Motel, and Ryan Gosling flicks Drive and Lost River. Shadow is their tribute to David Lynch movie Blue Velvet and Twin Peaks songstress Julee Cruise, so it’s no surprise that the song made it onto the end credits of the first two episodes.