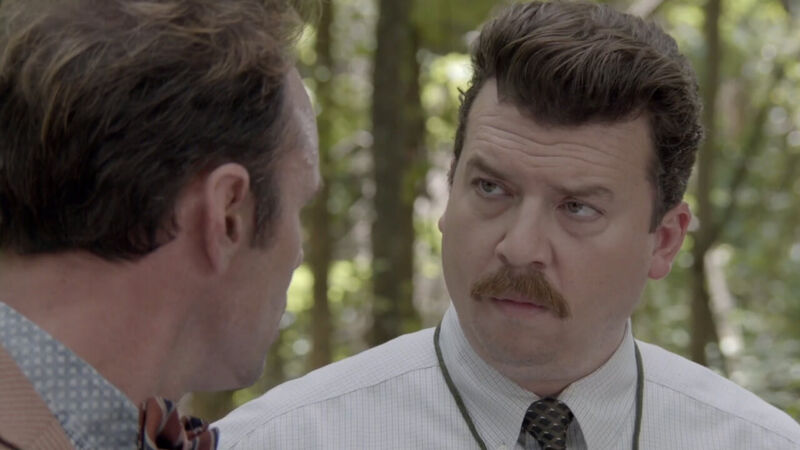 If the first episode of HBO’s new half-hour comedy series Vice Principals was mean, the second is absolutely vicious. After discovering that they had been passed over for the principal position at Lincoln High, vice principals Lee Russell (Walton Goggins) and Neal Gamby (Danny McBride) decided to team up to take the new principal, Dr. Belinda Brown (Kimberly Hebert Gregory). While list week’s episode featured a little bit too much of McBride playing stupid, this week had a generous mix of its two leads, serving up menacing black comedy like a lunch lady serves up green meatloaf.

This week’s episode starts with Gamby and Russell plotting their takedown of Dr. Brown from a secret hiding spot in the woods behind the school. Russell has created a massive binder of information on the new principal and has discovered that she routinely fires everyone from the front office at each school she goes to. Concerned for their jobs, the two set out to make themselves look good while ruining everyone else. Their hatred of Brown is easy to understand, as the good doctor is condescending and catty. In this game of high school thrones, there are no heroes.

In order to better assess the staff at Lincoln High, Dr. Brown brings in a Bond-villain-esque inspector, Blythe Sason (Danny Boushebel). He leers and lurks in corners, sunglasses up and notepad out, putting Gamby and Russell on edge and making them behave even more badly than usual. The two are at their best when working together, even if they throw insults at one another left and right. It’s definitely a contentious relationship, and they agree early on that as soon as Brown is gone, they will return to being enemies. It’s a shame because they are delightful as partners.

The first to fall in the line of Dr. Brown’s fire is the sweet front desk receptionist, Mrs. Libby (Celia Weston). Sason determined that she comes to work every day a half-hour late because of her “power-walking group”, which Dr. Brown just can’t abide. Brown forces Gamby to fire Libby, and sends Sason to sit in the office while he does the deed. It’s absolutely brutal. Libby has worked at Lincoln High since the mid-eighties, and when Gamby first tells her she’s fired she begins to laugh because she thinks he’s kidding. When he tells her that he’s not, she immediately blames Brown, and Gamby has to try to protect his own behind in front of Sason by telling her that she “sucks at her job.”

Weston is incredible in her resulting tantrum, throwing things off of Gamby’s desk and telling him all of the things he should do for her since he fired her. She tells Gamby to call her husband, Mr. Libby, and tell him that he can’t retire because she’s been forced to. On her way out the door, she shouts that she’ll “stop at the thrift store on the way home, since we can’t shop at the mall anymore!” She’s heartbroken and furious, her righteous rage at being fired after almost 30 years of work tangible.

Up until this point, Mrs. Libby has been just like every front-desk receptionist at every high school across America, the face of the administration for both students and their parents. Every school had one, a sweet lady with a bowl of candy who was just happy to be a part of the education system. When Libby gets fired, it hurts, and it’s a fine example of this show’s ability to evoke emotion.

Libby’s firing also sets up the show’s best sequence, giving fuel for the fire of Gamby’s rage. He tags along with Russell to do some “recon” at Brown’s house, digging through her trash in an effort to find tidbits of information that might be useful. Instead, Gamby decides to break into the house itself, punching through the window and letting the two of them into the ridiculously-decorated home. There are photos of Brown everywhere, along with plaques and trophies announcing her success. It’s too much for Russell, who begins smashing small objects.

Russell goads Gamby into joining in, and soon the two are destroying everything in the house with pure joy. They kick through paintings, smash chairs into the walls until they stay there, and Gamby even jumps through a glass coffee table. Russell takes things a step further and lights the curtains on fire, calmly telling Gamby that he’s “burning the whole motherf*cker down.” The two then run out of the house like Abbott and Costello and speed away in their Student Driver getaway car. It’s a superbly fun segment of television, and viewers can easily get behind the destruction of Brown’s property after the way she destroyed Libby’s life.

After the dust has settled and the two have returned to work the next day, they are called into Brown’s office. Clearly terrified about the possible repercussions of their actions, they await the gallows before their new boss. Instead, she informs them that Sason found the two of them to be fine vice principals, and that she is glad to have them around to help her while she picks up the pieces after her house burned down. It’s a great reveal and a bitter twist of irony that works.

The episode also featured a subplot with Gamby being unable to pay the stable fees for his daughter’s horse, Shadowfax, and Russell’s wife and mother-in-law were introduced. Both were nice bits of characterization for these two hopeless souls, but the driving force of Vice Principals is Gamby and Russell wreaking havoc in the name of what they think is right.