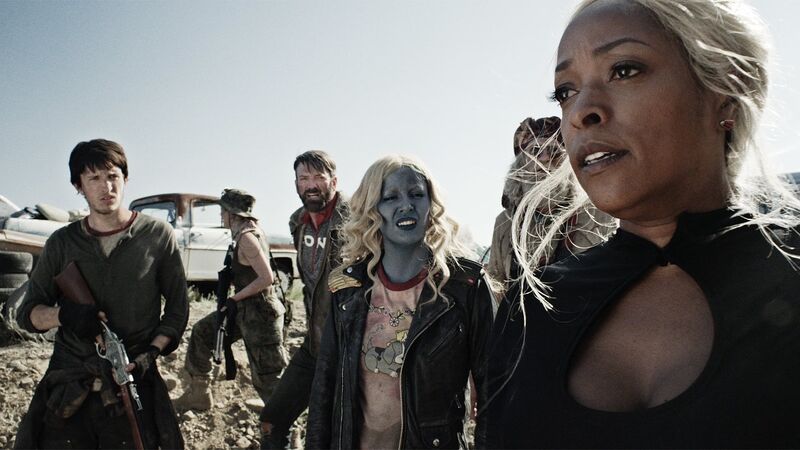 Itching to “whack some Zs?” San Diego Comic-Con has got you covered! On Thursday, the cast and crew of SYFY’s undead hit  Z Nation gave fans a taste of what’s in store for Season 5. After last season’s of a cliffhanger, the Indigo Ballroom was champing at the bit — more like chomping — for all the juicy tidbits. And by the looks of things, the zombie apocalypse is about to get a bit political. Here’s what’s ahead for Z Nation Season 5.

From Walkers to Talkers

“I think the zombie apocalypse has already been a stand-in for what’s the worst that can happen,” explains series co-creator and writer Karl Schaefer. “Our characters finally make it to Newmerica and they meet up with this new character George, who’s kind of like the new George Washington. There’s a huge incident that happens in the opening episode that blows the country apart, and our characters have to save this new nation, killing one zombie at a time.”

It wouldn’t be a new season without a new type of zombie, though, and Z Nation Season 5 is no exception. “The black rain caused a side effect and gave all the zombies a level of consciousness,” Schaefer continues. “This season, zombies can talk. They’re called Talkers. They can think and cause various sorts of trouble.”

That new element of consciousness presents a different, albeit familiar-feeling, sort of conflict to this new society. What happens when these evolved zombies strive for citizenship amid a land full of dominant humans? Lydia Hearst’s addition to the series — she’ll be playing a zombie-human hybrid named Pandora — will further paint a picture that feels reminiscent of America’s current immigrant crisis.

But as heavy as this all sounds, rest assured that this is still the Asylum-made series fans have grown to love over the past five years. Warren (Kellita), Murphy (Keith Allan), and Doc (Russell Hodgkinson) will continue to find themselves in their fair share of sticky predicaments. But will the new episodes pay-off their apocalyptic, world-killing near-death from last season’s finale? That kind of remains unclear.

“We have a lot of story characters that are left open in part because we need them and we love them,” Schaefer explains. “We kind of play with the way the apocalypse is chaotic; where people come and go and things happen to them. It’s sort of intentional … where we don’t know what happened to them.”

With promises of a Las Vegas-style oasis amid the chaos — with Murphy acting as the sinful town’s mayor — and the return of DJ Qualls’ Citizen Z, it looks like Z Nation Season 5 may be the show’s best yet. As the end of the apocalypse continues to evolve, the ongoing journey to Newmerica will surely be a bloody bonkers ride.