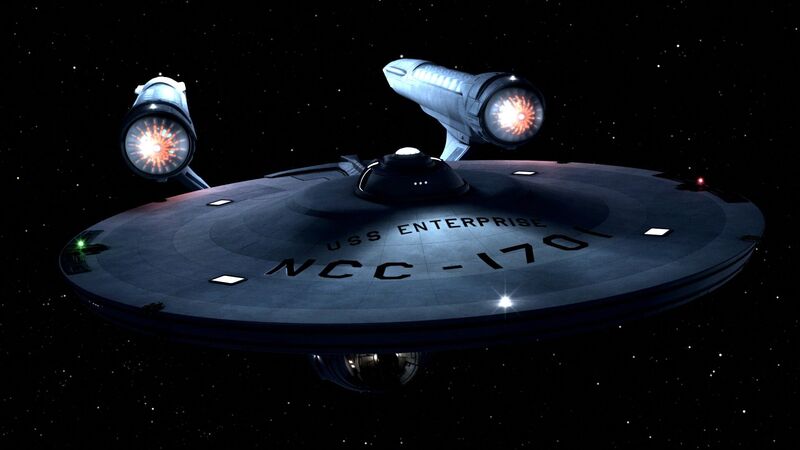 Star Trek Beyond is the first of the new Trek films that embodies the classic series‘ adventurous spirit and hopeful tone. Seeing as how 2016 is the 50th anniversary of the USS Enterprise and its faithful crew, it seems fitting to take a look back at the series that started it all. Here are the ten best episodes of Star Trek, as chosen by a Trek nerd who will endanger his own life by saying that Star Trek is better than Star Wars.

Though the premise of this episode is a little goofy – a transporter accident splits Captain Kirk into two different beings – it’s in service of a strong character study about the man who runs the Federation‘s flagship. One Kirk is rash and impulsive while the other is so docile that he lacks the ability to lead. What starts as a simplistic Good Kirk vs Bad Kirk story ends up being much more complex than simple morality. It’s a jaunty and surprisingly poignant way to introduce yourself to James T. Kirk.

Sure, this episode is infamous for Clint Howard‘s offer of Tranya, but it’s also a great showcase for Kirk’s tactical mind. The titular maneuver is a sly bit of cunning on Kirk’s part that shows he’s not someone you’d want to play poker with. The episode is also a great example of how such a limited show could craft tension out of a few hokey sets and a fantastic cast.

Possibly the greatest episode in the entire history of the franchise, this introduction to the Romulans serves as a submarine battle in space. Not only is the suspense masterfully executed, but the real punch comes from humanizing the enemy at every turn. The Romulan commander‘s final line to Kirk (“In another reality, I could have called you friend.”) is a sharp reminder that warriors are neither good nor evil. They are just men on a mission, fighting for whatever they believe is the right thing to do.

This one is notable for its silly creature – a prop that was actually carried over from an episode of The Outer Limits – but also for another tale about understanding something we fear. Spock‘s mind meld with the monstrous Horta reveals that its murderous actions are not based in malice but protection. A rare dip into something resembling horror for the series, but one that ends on a note of acceptance.

Easily the most beloved of the original series episodes, this classic tale of time travel asks one of the most painful of science fiction questions: should a good person die so that history may remain intact? “The City on the Edge of Forever” strikes at the core of Star Trek‘s ethical quandaries while providing one of the most emotional episodes for William Shatner, proving that he isn’t always the scenery-chewing ham people make him out to be.

The best examination of Spock and Vulcan life in the entire series. “Amok Time” is also a fantastic exploration of the friendship between Kirk and Spock. Not even battling together to the death can separate these two compatriots. Plus, we get to see Spock in the emotional throes of pon farr. Any time Spock breaks from his cooly logical demeanor is a treat.

Maybe the most enjoyable episode for fans, “Mirror, Mirror” depicts an alternate evil reality where the crew of the Enterprise are all diabolical conquerors. It’s delightful to see all the actors play extremely arch – especially a scar-faced George Takei – and even reaffirms Spock’s position as the most reasonable of the crew. This one is worth it simply for the gleeful malice of the cast.

Cold War paranoia and the threat of “the bomb” permeate this chilling episode about a destructive machine that’s out of control. This one is a blast thanks to the seemingly unstoppable doomsday machine and the obsessed Commodore Matt Decker. Star Trek always pushed a noble agenda of peace in a time of terrifying conflict, and “The Doomsday Machine” is the best example of this. Plus, the monster is pretty iconic!

Meet Spock’s parents! Not only do we get to explore Spock’s relationship with his Vulcan father and human mother, but there’s also murder afoot! The Murder on the Orient Express setup is really a backdrop for a great familial bit of character development, and it doesn’t hurt that Leonard Nimoy is at the top of his game in this episode.

“The Trouble with Tribbles” (season 2, episode 15)

One of the things people often forget about Star Trek is how consistently funny it is. The show’s humor – mostly thanks to interactions between Kirk, Spock, and Bones – is part of its enduring charm, and “The Trouble with Tribbles” could very well be the funniest episode in the series’ run. But it’s not all yuks; there’s an insidious mystery afoot that Kirk has to solve. No other episode serves as a better introduction to how much joy Star Trek is capable of producing.