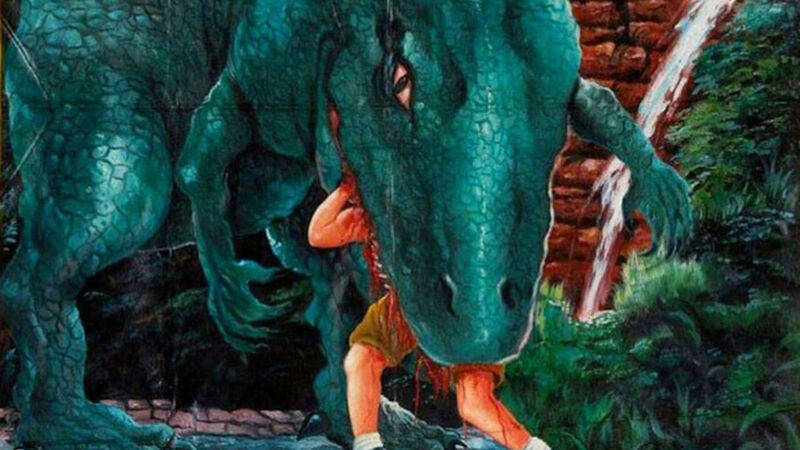 It’s easy as a film fan to become disillusioned with where the artform has found itself. Sequels and remakes plague the schedules of the multiplex. Not all are great. CGI dominates where more organic methods of filmmaking once thrived. Tricks and techniques that possessed an innate magic and soul are on the verge of being wiped from existence. Films are great. Film will always be great. But sometimes it’s hard not think that films should just be great-er. Less formulaic. Riskier.

If you’re looking for a little pick-me-up, then allow us to recommend a deep dive into the astonishing world of West African promotional film posters. Produced in the 1970s, ’80s and ’90s when civil war and corrupt government halted the import of printing presses, the posters used to advertise films were instead hand-painted, often on one side of a 50kg bag of flour, or sometimes two sides stitched together, often by artists who’d never seen the movies they were trying to sell.

“These posters were based on our imaginations,” Frank Armah told The Atlantic. Until technology replaced this organic process of film promotion, Frank drew posters for Ghanaian cinemas. “Sometimes the poster ended up speaking louder than the movie.”

The posters were normally used to promote ‘video clubs’, gatherings of film fans in areas where electricity wasn’t standard, where people would pay a fee to watch a movie, hooked up to a VHS player powered by a generator. Horror was popular, as was action and Bollywood, though Ghanaian and Nigerian films were also in demand. Both countries have impressive film industries of their own.

After Bollywood, Nollywood – from Nigeria (in some areas of the industry this is a term not wholly liked, due to it being coined overseas; specifically, the New York Times in the early-noughties) – is believed to be the biggest film industry in the world, according to a statement by the United Nations Educational, Scientific and Cultural Organization (Unesco) in 2009.

The posters are often, unquestionably, hilarious. But also a reminder of the sort of artistic personality, charm and weirdness that has been neutered the safer and more linear Hollywood has become. There’s something inspiring about the way these artists interpreted the often verbal descriptions of the films related to them. Surreal Pictionary, so to speak.

From Peanuts to Big Bucks

It’s worth remembering that the artists who created these masterpieces were originally paid a pittance, but in the wake of Los Angeles art dealer Ernie Wolfe shining a spotlight on the practice – after travelling across Africa in the ’90s and discovering the trend, Wolfe published two books collecting more than 500 of the posters in two books, Extreme Canvas and Extreme Canvas 2 – there’s now a global market for both existing West African film art, and West African film art made to order. Some sell for up to $10,000 a pop.  Whipround anyone?

“There is, needless to say, something immensely satisfying about seeing an image you originated … reworked and rediscovered this way,” wrote Barker in the intro to one of Ernie Wolfe’s books.