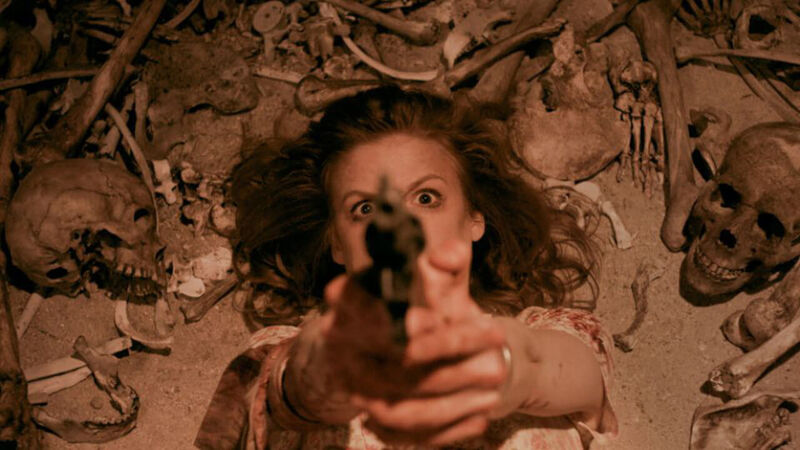 Movies about humans hunting human have never really been out of fashion.  The mass saturation of these kinds of films was in the late 70s through the early 90s but they’ve popped up almost since the advent of moving pictures.  Lately, with the recent release of The Purge: Election Year and Carnage Park as well as the upcoming release of Rob Zombie’s 31, the concept is back in vogue.  So in honor of the current glut of movies about men who hunt men here are ten more to fill your primal urge.

World-renowned hunter Bob Rainsford (Joel McRea) is shipwrecked on a mysterious island.  Luckily for Bob, the island is owned by a man named Zaroff (Leslie Banks) who maintains a palatial homestead there.  Unfortunately for Bob, Zaroff is an avid hunter himself who has hunted all the greatest prey in the known world and grown bored of the lack of challenge.  The solution Zaroff has created to give himself a challenge is to hunt the most dangerous prey of all: mankind.  Zaroff turns Bob loose in the woods with a knife and his wits and then sets out to kill him and put his head in his trophy room.

Based on the short story of the same name by Richard Connell, The Most Dangerous Game represents a symbolic if not the literal starting point for the humans hunting humans subgenre.  The movie itself is a tad hokey.  Leslie Banks is a more flamboyant forebear to Vincent Price here and the camera loves to zoom in on him while he’s mugging.  The film is only an hour long and still manages to stretch itself hopelessly thin, saving the hunt for the final twenty minutes.  Also, Fay Wray could literally be removed from the movie without affecting anything but the dialogue.  The Most Dangerous Game is still a very well-shot movie and captures much of the chill of the original story so long as one gives it some slack for the age of cinema in which it was made.

Ben (Jeremy Irvine) is a tracker and a guide who gets an offer of $1000 a day to take a hunter out into the desert in search of bighorn sheep.  The hunter, Madec (Michael Douglas), is a rich trophy collector with no respect for anyone and an odious attitude.  Whilst on the hunt, Madec accidentally shoots and kills an old man.

In an attempt to keep himself and his business out of trouble, Madec offers Ben a sizeable sum of money to cover up the incident and pretend it never happened.  When Ben refuses Madec’s offer, the older man holds him at gunpoint and forces him to remove his clothing and walk off into the desert.  Madec doesn’t want to kill Ben if he doesn’t have to but he wants him to die of exposure.  Now Ben tries frantically to find a way out of his predicament as Madec trails him and sabotages every attempt he makes to survive.

Beyond the Reach is based on the young adult novel Deathwatch by Robb White.  The book was previously adapted as Savages in 1974 with Andy Griffith as Madec.  The movie changes a fair amount from Deathwatch but keeps the story’s spirit firmly intact.  Jeremy Irvine is a strong lead and Michael Douglas’ villain is at times charming and contemptible.  The movie is harrowing, tense, and beautifully shot.  The only major issue is that the last fifteen minutes completely eschews Deathwatch’s ending for eye-roll inducing Hollywood nonsense.

An un-named man (Cornel Wilde) is leading a safari in the African Savannah.  When one of his charges refuses to give a gift in tribute to a local tribe, the entire group are seized and murdered for their insult.  Only the man is left alive, his death sentence is “the lion’s chance.”  He is sent out into the wild completely naked and with no gear of any kind.  After a small head start, the man is pursued by a party of hunters with spears.  If he can find help before he is caught by the hunters he can survive, if Africa doesn’t kill him first.

The Naked Prey is an excellent concept.  Our hero is left at a complete disadvantage and the early scenes are especially thrilling.  Unfortunately, the movie loses momentum towards the middle as the man befriends a young native child.  There are several quiet scenes which are perfectly beautiful but the movie would do better to be one long chase sequence with no dialogue.  While The Naked Prey does a decent job of showing the African tribesmen in a respectful way for the time, a scene involving Arab slavers features some very ugly racial stereotypes and actors whose skin has obviously been darkened to play a different race.

Two couples (Peter Fonda, Warren Oates, Loretta Switt, and Lara Parker) are taking their RV through rural Texas when they witness a satanic ritual.  After witnessing a human sacrifice, they’re discovered by the cultists and manage to escape with their lives.  Unfortunately no matter where they go, the cultists seem to find them.  Paranoia and fear run wild as seemingly the entire state of Texas is out to kill them.

Race With the Devil is exquisite trash; it’s Deliverance with a dash of satanic panic and a heaping spoonful of car chases.  Fonda and Oates are the picture of ’70s cinematic machismo while Switt and Parker help flesh out two fairly one-dimensional roles.  The car chases and crashes are thrilling and the paranoia pervades every frame.  The ending is a bit too abrupt and the whole thing is a pretty cheap thrill but it’s a lot of fun.

Thomas Burns (Rutger Hauer) offers Jack Mason (Ice-T), a homeless man, a decent sum of money if he will serve as a guide for a hunting trip that he and some friends are taking.  When Mason gets to the mountains he finds that what Burns and friends (Gary Busey, John C. McGinley, Charles S. Dutton, F. Murray Abraham, and William McNamara) will be hunting is him.

Surviving the Game is probably the most blatant The Most Dangerous Game ripoff on this list.  It’s a typical mid-90s action movie complete with silly one-liners, explosions, and Gary Busey.  The murderer’s row of great character actors are sadly underutilized but a couple of them have great scenes.  The plot is nothing spectacular and the film dispatches with the more interesting characters too early on but it’s a decent movie about humans hunting humans.

In a dystopian future, dissidents are held in a prison camp by the sadistic Thatcher (Michael Craig.) Now a group of prisoners led by Paul Anders (Steve Railsback) is led out into the wilderness and hunted.  Among the pursuers are a woman with a crossbow that shoots explosive bolts and a man in a tank with a werewolf-like sidekick.

Turkey Shoot is Brian Trenchard-Smith’s schlocky masterpiece and one of the greatest Australian exploitation films.  The film is filled with nearly every hallmark of exploitation films.  Railsback is appropriately grizzled in the lead role and the villains are all colorful and appealing.  It seems counter-intuitive to make a movie about humans hunting humans that is this silly and fun but it’s a joy to behold.

David Mann (Dennis Weaver) is commuting down a desert highway when he pulls up behind a large semi-truck belching out smoke.  Mann passes the truck, unwittingly making himself a target of the truck’s driver.  The truck dogs Mann all along his journey, never leaving his presence for very long.  Eventually, the game turns deadly as the trucker tries in earnest to end Mann’s life.

Duel was one of the first full-length movies by Steven Spielberg.  Though it’s a TV movie, Duel shows all the care and craft for which the filmmaker is now known.  Based on a short story of the same name by Richard Matheson, the film is deliberately simple.  We never know who the truck driver is or why he’s after Mann, we simply know that he’s out for blood.  Being stuck with Mann’s perspective makes the viewer feel isolated and scared with him as he tries to solve his predicament.

Sally Jones (Rachel Ward) is a teacher in a one-room schoolhouse in rural Australia.  One day a group of armed men in masks take Sally and her entire class of children, between the ages of six to fourteen, to hold for ransom.  The class manages to escape but their captors are in hot pursuit and cut a bloody swath of destruction to the countryside.  Eventually Sally and the kids have their back to the wall and she realizes that the only way out is to kill the men who are chasing them, the only problem is that she’ll need help.

Fortress (not to be confused with the 1992 movie of the same title starring Christopher Lambert) is a rather disturbing movie.  The young age of the children involved makes the film’s very bloody subject matter particularly unsettling.  Though the robbers hunting the kids is a disturbing subject it’s when the kids turn the tables in the third act that the film becomes especially disquieting.  Fortress is a one-of-a-kind movie and deserves to be more well-known even among genre buffs.

A squad of National Guardsmen (Keith Carradine, Powers Boothe, Peter Coyote, and Fred Ward among others) is performing a training exercise in a Louisiana swamp when they find a river too large to cross on foot.  The group borrows some canoes left unattended by the locals and crosses the river.  The soldiers spot the canoes’ owners and a soldier playfully fires at them with blank rounds.  The locals return fire with real bullets, killing the commander and setting out on a hunt to wipe the entire squad out.  The squad struggles to escape as the swamp people pick them off one by one.

Between 1978 and 1987, Director Walter Hill made some of the best movies of his entire career.  Films like The Warriors, The Driver, Streets of Fire, and Extreme Prejudice are the results of this period.  Southern Comfort is Hill’s best movie to date and a genuine masterpiece of a film.  The movie is tense and claustrophobic, the barely-seen villains are terrifying and seemingly omnipresent.  Keith Carradine and Powers Booth give the performances of their career and the film only seems to become better with each viewing.  Southern Comfort has an abrupt ending, almost the exact same ending as Race With the Devil, but it doesn’t detract from the film as a whole.

Jim Halsey (C. Thomas Howell) is transporting a car to another state when he becomes drowsy in the middle of the night.  In an effort to keep himself awake, Jim decides to pick up a hitchhiker.  The man says his name is John Ryder (Rutger Hauer) and while he seems a bit bizarre at first he turns out to be completely psychotic.  Jim manages to push Ryder out of the car and saves his own life but this just encourages Ryder to follow him along the lonely desert highway framing him for gruesome crimes and pushing him toward an inevitable confrontation where he must kill or be killed.

The Hitcher is a cult masterpiece and anyone who hasn’t seen it should do so immediately.  Rutger Hauer gives the best performance of his career as the frighteningly calm serial killer.  Hauer’s first scene in the film remains one of the most frightening moments in movie history.  Robert Harmon directs a tight and terrifying thriller, bringing to life an exquisite screenplay by Eric Red.  The Hitcher is a movie about humans hunting humans that will stick with you forever when you see it.  Avoid the 2003 sequel with Jake Busey and the 2007 remake with Sean Bean.

Other Films About Humans Hunting Humans to Check Out