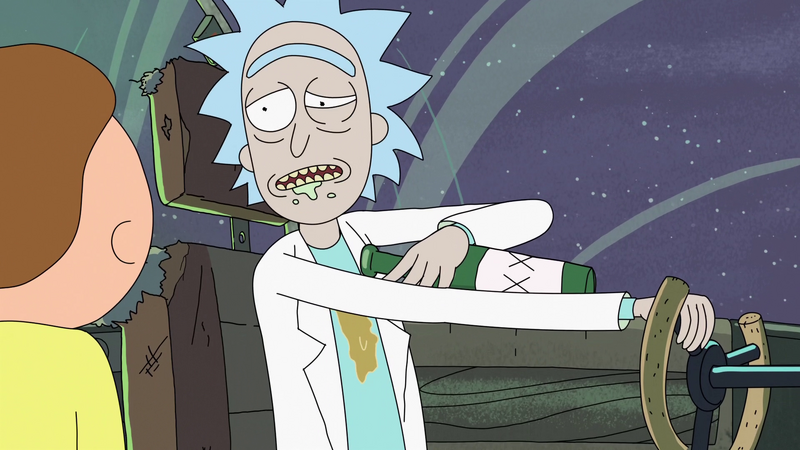 The 10 Rickest Ricks from ‘Rick and Morty’

For every dimension, there is a Rick. With so many Ricks to choose from how could we ever pick our favorites? Well, we did it anyway. Are you ready for a best-of list, bro? We’ve got the 10 (BURP) best Ricks from Rick and Morty coming right for your eye holes! From the one-and-only Rick C-137 to the group thinkers, the dummies, mutants, rebels, and the Ricks who are no longer with us, each plays an important role within the multiverse. “And away we go…”

Yeah, I know, this isn’t just one Rick, but let’s be honest, this council of group thinkers doesn’t even equal one Rick! They can’t even take down one measly rogue Rick without an entire government to back them up. The best part about this council is their sweet stellar hairdos and holier-than-thou attitudes. Unfortunately, they all meet their end in the Season 3 premiere “The Rickshank Rickdemption.”

Look over there at that idiot! Did you know he eats poop? Actually, that is a common misconception of Rick Sanchez J19ζ7, or more commonly known as Doofus Rick. He’s the kindest and gentlest Rick around but always seems to be the butt of the joke. No wonder he makes friends with Jerry in “Close Rick-counters of the Rick Kind.”

This Rick had to give his life for C-137 Rick and Morty to live on. We may only see this Rick briefly in “Rick Potion #9,” but he will forever be remembered. It is a travesty to think there was a Rick out there that just didn’t get the math right, but for our heroes, we all end up getting the better end of this slaughter.

If you take a droopy blog, a tentacle monster, and a Rick, then meld them together, you get a Cronenberg Rick. According to Justin Roiland, this monstrosity pays homage to some of the best practical monsters from director David Cronenberg’s ’80s cult classic The Fly and John Carpenter’s The Thing. It is a perfect piece of disgusting mutant that shows up at the end of “Rick Potion #9.”

Toxic Rick is made up of all the problems Rick deems to be negative about himself, including his entitlement, narcissism, crippling loneliness, and irrational attachments, especially toward Morty. In “Rest and Ricklaxation,” we see all of these aspects compounded together that most fans would say make a Rick in the first place.

In the Citadel of Ricks spin-off episode “The Ricklantis Mixup,” a revolt erupts in the Simple Rick factory. We see Rick J-22 lose his s**t when he is passed over for a promotion to Cool Rick. He straight-up goes postal, takes Simple Rick hostage, and really believes they are going to give him his freedom. He might be more Rick than all the other Ricks in the factory but he still gets duped in the end.

In the same episode, we follow Cop Rick who is partnered with a corrupt Cop Morty and the pair go on an adventure that is right out of Training Day. This classic good cop being introduced to the corrupt side of the law takes these two to Mortytown to bust a local Morty gang and then a shootout at a local hangout called The Creepy Morty. Cop Rick stands by his scruples the entire time and ends up winning out in the end. Rick is known for being a rebel and this time he rebelled by standing on the side of the law.

The original R.I.C.K.! He’s a scientist obsessed with Szechuan sauce, a reckless alcoholic, a sociopath, and the main protagonist we follow throughout Rick and Morty. There’s not much else to say about this Rick other than “wubba lubba dub-dub!”

Be careful the next time you turn over a pickle because you might just find Pickle Rick. This was definitely a highlight of Season 3 in the episode that bears the same name. When Rick turns himself into a pickle to get out of family therapy, he is left to his own devices and we see an entire episode following this version of Rick. His ingenuity is clearly on display to show his ability to find his way out of any “pickle.”

It’s Tiny Rick! In “Big Trouble in Little Sanchez,” Rick’s boredom gets the best of him when he transfers his consciousness into a tiny clone ready to get into some youthful hijinks with Summer and Morty. Tiny Rick is the epitome of what being a teenager is like. All that angst from stupid hormones and the constant self-induced personal hell makes for some great TV. This overconfident clone captured the hearts of Morty’s school and, really, the heart of every fan, only to finally be subdued by Elliot Smith and ultimately destroyed. He will forever live on in our hearts.

Each Rick puts his own stamp to put on Rick and Morty to take us on fantastical adventures in every episode. Yea we know we couldn’t name them all, I mean, there are infinite Ricks out there and who knows what Ricks we will see in the future?

Think you’re a real Rick and Morty fan? Find out how well you know the show with our interdimensional cable TV quiz.