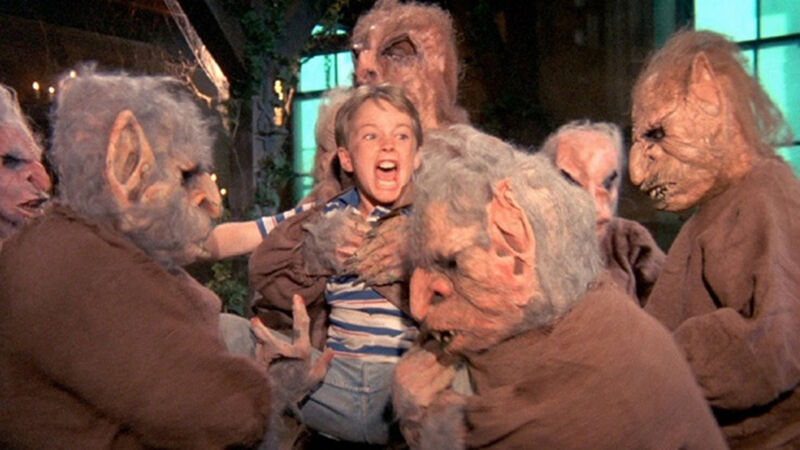 10 Worst Movie Monsters Ever To Appear on Screen

With a rebooted Godzilla franchise and a supersized King Kong back in play, not to mention a massive prehistoric shark igniting the box office over the summer, monster movies are big news once again. Yet here at FANDOM, we think it’s really important that we all never lose sight of the lesser appreciated ghouls and miscreations who’ve given us literally seconds of entertainment over the years. And so, with the news that Godzilla vs. Kong starts filming in October, we took a plunge into cinema’s dustbin, to celebrate the ten worst movie monsters of all time. Heads up: rubber will figure predominantly.

There’s an adorable family Christmas movie starring Michael Keaton called Jack Frost that came out in 1998. It concerned a dad, who, killed in a car crash, comes back to life in the form of a snowman in order to keep a watchful eye on his son. This isn’t that movie, but it’s fun to think of how much trouble dad must have been in when he’d got home from Blockbuster after renting the wrong film. In this Jack Frost, a serial killer is turned into a murderous snowman after crashing into a genetic research truck on his way to being executed. Later he crucifies an old woman on a Christmas tree. It’s that kind of film.

This 1950s horror holds the unique distinction of being probably the best movie ever made about a walking tree and one of the worst movies ever made, period. Essentially a movie about a guy who is killed by a witch doctor, who is then buried inside a tree, then reanimated via radiation as a sort of angry killer-sycamore (and you think you’ve had a bad day), the titular ‘it’ — here called Tabonga, or Baranga according to the trailer — was actually created by B-movie monster-making legend Paul Blaisdell. We reckon you could do better given a Sharpie and a few bin bags.

This B-movie horror literally features a man running around with a bin bag on his head, pretending to be a mutant jellyfish. Bizarrely, the film features about five minutes of groovy 60s’ teenagers dancing to the Neil Sedaka song, “Do The Jellyfish”. It’s the best bit of the movie, which tells you a lot.

The first Troll movie, released in 1986, was a pretty bad creature feature. But at least it had trolls in it. The sequel does not. Made under the working title, Goblins – the film being about a family pursued by vegetarian goblins — the film’s distributors were concerned the new property would fare poorly, so marketed it as a sequel to Troll, despite it having no link with that movie whatsoever. The movie’s extras were largely recruited from open casting calls. Many were bumped up to speaking roles. The store owner in it, Don Packard, was actually a patient at a nearby psychiatric hospital who turned up for a laugh. He’d also smoked a huge amount of marijuana on the day of filming and has said his “disturbed” performance really wasn’t him acting at all.

It’s no exaggeration to say, that without radiation, almost no monster movies would get made. Here it’s made your regular Pacific Island crabs into big monster crabs, but for some reason, also given them really sad, wrinkly faces, meaning they look quite a lot like Victor Meldrew from One Foot In The Grave, only made out of papier-mâché and with lots of legs. Impressively, director Roger Corman hides the monster’s failings with lots of tight shots. But then, you can put a bowler hat on a turd, and it still be a turd.

Starting with his work on An American Werewolf In London in 1981, special effects genius Rick Baker holds a record seven Oscars in the category of Best Makeup from 11 nominations in said category. But before that, there was Octaman, the first film he ever worked on. Basically a film about a man who is also an octopus – guess what, radiation is involved! – in truth, the monster is actually quite good. Silly, but quite good. It’s just it features in a movie that is far more boring than you ever thought a movie called Octaman could be.

Radiation? Check. People wearing alligator masks? Check. There’s not too much more to tell you about this entertaining monster movie beyond that. If there’s a major criticism of the movie, it’s that there’s no articulation in the costumes, meaning the film’s foes look more like they’re suffering from bad backs than they are being turned into alligators. B-movie fans will tell you that CGI stole the soul of monster movies, and they’d be right. But at least monsters can bend their limbs now.

Whether you believe in the alleged ‘true’ haunting of a house in Amityville, Long Island, New York in 1975 or not, the films said to be based on said events have always played loose with following the reported happenings. The fourth movie, however, really raises the bar. In it, the evil from the Amityville house is transmitted to a new location via a lamp. Yes. This is a horror movie about a possessed lamp. Picture the writer’s room. Imagine the moment that idea was said out loud. Do you think there were high-fives and then lunch? Who knows. Who knows.

Made by B-movie maven Del Tenney (who made a very fun zombie movie, also in 1964, called I Eat Your Skin, which we’d recommend a million times over this trash), you might think the 0% Rotten Tomatoes approval this beach party movie holds is harsh. And then you watch it. If you do watch it, try to explain to us why the monsters have in their mouths what can only be described as multiple flaccid penises, because frankly, we haven’t got a clue.

This movie has a Venusian creature whose design was directly influenced by serious thought applied to the logistics of its creation, by the director, Roger Corman. The director believed, that coming from a big planet like Venus, the creature would have to deal with heavy gravity and thus have a base close to the ground. Later, upon realising the monster looked like an eccentric bin, the director changed his mind. Reportedly, when the film’s star Beverly Garland first saw the monster, she said, “That conquered the world?” Then she kicked it over. Rude. At least it had some thought put into, um, it.