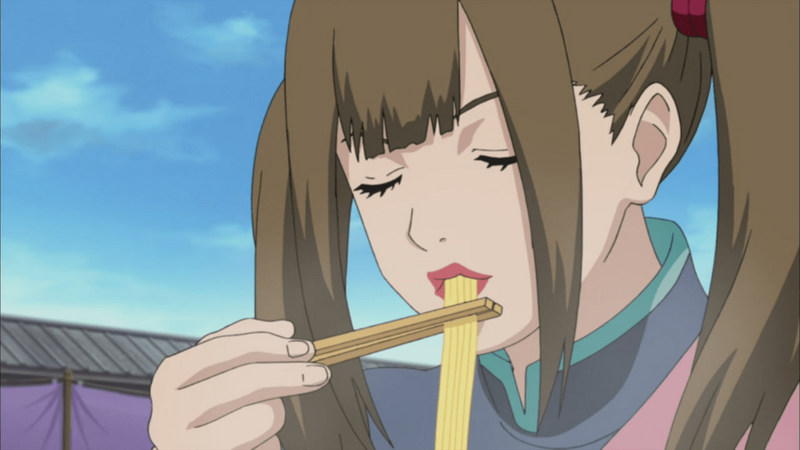 The amount of detail and attention that animators give to anime food can sometimes turn the lousiest nitpicker into an anime foodie. In almost every anime series or movie, we see the main character or yandere chowing down on a bowl of ramen or taking a bite out of a rice ball. With so many foods to choose from, what should an anime fan (or non-fan) try first? Here are 14 anime foods that will get you on your way to becoming a real anime foodie.

Not only did the flamboyant anime series, Yuri!!! on Ice bring us a non-traditional gay show, but it also featured some delicious treats. Every time Yuuri Katsuki wins, he’s allowed to eat this tasty dish. But, he continually breaks this rule. Wouldn’t you too? Katsudon is a heavenly mix of deep-fried pork cutlet, eggs, and rice. It’s too good for words.

Almost every comedy and romantic anime series has a perky little girl eating “taiyaki.” But just because it’s shaped like and looks like a fried fish, doesn’t mean it’s an actual fish. Taiyaki are pancakes, sometimes made from waffle batter, that are shaped like a fish and filled with something sweet like chocolate or red bean paste.

Although the origin of the fish shape is unknown, many suggest that taiyaki got its form based on the expensive sea bream. Thus, by molding this delicious treat as a sea bream, customers would feel like they were eating something extravagant.

At the beginning of Mugen, Jin, and Fuu’s weird and epic adventure in Samurai Champloo, the trio are looking for food. When they see a food stand along the road, they spend what little they have on “dango.” The spherical snacks are made from mochiko (rice flour), and they can be eaten year-round. So, if you are ever in Japan, you can go to a shopping center and find food stands selling these delicious treats.

Better known as a rice ball, onigiri is a quick snack made out of Japanese rice and often wrapped in seaweed. There are many ways to prepare the perfect onigiri — some opt to fill it with umeboshi (pickled plums), fish, jelly, or meat.

This easy snack can be found in almost every anime series. Onigiri was particularly controversial when it featured in Pokémon. The dub edit gave the snack a name that viewers outside of Japan would be more familiar with, such as ‘sandwiches’. However, after some backlash from fans, The Pokémon Company changed it to the more accurate ‘rice balls’.

Ramen is one of those foods that has taken on a life of its own. While many don’t know how ramen became such an instant hit with anime fans outside of Japan, it may be due to the popular long-running series Naruto. Ramen was not only seen as food, but also a symbol of friendship, family, and happiness. Japanese ramen is made of broth, noodles, and different toppings. If there’s one anime food that any foodie must try, it’s ramen!

While technically not a Japanese food, curry is consumed so often that it can be considered a national dish. The Japanese version is somewhat thicker and sweeter than its Indian counterpart. While curry can be served with rice, there are many people and, of course, anime characters, who give their own twisted version of this Indian dish, like Sebastian’s (from Black Butler) CHOCOLATE curry buns.

Pocky is a popular Japanese biscuit stick coated in chocolate. It comes in a wide range of flavors including strawberry, cookies and cream, melon, matcha green tea, and much more. So Pocky is the perfect snack to share with anyone, anytime, anywhere. A perfect example is Yomi and Kagura from Ga-Rei Zero who regularly share a box of Pocky as a symbol of their friendship. But, if you’re a real anime foodie you won’t share your Pocky with anyone.

Ramune is one of those soft drinks that you’ll need 007 anime foodie skills to drink. The marble inside seals the bottle, so the top of the bottle stays in place by the pressure of the carbonation in the glass. As a result, to open the bottle, you’ll need to push the marble inward, and if you fail to do so, you’ll get splashed similar to RahXephon‘s Ayato first attempt at trying ramune.

You can’t make an omelet without breaking a few eggs. Western cuisine influenced one of the most favorite anime foods to hit the screen. Omurice consists of an omelet made with fried rice and topped with ketchup making it the perfect comfort food. A perfect dish to share with your sweetheart like in The Garden of Words.

Miso soup is a must-try Japanese comfort food. This hot soup consists of dashi (a Japanese soup stock) in which you dissolve miso (a fermented bean paste), with bits of tofu, scallions and sometimes seaweed or kelp. Thus, it’s no surprise that companies like Marukome would release a series of heartfelt anime commercials that show how food can bring people together.

Takoyaki is the perfect snack for anime foodies who love seafood. The perfect way to make this ball-shaped Japanese snack is to fill them with minced or diced octopus (tako), deep fried flour-batter, pickled ginger, and green onions. Topping this delicious meal is a blend of sauce, shredded vegetables, and shavings of dried bonito fish.

In Assassination Classroom, Korosensei makes takoyaki with the octopus that Karma killed (as a powerplay move). He gives one to Karma, who immediately spits it out due to the spiciness. It’s a spicy reminder to anyone who’s burned themselves on this octopus dish.

A makiyakinabe is a rectangular cooking pan and is the must-have kitchen appliance for any anime foodie. The makiyakinabe is used to make these rolled and grilled omelets which are often seen at sushi restaurants. To make the perfect Japanese-style tamagoyaki, you’ll need to roll several layers of cooked eggs in a makiyakinabe. If you want to try to make it yourself and watch some anime, then take a look at Blood-C.

While breakfast may be the most important meal of the day, the course we look forward to most is dessert. Parfaits may not be traditionally Japanese, but they are the ultimate dessert in Japanese cuisine. A parfait not only consists of everything sweet that your taste buds can think of but they are also a treat for the eyes. If you’ve got a sweet tooth like Kyouko from Working!!, you will enjoy the perfect blend of ice cream, sweets, fruits and crunchy toppings that come only in a parfait glass.

The hamburger may feel like a quintessentially American food, but burger lovers exist all over the world — including some of your favorite anime. Key burger-featuring anime include Cowboy Bebop, Dragon Ball GT, Ranma 1/2, and One Piece. One interesting note about burgers in anime: They don’t just favor the traditional beef patty. Characters also chow down on katsu burgers, pork burgers, and more.

Looking for your own Japanese-inspired burger to fill you up? Try the new Tori Katsu Burger, available at KFC restaurants in Singapore. Order yours now.