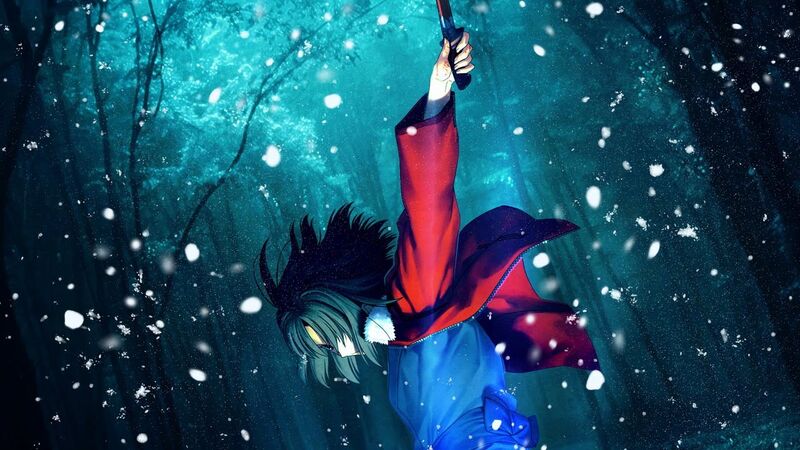 Halloween and blood go together like Jason Voorhees and Camp Crystal Lake. And while the aforementioned are pretty terrifying, the anime movies listed here will scare both the living daylights and nightlights out of you. Movies that stay with you after you’ve watched them are are a true hallmark of a great spooky anime. So, here are some anime movies that fans and non-fans alike should watch this Halloween.

Bio Hunter tells the story of a mysterious virus that spreads throughout Japan and turns those affected into uncontrollable demons with a taste for human flesh. Two scientists attempt to distribute a cure, but unfortunately, one of them gets infected. Now it’s a race against time, as he not only tries to control his demon side but also to save those closest to him.

This horror anime movie has everything you could want for Halloween — it’s mysterious, intense, and utterly terrifying.

Vampire Hunter D: Bloodlust follows D, the infamous “dhampir” and renowned vampire hunter. Half human and half demon, D strikes fear into the hearts of many. Luckily, his sweet vampire-hunting skills gain him acceptance among the mortals. Chronicling his quest to rid the world of nobility, D is asked by the Elbourne family to rescue their daughter Charlotte from the vampire, Meier Link. However, saving the lovely Charlotte becomes more complicated than anticipated as she has fallen in love with her kidnapper.

Vampire Hunter D is the perfect anime movie to start off your spooky weekend. The film’s plot may not be that captivating, but its fight scenes and blood splatter make it a must-see.

The short film, Kakurenbo: Hide & Seek, follows a group of children playing Otokoyo (hide and seek) among the ruins of the city. However, this innocent game quickly turns into a nightmare as the children start disappearing, one by one.

While Kakurenbo may not be the blood-fest most often associated with Halloween, the movie does an excellent job of keeping you on the edge of your seat. Kakurenbo is all about the gripping mystery surrounding the missing children. At only 25-minutes long, it’s a perfect in-between film while you wait for your takeout.

Serving as a prequel to the live-action South Korean zombie film Train to Busan, Seoul Station follows a group of people trying to survive a zombie apocalypse in downtown Seoul. When his daughter runs away, her father, Suk-gyu, tries to track her down. But there’s a huge problem, the city’s citizens are turning into zombies one by one. Will Suk-gyu be able to locate his daughter, and will she still be the person he once knew?

The straightforward South Korean anime movie is perfect if you love zombie movies. It’s also a great way to kick off the Halloween season before diving into the live-action stuff.

When the pandemic “Medusa” spread throughout the world, there was no cure in sight. So, a biotechnology firm called Venus Gate offered an unlikely solution to humankind — freeze sleeping. The company chooses 160 people to put into a cold sleep in hopes of finding a future cure.

Kasumi, a teenage girl and one of the 160 selected for the procedure, is guided to a Cold Sleep Capsule Center (CSCC) inside an ancient castle. She falls asleep anticipating a reunion with her twin sister, Shizuku, in the future. However, when Kasumi and the others awaken, they notice that the CSCC is not as they remembered. Just like the story of Sleeping Beauty, the castle is covered with thorns, and unknown creatures attack those who have awakened.

Halloween is not all about zombies and blood. It’s also about mysteries and suspense — something King of Thorn defintiely has. The anime’s half-truths will have you questioning everything until the final scene. But, don’t get too hung up on the thriller stuff. It also includes some great bloody scenes.

The Empire of Corpses

The Empire of Corpses is based on the late author Project Itoh’s (real name Satoshi Itō) posthumous novel of the same name. The film centers around the story of Victor Frankenstein bringing the dead back to life. The world has started using human corpses with no souls in them for tedious work.

John Watson (from the Sherlock Holmes stories) is a medical student at the University of London who illegally studies the missing soul in corpses, with the help of Friday. The British government catches onto Watson and recruits him to join the search for the legendary writing, “Victor’s Notes,” which details the creation of the first and only corpse with a soul.

The Empire of Corpses is a steampunk necromancy homage to Victor Frankenstein and his monster. The anime film’s captivating action-adventure story puts a new spin on an old and worn-out genre.

Mima’s life is turned upside-down after leaving the pop idol group “CHAM!” to pursue an acting career. But one of her hardcore fans, Me-Mania, is less than happy about her new career path.

Despite her manager’s warning, Mima accepts a role that is far from her idol persona. While on set, strange things begin to happen to people who are involved with the movie. As time goes on, Mima starts to break down mentally, struggling to distinguish fantasy from reality.

If you are a fan of Black Swan or Requiem for a Dream, you will definitely love Perfect Blue. Director Darren Aronofsky reportedly bought the rights for Perfect Blue and drew inspiration from the film while making Black Swan. In fact, he even lifted several scenes from the anime movie.

The Garden of Sinners

The Garden of Sinners is a seven-part movie series chronicling the life of the knife-wielding Shiki Ryougi and her classmate Mikiya Kokutou. Despite each movie having its own plot, the underlying story focuses on the relationship between Shiki and Mikiya.

The anime movies deal with the paranormal and explore mature themes like suicide, rape, patricide, incest, and murder. However, one film that particularly sticks out is Paradox Spiral which follows the strange happenings at an apartment complex. But for an intense Halloween weekend, you could just marathon them all.

If you’re only interested in blood and gore, then this 48-minute anime movie is perfect for you. Directed by Hiroyuki Kitakubo (Ghost in the Shell), Blood: The Last Vampire takes place in Japan during the ’60s and follows Saya whose sole mission is to kill Teropterids, or monsters who drink blood.

Blood: The Last Vampire was the film that launched the entire Blood franchise. So if the short horror anime film isn’t enough to quench your vampire thirst this Halloween, there’s always the 50-episode Blood+ anime series that’s set in an alternate universe.

Lily C.A.T. skillfully combines space movie classics, gore, and a cat. Set in the distant future where space travel is possible thanks to deep sleep capsule technology that slows the aging process. The deep-space cruiser Saldes’ crew wake up after a 20-year stint in space, and, naturally, encounter a disaster, as alien bacteria has gotten into the ventilation system. Soon, their exploratory space mission quickly turns into a fight for survival.

This isn’t exactly the greatest horror anime movie out there. In fact, it’s actually quite cheesy. Lily C.A.T. is ripe with clichés and features the subpar dubbing associated with anime of the late ’80s. But, if you want to relax on your couch and watch a cat do horrific things, then you must check out this film.

Warning: This movie uses tentacles in a promiscuous manner.

From the director of Vampire Hunter D: Bloodlust and Ninja Scroll, comes the ’80s horror anime movie Wicked City. There are two types of worlds, the human world and the Black World, a dimension that few people know about. For hundreds of years, a pact existed between the two dimensions for peace and harmony to exist on both sides.

However, when it’s time to renew the pact, a militant group disrupts the signing, preventing the interdimensional agreement. Now, two mismatched agents — one from each world — must work together and fight demons to ensure the success of the accord.

Wicked City, features several iconic anime tropes that have negatively stereotyped anime in the West. But, besides this horrible categorization, the film does feature plenty of action, romance, and, of course, some blood and guts.

The beautiful island of Okinawa is taken over by a horde of walking fishes that are leaving the ocean and heading to the cities. Amid this crisis, a girl named Kaori loses contact with her boyfriend Tadashi, who lives in Tokyo. Desperate to find out what happened to him, she heads to Tokyo. But, she quickly realizes that this will be a challenge as Japan’s capital has been taken over by the fish and their revolting stink.

Not only do the bizarre-looking fish in Gyo take over the land, but also giant great white sharks. So imagine a giant white shark chasing you down the street. The horror sci-fi anime movie may sound weird, but it’s well worth putting in the Halloween rotation this year.

Unlike the live-action films, the Resident Evil CG anime movies are set within the same canon universe as the original video games. On top of that, it takes place several years after the Raccoon City incident.

Just like in the games, in Resident Evil: Degeneration you never know when a zombie will pop out and take a bite out of you. The film follows Leon S. Kennedy and Claire Redfield as they battle a rogue warrior and a mutated monster on a rampage.

You might not be able to take the fight into your own hands with a controller, but these immersive films are sure to hold your attention from beginning to end.