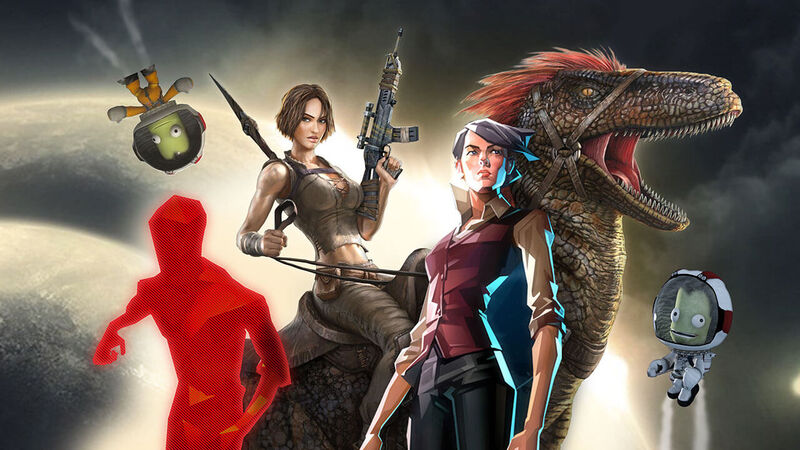 So, you just picked up a brand-new Alienware Steam Machine, and are itching to try out the latest and greatest games and put your new rig through its paces. Fandom has got you covered. We’ve combed through the Steam Store to find a varied selection of the best games on SteamOS that are high on both entertainment and on value.

For Those in It for the Long Haul

If you have ever wanted to get in the cab of an 18-wheeler, turn on your favorite playlist, and just drive, American Truck Simulator is the perfect game for you. The game takes you out on the roads of California and Nevada as you take a variety of jobs to try to eventually build up your own multi-million dollar logistics company. CB Radio and awesome trucker handle are optional, but encouraged.

While survival games with crafting mechanics are everywhere these days, only Ark: Survival Evolved offers a combination of crafting, survival, action, and dinosaurs. As if survival games weren’t tough enough without giant man-eating dinosaurs chasing you around. At least you get to ride some of the dinosaurs to make a quick escape.


If you are into Metroidvania-style games, Axiom Verge is one of the best recent games in the genre. Featuring a distinct futuristic pixelated art style, tons of exploration and secrets to uncover across nine labyrinthine areas, and over 60 items and weapons woth which to experiment, this one will keep you busy for quite some time.


If you long for the days of testosterone infused, hypermasculine ‘80s action movies and heroes whose definition of exposition is a quick one-liner delivered after ridding the world of the bad guys, you will love Broforce. The game’s over-the-top style and old school gameplay are a throwback to a simpler time, when action games pretty much had one objective: Blow stuff up.


If you have ever been driving home, and thought to yourself that the traffic lights could be timed better, or that things in your city would be so much better if only you were in charge, then now is your chance to prove it with Cities: Skylines. This city-building simulation game lets you control every aspect of running a city, from assessing taxes to zoning.


Before Crypt of the Necrodancer came along, it would have been hard to imagine that the combination of a roguelike dungeon crawler and a rhythm game could work so well together. In fact, imagining such a combination at all seems outlandish. Which makes it even more remarkable that Crypt of the Necrodancer not only makes it all work, but manages to do so in style. The game supports the use of dance pads, as well as gamepads or a mouse and keyboard, so you have a variety of ways to get down to one of the best game soundtracks in years.


Divinity: Original Sin takes the classic gameplay of Baldur’s Gate-style CRPGs and modernizes the genre. While it retains the classic turn-based combat of that style of game, it adds things like co-op multiplayer, an interactive world that gives you a great deal of freedom to explore and approach problems in unique ways, and a full set of modding and editing tools that allow you to create your own adventures and publish them online. The Enhanced Edition adds new content and an expanded storyline, improving upon an already excellent game.


Firewatch is a “walking simulator” that takes place in the wilderness of Wyoming. The player takes on the role of a fire lookout that must explore their surroundings to get the bottom of a series of mysterious events. The game gets high marks for its story and character development, as well as its serene visuals, which can be captured using the in-game photo system.


Invisible, Inc. is a turn-based tactical roguelike with an additional emphasis placed on stealth. It all comes together to form a unique and stylish package that is unlike any other game in the genre.


Kerbal Space Program is a space flight simulator that gives you a set of tools, then asks you to direct your own space program with the goal of ultimately launching your own spacecraft into orbit. To do so, you will have to be both extremely creative, and extremely patient, as the game can be challenging at times. However, that challenge pays off as you experience a real sense of accomplishment from successfully completing missions and goals.


As we previously noted in our analysis of the game, Layers of Fear is a terrifying, and compelling experience. It relies more on psychological horror than cheap jump scares, which makes it even more effective in getting under your skin and creating longer-lasting scares that stick with you.


Nuclear Throne is a top-down shooter roguelike that lets you choose one of 14 unique characters to fight off waves of enemies. The game sets itself apart from similar games with its use of a unique mutation character leveling system, which lets you choose an upgrade from four randomly generated mutations. This adds replayability to the game, and ensures no two playthroughs will be the same.


The Shadowrun universe has always been intriguing, with its mix of noir storytelling, cyperpunk, and magic. Shadowrun: Hong Kong is the follow-up to Shadowrun Returns and its standalone expansion, Shadowrun Dragonfall. It uses the same turn-based tactical gameplay of those games, and adds a new single-player campaign in an all-new setting.


SOMA is a science fiction survival horror game that combines psychological scares with thoughtful writing and themes that explore the nature of humanity, consciousness, and the soul. The game is another walking simulator that relies on exploration and environmental storytelling to add to the mood and atmosphere of the game, as well as move the plot forward. Moving forward is something you will want to keep doing, as the game doesn’t allow you to fight its many monsters, and you will need to avoid many of its roaming creates through puzzle solving and stealth.


SUPERHOT may look like a first-person shooter, but behind its shooter façade and minimalist art style lies a deceptively complex puzzle game that requires you to manipulate time in order to avoid enemy bullets and figure out the best way to outmaneuver them and line up the perfect shot.