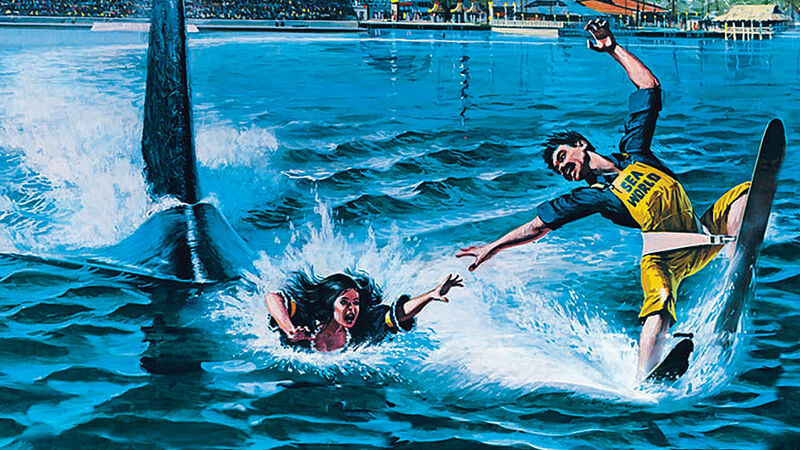 The Jaws 3 VHS at my childhood Blockbuster Video was pretty crummy. Jaws 3 isn’t good looking to begin with, but that copy no doubt suffered due to its but regular rotation in my family’s VCR. I remember composer Alan Parker’s riff on the classic Jaws theme warbling and dipping as I adjusted the tracking. I remember the dimly lit night scenes and underwater sequences looking blurred and dull to the point of near-incoherence. But I was a kid, and I didn’t mind.

Jaws 3 looks much better now. Not because the years have been kind to the film, but because Universal just released the film on Blu-ray for the first time. I had seen the film so many times, but never as intended: in its proper 2.35:1 aspect ratio, and in 3D. This new Blu-ray changed that by providing the 3D version of the film (under its original title: Jaws 3D) as a bonus feature. For the first time, this fan could see the movie in a way that at least attempted to match the theatrical experience.

And I’m pleased to say that Jaws 3D is a slightly better movie than Jaws 3. Even from the opening titles, it’s apparent you’re in for something that makes more sense than the flat version so many of us grew up with. The neon red titles pop against the blues of a coral reef, shot in real 3D. Reef fish dart in and out of the frame, enveloping you. The effect is a gimmick, but it’s undeniably striking. The added depth, in moments like this, heightens the reality of this very silly movie.

The film’s premise involves the two children of Amity Police Chief Martin Brody all grown up. They’re spending time together at SeaWorld, which for narrative purposes has been moved to Florida’s Atlantic coast. The theme park setting invites a lot of gimmick shots in the film, where some long pokey thing juts obscenely out of the screen toward the viewer. The 3D effect is uncomfortably strong in these close-ups, which aren’t there to support the narrative — only to keep the gimmick present. It’s in the smaller moments, the more mundane bits you don’t think of as “3D shots” that improve the film.

For instance, when Lea Thompson’s character water-skis in the movie’s opening, the 3D effect deepens the image, making the skier formations feel all the more impressive. The effect isn’t cranked to the extreme in this sequence, so it adds some polish to the shot compositions that is not present when flattened into 2D. So from a purely visual standpoint, sequences like this make more sense. The leering menace in shots of the water-skiers’ legs and skis dangling below the surface is enhanced.

But in the hugely expensive underwater set pieces, the film and the 3D effect both suffer. When a character is attacked earlier in the movie, his severed arm floats motionless in the water, a spike of bare humerus threatening to take your eye out. The arm was shot separately from the underwater background and composited in, and that’s where many of the film’s effects issues lie: in compositing. The dinky miniature sharks, submarines, and underwater sets are poorly detailed and even more poorly photographed. The compositing is even worse — nearly every composited element has a Sharpie-thick black line around it.

Released in the same year as Return of the Jedi, Jaws 3D makes it clear what having a good effects team meant for your movie. None of the miniature or composited effects play well with the 3D of the film. Instead, the best 3D effects in the film aren’t what you might think. Silent close-ups of Louis Gossett, Jr. looking anxious, or oceanic vistas take on new dimension and life. Good closeups on people work can work really well in 3D — the emotion is more present, and the argument for using 3D seriously rears its head.

Jaws 3D maybe more forgivable as a gimmick event film. It’d be a much more impactful and dare I say important film if the effects were great. Instead, we get a badly conceived story full of poorly built conflict, unimportant characters, and mismanaged moments. The dynamic between the two Brody brothers (Dennis Quaid and John Putch) is thin. That dynamic is abandoned halfway through when Sean, the younger Brody brother, decides he’d rather not be in the movie anymore.

The film’s central romance shows signs of life but reaches a weak resolution in a scene that would’ve fit better at the end. Dennis Quaid’s Mike Brody is a complete blockhead who doesn’t know the difference between fish and mammals. He gets a few interesting and fun moments that inform his blue-collar-nice-guy core. (In one scene, he holds a dog’s floppy ears out of a water bowl. It’s cute.)

Mike’s biologist/whale trainer girlfriend, Kay (Bess Armstrong), is given one of the film’s few moments that border on real emotion. When a 10-foot great white shark dies in captivity after being placed on exhibit without her consent, her panic, anger, and sadness really come across. But moments like this are steamrolled by a dreadful supporting cast and a stupid streak a mile wide. The film’s big mama shark chews a dude like a Starburst candy, and the scene is shot from inside the shark’s mouth. The same shark manages to park itself in a large intake pipe. Don’t worry — it manages to back itself out later (twice, in fact). You can practically hear the “beep beep beep” of a garbage truck as the damn thing inches backward.

There are still a few bright spots. Gossett, Jr. gets his share of choice lines (“Chu talkin’ bout some damn shark’s mutha!?”), and there’s a funny moment when a flock of kids ravenously swoops in on a mound of spilled popcorn. But after years of putting the film in the dark cupboard of my mind, I see why critics and audiences trashed the film: it’s just bad filmmaking. There is a blatant misunderstanding of action, staging, and rhythm. It is a corny and vacuous sequel that only manages to be funny when it isn’t trying.

But loving Jaws 3 (and movies like it) when I was a kid helped inform my tastes today. It helped me gain an appreciation for trash cinema, which is a valuable thing to have when you see as many movies as I do. And as a Jaws fan, I’m grateful that Universal has allowed us to see what this widely reviled film looked like when the public saw it back in ’83. They’ve done the film and the fans a big favor, even if time and distance have confirmed that Jaws 3D mostly deserves its reputation.