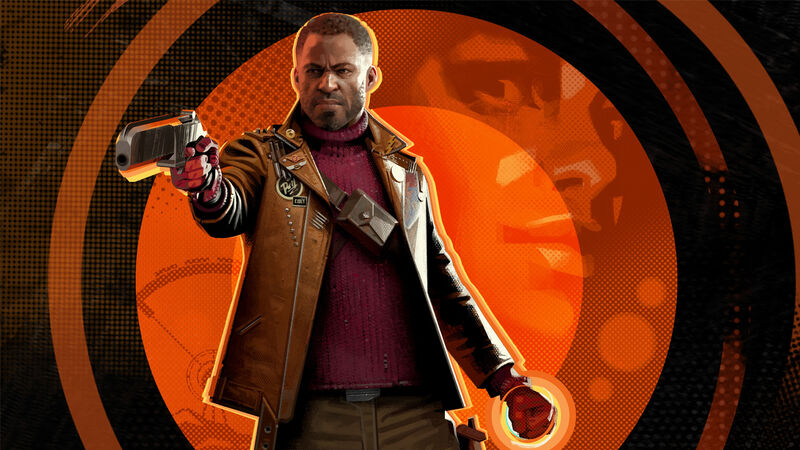 5 Reasons to Check Out DEATHLOOP

Nobody does first-person shooters quite like Arkane Studios. The France-based developer, a subsidiary of RPG behemoth Bethesda, is gearing up to release DEATHLOOP, the latest in their canon of innovative and spritely first-person experiences. Though initial gameplay might have you fooled, Dishonored 3 this is not— DEATHLOOP truly looks set to breathe some fresh air into a genre swamped with annual releases, microtransactions, and season passes. After teases, developer interviews and a pandemic-induced delay from its initial May release date, Arkane are finally set on unleashing DEATHLOOP to the world in the coming months. Today, we’re running down five reasons why DEATHLOOP absolutely has to be on your radar when it comes out on September 14.

Take the classic caper Groundhog Day, mixed with the targeted violence of the Assassin’s Creed franchise, and you’re somewhere near the premise of DEATHLOOP. While Bill Murray’s sardonic Phil woke up with every day the same, DEATHLOOP’s Colt faces quite the opposite—when he dies, everything goes back to square one. Set on the sandy, cyberpunk-infused island of Blackreef, the game can become an endless onslaught of shooting, parkour and stealth… which will go right back to the start if you take a wrong step.

Colt is no faceless, bland assassin; his mission is a personal one. His job is to take out eight Visionaries, whose powers allow them to keep Blackreef’s endless time-loop in check. To break the chain and bring normality back to the former military base-turned-island, those Visionaries need to die. The premise is evocative of Ubisoft’s original Assassin’s Creed from 2007, with Altaïr killing nine targets to reinstate his status within the Creed. While killing is the aim, the time-hopping nature of DEATHLOOP will ensure the concept stays fresh. Mess up a kill and the Visionaries will restart the loop, sending you all the way back to square one. Their control over Blackreef is strong enough that they’ll taunt you with messages on buildings or neon signs—meaning they’re pretty all-encompassing opponents. Pitting one lone assassin against a bevy of time-manipulating baddies sounds like an ambitious task, but it’s the only way to save Blackreef from remaining trapped in its vortex of infinite repetition.

2. Step aside Spider-Man, Colt has arrived

Of course, no task as laborious as killing eight time-melding titans is possible without a little bit of supernatural aid. Luckily, Colt is more than a gun-toting brute, and his eclectic range of Skyrim-esque powers will help level the playing field just a little bit. The devs at Arkane are playing their cards very close to their chest in terms of revealing the magical abilities you’ll have, but what we do know so far is very exciting.

The main ability we’ve seen is Karnesis, a unique spell where Colt can propel enemies into the air. While it may sound a little like the Force, it actually changes the gameplay DNA within DEATHLOOP. Previous Arkane games like Dishonored have always given players the chance to tailor their kills to their chosen playstyle, going in loud and proud, taking enemies out silently— or even completing the game without a single kill. Of course, the latter option isn’t a choice in DEATHLOOP, as somebody needs to take out those Visionaries for good. Abilities like Karnesis, however, ensure you can handle opponents exactly how you want. Fancy tossing a gun-wielding grunt off the edge of a snowy mountain, to their frost-ridden doom? Go ahead. Or would you rather propel them across a room, giving them a moment to regain their composure before blasting them to oblivion? Karnesis will let you do that, too. Its beauty is in how you can employ it exactly how you want, making DEATHLOOP a veritable assassination sandbox. You can throw around objects too, which adds another layer to the fun—tossing crates or barrels into unsuspecting adversaries, like a gun-toting, time-hopping Jedi.

Of course, there’s plenty of other abilities too, which used together can make Colt an unstoppable assassination machine. Shift lets you dash across the arena in a split-second, à la Miles Morales. This also works for grappling up to vantage points or hanging on ceiling-bound chandeliers. It adds a totally new veneer of verticality to the game, where areas aren’t just shooting galleries to mow down enemies, but playrooms to experiment, think outside the box, and tailor the action to your liking. There’s also Nexus, which links a group of grunts into one single consciousness—meaning if you blast one of them, they’re all going down. It’s like a game of dominos, but with a lethal, bloodthirsty assassin at the helm. DEATHLOOP’s replayability will come from the variety of its abilities, letting you toy around with new ways to take out enemies.

Despite his supernatural abilities, you can’t expect Colt to kill all these enemies without a bit of firepower, can you? As an assassin by trade, our hero has a range of exciting and varied weapons at his disposal. Our highlight is the PT-6 Spiker, a gun where you chuck a handful of nails into the chamber, then fire out a barrage of spiky projectiles. While it looks like your conventional handgun, its ability to rattle out nails makes it a gun to look out for in Blackreef. You could even use it on a Karnesis-affected enemy floating in mid-air—and that would be the exact kind of self-made spectacle that DEATHLOOP lets you create.

Of course, Arkane is making sure that nearly every weapon is as nuanced as the Spiker. In a recent gameplay preview at PlayStation State of Play, we got a glimpse at dual-wield SMGs, chunky shotguns, and grenades that stick to walls and detonate at you command. But fear not—if you run out of ammo, Colt’s melee abilities have got your back. He can wield a particularly sharp knife to slash enemies to death, or, as seen in new footage, he can even snap an enemy’s neck 180-degrees backwards. It’s like something out of The Exorcist, except it’s all in your power.

While previous Arkane Games like Dishonored and Prey haven’t exactly been fabled by the nuance of their protagonist, DEATHLOOP looks set to change that with Colt. Voiced by Jason E. Kelley, he exudes personality, and seems to have a quip for every situation. Colt is as happy using a remote bomb as dropping an F-bomb, and it all complements the colorful, bubbly atmosphere DEATHLOOP creates. He’s an enigma too, as we have no idea where he comes from, or how he ended up trapped in a loop on the rocky Blackreef shores. Like something out of a comedy, he’s the only one not caught up in the Visionaries’ spell over the island’s inhabitants, able to see through their deception and take them down. He’s a character just as baffled at the game’s insane concept as you are, which makes his one-liners even more biting.

But if Colt is the witty, charismatic hero, then Julianna, voiced by Ozioma Akagha, is the opposite side of the same coin. An assassin just like Colt, her mission is the reverse of his: to kill Colt and preserve the Visionaries’ time loop. While he sees his duty as restoring time to Blackreef, she’s committed to maintaining the status quo, and it sets up a thrilling cat-and-mouse dynamic to unfold. Arkane is purposefully playing their cards very close to their chest with Julianna—we don’t know nearly as much about her as we do Colt, and we’ve got no insight into why she’s so indebted to the Visionaries. You can guarantee that as the game goes on, Julianna will prove quite the adversary. Almost like Mr. X in Resident Evil 2, she’s perpetually present during Colt’s quest, tracking him, taunting him over voice comms, and taking shots at him when she can. You’ll never get a moment to relax in DEATHLOOP, as Julianna will always be breathing down your neck. But if we know Colt, there’s one way he’ll handle her: with an endless reel of expletive-laden one-liners. Maybe even some gunpowder, too.

Perhaps the most exciting concept within DEATHLOOP is how it handles multiplayer. Call of Duty this is not—you won’t be able to access a separate mode and team up with friends to blast other players, or handle yourself in a horde mode. Instead, it goes down the line of something like Watch Dogs, with an integrated multiplayer system that can totally throw off your progress, and turn your game on its head.

In the options menu, you’ll be able to open your story mode to the multiplayer component or turn it off. If you opt in, it means another player will control Julianna during the game, hunting you down and attempting to sabotage your progress by killing you. It’s like the grief-killing basis of Grand Theft Auto Online, if dying set you back to the start of the mission. Not only does it ramp up the tension hugely, but it means you’ll always have to watch your back, as your friends masquerading as Julianna could blast you at any given moment. Of course, you’ll be able to do the same as well, and there isn’t a feeling as sweet as taking out your unsuspecting friend to hamper their Visionary-killing quest. Sadly, your game’s Julianna won’t be able to switch allegiances and team up with you, as game director Dinga Bakaba confirmed in April that a co-op playthrough of DEATHLOOP isn’t a possibility. Nonetheless, competitive friend groups will relish the chance to wipe out hours’ worth of story progress—and the ensuing rage from the felled Colt player will make the experience even more rewarding.

There you have it: five reasons why Arkane Lyon’s DEATHLOOP looks set to storm the gaming landscape when it releases later this year. In a period where PS5 owners have already been treated to top-quality console exclusives like Returnal and Ratchet & Clank: Rift Apart, and DEATHLOOP looks like it’ll continue that trend. If you haven’t managed to get your hands on Sony’s latest hardware, then fear not, as it’ll be releasing on PC at the same time. There’s no previous-gen ports for DEATHLOOP but since it’s only a timed console exclusive, Xbox Series X|S players will be able to try out the game a year after its initial launch.

The game’s beauty is in how much about it we’ve still got left to uncover. We’ve seen some of the wacky abilities and weapons – but Arkane are certainly keeping the best surprises up their sleeve. Equally, the Groundhog Day-esque plot is an enigma within itself, that raises so many questions. What happens when all the Visionaries are dead? Will the loop just automatically reset itself? Will we ever find out Colt’s backstory? And how do the Visionaries have such an endless supply of grunts for you to massacre?

We’ll find out the answers to all this and more, when DEATHLOOP launches on PS5 and PC on September 14, 2021. After months of delays and speculation, Arkane’s latest game is finally in sight – and it couldn’t be a more exciting prospect.

Luke Hinton
Lukeh38
Luke Hinton is a freelance culture journalist living in Cardiff, Wales. He graduated from Cardiff University with a degree in Journalism, Media and Communications, and currently balances his freelancing work with postgraduate studies. He specialises in film, TV and entertainment writing.