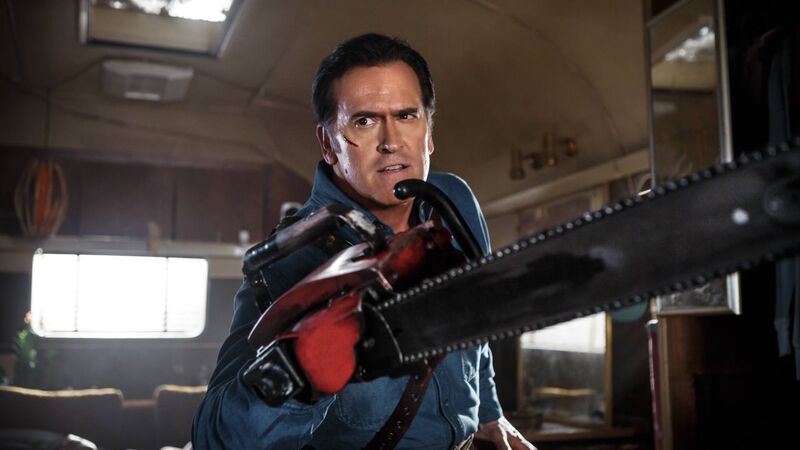 5 Reasons You Should Watch ‘Ash vs. Evil Dead’ Season 2

Ash Williams (Bruce Campbell) is back in the second season of Ash vs Evil Dead — available now exclusively to Virgin TV customers On Demand in Box Sets — that follows a middle-aged Ash and introduces a new cast of characters. If you’re not watching Ash vs Evil Dead, go binge-watch season one immediately. Still need some convincing? Here are five more reasons you should watch Ash vs Evil Dead Season 2:

This show could have been reimagined with a sexy young cast with a heartthrob of the moment playing Ash, but that show would have been a flop. No one could dare wield the chainsaw and boomstick except for Bruce Campbell and the creators know that. Sam Raimi lets Campbell bring our lovable anti-hero Ash Williams back to life by doing what he does best. Sure Ash is a little older and slower being in his late 50s now, but the show explores this in the funniest way possible. Hey, even icons gotta age.

A New Cast of Characters

Nearly every character from the original Evil Dead movies is dead, so it was important to expand the universe with sidekicks up to the task of helping our hero save the world.

The unlucky duo sucked into Ash’s world are his coworkers from Value Stop, a discount retail chain. Pablo Simon Bolivar (Ray Santiago) is as sweet and affable as they come and adoringly refers to Ash as “El Jefe”. Pablo’s innocent nature is in full contrast with the world he’s thrown into and it’s fun to see him engage in some gnarly kills. Kelly Maxwell (Dana DeLorenzo) rounds out the three with a take-no-prisoners attitude and quickly racks up quite the demon body count. Both characters are well-rounded and help bring out the best in Ash.

Lucy Freaking Lawless, the queen of camp herself returns for the second season as Ruby. As the first season’s major antagonist, Ruby blamed Ash for her family’s death and wanted him dead. Without giving away too much, Ruby’s true nature was revealed in last season’s penultimate episode and now she reluctantly teams up with Ash & co. This marks Lawless and Campbell’s first collaboration since their Xena: Warrior Princess days.

Perhaps the most buzzed addition to the cast is Lee Majors (Six Million Dollar Man) as Ash’s asshole father Brock Williams. As Ash returns to his hometown (a fictional) Elk Grove, Michigan, we get to see some major Williams’ family dysfunction as well as a good look into Ash’s past.

It wouldn’t be The Evil Dead if it wasn’t nasty as hell. For fans worried the gore from the movies wouldn’t be possible in a series format, let me ease your fears. We’re talking decapitations, intestines, vomit, snot, and even feces, yes feces.

This show is not for the faint of heart and as the series progresses the more creative the carnage gets. We’re surely in for a gory treat with Season 2.

With reboots and nostalgia being at an all-time high these days, Ash vs Evil Dead is always throwing little nods to the original films. This season fans will get a most welcome blast from the past in the form of Cheryl.

That’s right Ellen Sandweiss herself will be returning for a small cameo in the role that made her a pop-culture mainstay. As Ash’s doomed sister in the original film, Cheryl takes the brunt of the abuse of the group. She gets attacked by the trees, is the first to become a deadite, locked in the cellar, and is even shot in the face, eventually she is killed by her brother Ash. It is assumed that she will be in deadite form as she appears this season. Whether it’s in flashback form, a nightmare, or something else isn’t clear just yet, but with Ash returning home it only makes sense that Cheryl will be a looming presence.

Another welcome addition to the cast is Ted Raimi, (yes, Sam’s younger brother) appearing in all three Evil Dead movies and often collaborating with Campbell, this just feels right. Raimi will play Ash’s childhood best friend Chet Kaminski, a loveable burnout that never did anything with his life. With nearly 40 years of friendship with Campbell in real life, their on-screen chemistry is undeniable. Who knows what other nostalgic cameos the show has in store, but discovering them is part of the ride and a huge gift to the fans.

Joel Tobeck (Sons of Anarchy, The Lord of the Rings: The Return of the King) joins Season two as the new big bad. He plays a particularly nasty demon named Baal. Not much is known about Baal yet, but he has a secret connection to Ruby and will prove to be the most powerful enemy Ash has faced to date. And let’s be real, Ash has faced some pretty heinous evil in his day.

With season one earning a whopping 98% Fresh score on Rotten Tomatoes, the second season has some mighty big shoes to feel. With the gore at an all-time high and kills that put The Walking Dead to shame, we have a feeling this will be the grooviest season yet. Season 2 available exclusively now to Virgin TV customers On Demand in Box Sets.

Available exclusively now to Virgin TV customers On Demand in Box Sets. The TV you love, brilliantly brought together. Find out more at virginmedia.com/virgintv.