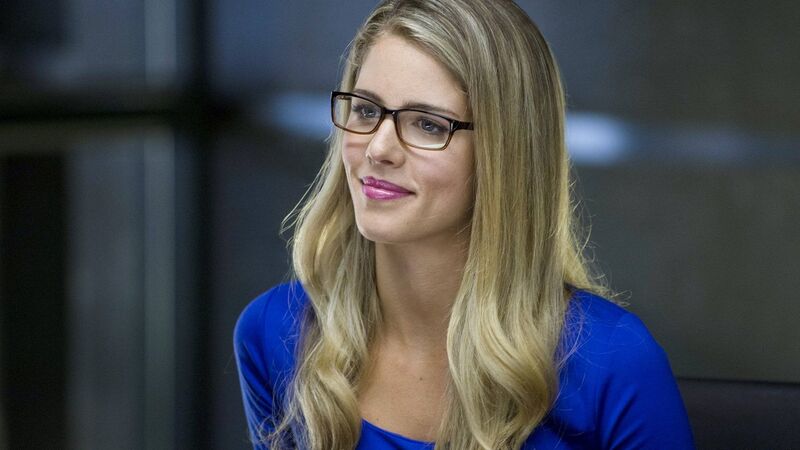 Felicity Smoak (played by Emily Bett Rickards) has been a key member of Team Arrow since Arrow‘s second season. Alongside Oliver Queen and John Diggle, Felicity has been essential to the protection of Star City over the years as Overwatch and has saved many of her fellow team members countless times thanks to her intelligence, creativity, and tech skills.

Although Felicity has been one of Arrow’s main characters for years, she unfortunately hasn’t always received the storylines she deserves. This disappointing trend continued in Arrow Season 6, as Felicity was relegated to a supporting player who, despite developing her own relationship with William, mostly served Oliver’s stories throughout the season.

It’s clear that Felicity deserves better storylines than what she has been getting recently, and with Beth Schwartz leading the more female-populated Arrow writers’ room, we’re hopeful that Felicity will be receiving them sooner rather than later. Here are five potential storylines that Felicity Smoak could and should have in Arrow Season 7.

The Arrow Season 6 finale ended with Oliver turning himself into the FBI and going to prison after Star City was saved from Diaz. His decision left Felicity as a single parent to William, as the two of them were expected to enter into protective custody under ARGUS.

While we’ve seen Felicity be a co-parent to William alongside Oliver, it’s natural that she would have some trepidation about taking on the role entirely by herself. Who could she turn to in order to quell those fears? There’s only one person: her mother, Donna Smoak.

Felicity reaching out to her mother for advice about William not only makes sense, but it also provides the series with an opportunity to strengthen the connection between the two women. Donna hasn’t appeared much on Arrow since Season 4, and while we know she and Felicity are in a good place (given Donna’s appearance at Oliver and Felicity’s wedding reception in the Season 6 midseason finale), their mother-daughter relationship is a crucial component of Felicity’s character that could always be deepened.

Plus, Arrow is a series that suffers from not having enough authentic relationships between its female characters. Devoting more time to the bond between Felicity and Donna could be a smart and satisfying way to address that criticism.

Vigilantism remains illegal in Star City at the start of Arrow Season 7, so that gives Felicity the perfect excuse to focus on something in her life that’s a little less dangerous but just as important: her business. Season 6 featured moments of Felicity and Curtis working together on projects for Helix Dynamics, but the division of Team Arrow and the Captain America: Civil War-inspired battle between the two factions derailed all of the progress the two of them made.

In Season 7, now that there’s less conflict between the Newbies and OTA, Felicity should officially announce and open Helix Dynamics. This storyline would not only let Felicity help the people of Star City in a non-vigilante way, but it would also allow her to carve out her own public identity beyond “Mayor Queen’s wife.”

Also, this story provides Felicity with the chance for a little tech-business redemption. Leading Helix would be her second time as the CEO of a major company, and she could prove how capable she is in the position after her less-than-stellar experience at Palmer Tech.

It would make a lot of sense if Felicity and William are still in ARGUS’s protective custody to begin Season 7, given that it has only been a few months since Oliver’s arrest and his public declaration that he is the Green Arrow. However, there’s no way that someone as fearless and determined as Felicity Smoak will be satisfied with being a stay-at-home mom. She’ll need to find a bigger way to help people.

That’s why I can envision Felicity teaming up with Lyla (and potentially Diggle) at ARGUS. She would not just serve as the agency’s own version of Overwatch, but she would also do her best to keep its ethics in check, given its history of questionable activities.

This storyline would also supply viewers with more Felicity/Lyla scenes, and the few moments we have gotten in the past between them, especially at the end of Season 6, have been wildly entertaining. And as I hinted at in the Donna section of this article, Felicity (and, more importantly, Arrow) needs more female friendships.

Felicity Gets Justice by Tracking Down Diaz Herself

The only person who might hate Ricardo Diaz more than Oliver Queen is Felicity Smoak. So wouldn’t it be the sweetest form of justice if Felicity goes on a solo mission (like Oliver did for much of last season) to track down Diaz and make him pay for his crimes?

Felicity could use all of her tech skills to find images, videos, paper trails, and any other signs that indicate where Diaz might be. Perhaps she even gets assistance from her father, Noah, since he has a wealth of knowledge about dark-web criminal activities, and we can further establish where their father/daughter relationship is at this time

Also, Felicity’s search for Diaz could lead her towards uncovering the Longbow Hunters, who are expected to be the central antagonists of Season 7. Whatever information she learns about them could prove to be critical when Team Arrow finally reunites after Oliver is released from prison.

Felicity and Diggle Team Up to Free Oliver From Prison

And speaking of Oliver getting released from prison, the two people I can see leading that charge are Diggle and, of course, Felicity. While this storyline isn’t necessarily a Felicity-centric one, it would deliver more scenes between her and Diggle, who are, without a doubt, one of Arrow’s best but most underutilized pairings.

The two of them working together could be a fun way for Arrow to call back to the moments of OTA friendship that were so frequent in the show’s first two seasons. Plus, if anyone is going to get Oliver out of prison, it should be his wife and best friend.

Arrow returns on Monday, October 15, at 8pm on The CW.

Chris King
Ckinger13
Chris is a freelance writer with a passion for CW shows and a co-host of the podcast iZombie Radio. When he's not writing or podcasting, Chris spends his time eating spicy wings, cheering on the Philadelphia Phillies and Eagles, and re-watching the greatest film of all-time, 'Sing Street.'