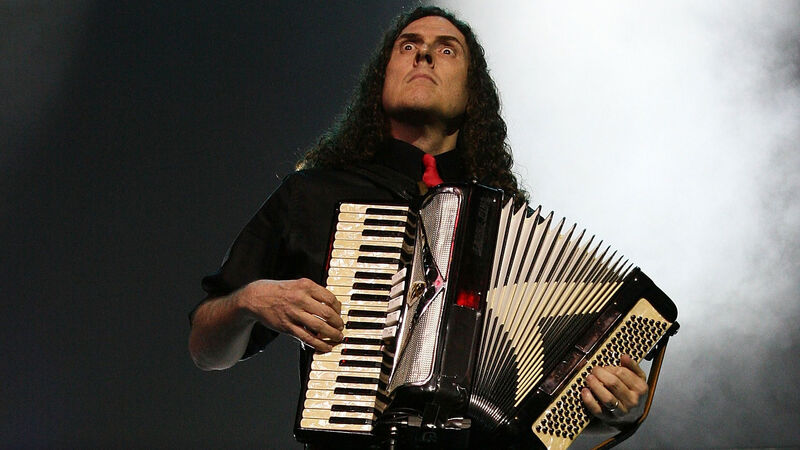 Weird Al Yankovic has been producing pop song parodies for close to thirty years now. This man with an accordion and curly hair has gotten his hands on the greatest music of our lifetimes and even our parents’ lifetimes. Great acts like Queen, Michael Jackson, and Lady Gaga have all had their songs mercilessly tampered with to instead be about riding a bus or being fat or something. Still, as great and as funny as “Eat It” is, nothing will top the original. Beat It is a rocking pop song with one of the best guitar rifts ever. Any parody has to be inferior to the real thing. No matter what song Weird Al messes with, it has to be worse than the inspiration, right?

Actually, not all of the acts Weird Al has satirized were all that great. We still worship Nirvana, but are there many Gerardo fans left in the world? Who is clamoring for more from Chamillionaire? Weird Al has outlasted a lot of careers, but some careers are a lot shorter than others. Some songs disappear for a very good reason. Or maybe the song wasn’t bad in the first place, but Weird Al just improved it. There are acts that have disappeared from our memories that now get to be immortalized inside the albums of a polka artist who once had a mustache.

“Taco Grande” is not one of Weird Al’s all-time greats. It’s decent but hardly an A+. The original “Rico Suave” is a Latino rap song, so picking Mexican food as the new subject is pretty low hanging fruit. A lot of the wordplay is simply Weird Al replacing women with “tacos,” and four minutes of muy caliente humor is just too long.

However, the original song is awful. Beyond awful. Literally anything would be superior to one-hit-wonder Gerardo Mejia’s shallow bragging. The ’90s were a golden age of rap music. Yet Gerardo stands among the worst things to come out of that decade. He looked ridiculous and sounded worse. “Rico Suave” was a song that became an embarrassing relic within a year. It’s the kind of song that makes you feel sticky afterward. Like you need to shower to get the pseudo-macho posturing off your skin.

Weird Al’s love of greasy refried burritos comes off sweet in comparison to Gerardo promising to eat women “raw like sushi.” And while Gerardo has all the mangled flow of Vanilla Ice and the voice of your bratty preteen kid brother, Weird Al knows how to rap and sing competently. “Taco Grande” doesn’t put a bad taste in your mouth. It makes your mouth water. You can taste the crunch of the taco shell. I’ll take any fat slob in a Taco Bell over Gerardo’s wanna-be Latin lover.

“Pretty Fly for a Rabbi”

The Offspring’s “Pretty Fly for a White Guy” was already a joke song in 1998. It mocked the ultimate stock loser of the ’90s: wiggers. Every comedy movie needed that one pale white guy pathetically talking as if he was one of the gangstas. Wiggers were the ultimate posers. Though you’ll notice, The Offspring were a white band. Rap music was huge in 1998, but there was still this vague sense that it was only for black people. There was a backlash against liking rap music if you were white back then. This basically broke down in the 2000s as hip hop became truly mainstream. But while the premise of “Pretty Fly for a White Guy” is a bit dated, the song is still fun. It’s a decent if mostly forgotten tune.

But if you’re looking for humor, “Pretty Fly for a Rabbi” makes The Offspring look like amateur hour. Weird Al throws in every joke there is about American Jews in a masterpiece of fast talking humor. Probably every Yiddish word that’s survived in pop culture finds its way here. “He never acts meshugga and he’s hardly a schlemiel.” It even goes into disgusting detail about Judaism. “The parents pay the moyl and he gets to keep the tip.” For a lifelong Christian, Weird Al knows his stuff. Plus, while the song hits the typical Jewish stereotypes, it’s a happy celebration of what seems like a legitimately great rabbi. It’s ten times as funny as the inspiration and isn’t mean-spirited at all.

“Trapped in the Drive-Thru”

“Trapped in the Drive-Thru” is a simple tale of a husband and wife going through a fast food thru-food. It’s also an epic of emotions, indecision, and twists with a heart-breaking ending. Plus, it’s about a fraction of the size of the original.

In 2005, R. Kelly dropped on the world what he called a “hip-hopera”, a rap opera, “Trapped in the Closet.” The project was one melody in E major repeated over and over in a soap opera narrative. The adulterous protagonist is trapped in a closet after a night with a beautiful woman. Then things swerve into increasingly weird directions. R. Kelly just kept adding to the thing, turning it into this mammoth and ever more bizarre joke. He dragged out “Trapped in the Closet” for thirty-three chapters over seven years, with a storyline that would eventually feature the mafia, secret gay affairs, and a little person. It is a fascinating mess of a song. And R. Kelly is now threatening another thirty-five chapters soon enough. God help us all.

“Trapped in the Drive-Thru” is instead completely simple and mundane, but it feels like something we’ve all suffered through. The narrator’s wife is only mildly hungry and can’t decide what to eat for dinner. There’s the typical drama of any trip down a greasy drive-thru lane. Everything goes wrong but in tiny, annoying ways. Plus, the damn morons at the burger place forgot the narrator’s onions! Weird Al dials back the silly for this one – R. Kelly’s work was silly enough. But just the mundane nonsense of regular life is hilarious enough.

I’ll admit a slight bit of bias – perhaps – with these picks. I’m white, I’m nerdy, I edit wikis, so of course I’m going to love “White & Nerdy.” But let’s be real here: “Ridin’” by Chamillionaire is a very good song. But “White & Nerdy” is truly great. It’s still Weird Al’s biggest hit on the Billboard Charts, topping out at number nine.

Chamillionaire largely disappeared after 2005 to become a successful investor and tech advisor, and so did his song. The 2000s had plenty of bumping hip hop songs, and while “Ridin'” is a great example, it’s easy to lose it in the shuffle of other hits. The song is pretty ahead of its time, being about racial profiling of all things. Every other big rap song back then was hos and bling, but Chamillionaire almost makes a real point. He then forgets what he was trying to say to brag about his car and how loud his music is. The song isn’t perfect, but if you’re nostalgic for the Houston rap scene, “Ridin'” will work.

“White & Nerdy” however is a classic. No list of Weird Al masterpieces is complete without it. The song seems like it would be a sad tale of envy. In the chorus the narrator laments that he’s not cool enough to “roll with the gangstas.” However, between the choruses, the song is a proud celebration of everything lame and geeky. Weird Al takes the squarest of the squares in his narrator and makes this look cool with the utter confidence of it. There is a swagger to choosing between Kirk and Picard. No, the narrator can’t fit in with rappers. Instead, Weird Al makes his narrator happy with his segway and his hilariously bland life. “White & Nerdy” is a song about accepting yourself and your nerdy whiteness.

“Party in the CIA”

“Party in the USA” is a party song. There were ten thousand of them in 2009, there were another ten thousand in 2010. The song is perfectly fine. It’s catchy, it’s happy, it’s disposable.

One thing though: Miley Cyrus’ voice is sooooo shrill here. Throw in some auto-tune and it’s like an electric drill digging into the back of your eyes. “Party in the USA” is unlistenable seven years later.

So Weird Al sounds better in “Party in the CIA,” probably making it already the better version. But, this is also a very dark song for Weird Al. As happy as the production is, “Party in the CIA” came out only a few years after the Bush-era torture program, and Weird Al pulls no punches. “You need a quickie confession? We’ll start a waterboarding session.” After Edward Snowden, the song only got darker. “Tapping the phones like yeah, shredding the files like yeah.” The gags stay broad with James Bond references and the pop song beat. Weird Al isn’t going to condemn seventy years of US foreign policy, but this song gets pretty close. This is still the “My Bologna” guy, right?

For Miley Cyrus, edgy is twerking with the “Blurred Lines” guy. Weird Al reaches a much deeper edge in “Party in the CIA,” while still remaining chipper, clever, and entertaining to his audience.