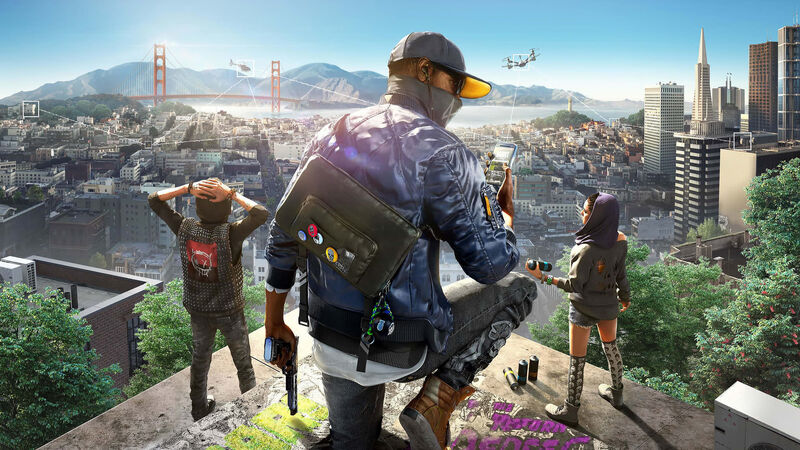 Two years after the original Watch Dogs hacked its way into our hearts as one of the first great open-world games of this console generation, Ubisoft’s tech-focused action franchise is back for another go-round with Watch Dogs 2. The new game focuses even more on syncing with today’s reality, both in our technology and current events.

There are many reasons to anxiously await the arrival of Watch Dogs 2 on Nov. 15, but these six big upgrades are leading the pack. Whether you’re in the market for a better story, cool new features, or neat new gadgets, these are the reasons that Watch Dogs 2 has quite the pedigree.

While you eventually warm up to original Watch Dogs protagonist Aiden Pearce over the course of the game’s events, the franchise’s first hero was just a bit too distant from the proceedings to immediately capture the attention of some players. Instead of focusing on a withdrawn protagonist avenging his niece, Watch Dogs 2 features a more dynamic and younger hero in the form of Marcus Holloway, who has a more direct reason to use his hacker skills. He must clear his name after he’s framed by the notorious operating system that’s plagued the original game’s Chicago setting and has moved west for the sequel.

Don’t get us wrong, Chicago is one of America’s greatest cities with plenty of landmarks to explore, but if you’re talking about tech, there’s one part of this country that’s synonymous with innovation: Northern California. You can’t walk a block in San Francisco without passing at least one startup, and Silicon Valley is filled with campuses devoted to tech giants, while other parts of the Bay Area serve as playgrounds for the rich and technologically savvy. On top of all that, the older building architecture and steep streets of SF are great for exploring or performing stunts, while the tall buildings of downtown SF and Oakland keep Watch Dogs 2 in line with other big city-based open-world games.

Even though Watch Dogs 2 has improved the driving and combat mechanics of the original, maybe you found it a bit incongruous that a tech hero has to also master firearms and fisticuffs to save the day. Ubisoft Montreal has beefed up the hacking systems in Watch Dogs 2 to the extent that Marcus can progress through the entire campaign solely through hacking.

The variety of hacking abilities has broadened so that you’ll have multiple options when you’ve breached the e-defenses of various targets. The devs paid special attention to make sure there were many non-lethal options. Instead of remotely driving a car, you can point it at a specific target. Rather than turning off a circuit breaker, you can make it explode to hurt nearby enemies. You can also hack into the personal history of NPCs to make them priority targets for police so you can incapacitate enemies without having to touch them!

The original Watch Dogs had some clever online ideas, like sneaking into someone’s single-player campaign and attempting to hack their smartphone. Not to mention there was plenty of fun to be had in competitive events like racing or hacking challenges, but many fans clamored for a true co-op experience. Watch Dogs 2 is set to deliver a truly cooperative online experience, as you can tackle the entire campaign with a friend (or even strangers) helping out in the fight against ctOS. The drop-in-drop-out co-op happens seamlessly in the game’s world. However, there are even more opportunities for invasion, as online players can join the police forces following Marcus should he cause too many crimes.

The Missions Are Straight from the Headlines

The tech world moves pretty fast, so it’s astonishing to see how Watch Dogs 2 has its finger on the pulse of current events. Many will remember that Martin Shkreli made waves by controversially boosting the price on his pharmaceutical products, and Watch Dogs 2 allows you to foil the plans of a very similar medical company CEO. Similarly, during this contentious election year, Marcus and his hacker friends find themselves battling local politicians.

Whether you think they’re awful implements of destruction or cool tech toys, drones have become pretty popular in the time between Watch Dogs and its sequel. While the original allowed you to remotely control tons of tech, those who want to access devices while staying stealthy have some neat new gadgets to scout areas and engage with targets from afar. There’s a drone-like mini-helicopter that can pick up large items and lug them anywhere (hopefully) without causing a fuss. You can also quietly drive a tricked-out remote control car into enemy territory where it can use various appendages to engage with hackable items inside guarded buildings.

These are just a few of the reasons you’ll want to check out Watch Dogs 2 when it releases on PlayStation 4 and Xbox One on Nov. 15.