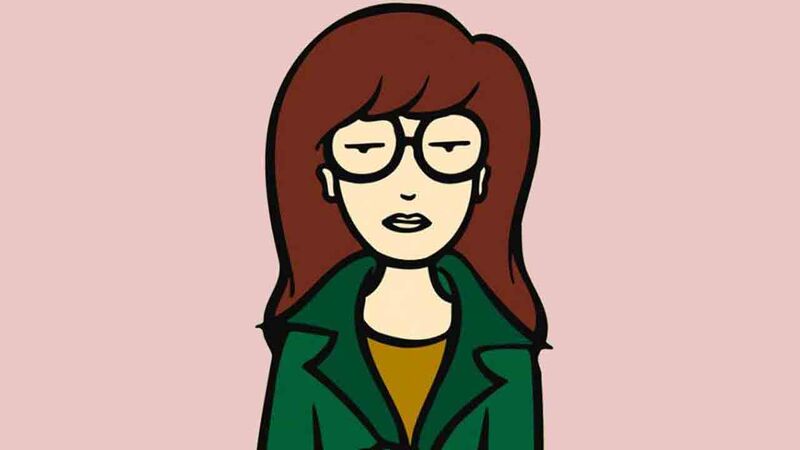 6 Things We Want in the ‘Daria’ Reboot

It’s been a pretty sad 16 years for angsty, cartoon-loving 90s babies. But now, our millennial prayers have finally been answered — as MTV has announced that a reboot of Daria is like, totally in the works.

While it can be dangerous to revisit a classic, amidst a seemingly hopeless political landscape, Daria is arguably more relevant today than ever before. Her signature satirical take on this “sick, sad world” is exactly what network television needs right now.

So, what can we expect from the reboot? Going under the tentative title Daria and Jodie, this comeback series will focus on the lives of an adult Daria and her former Lawndale High classmate, Jodie Landon. Interestingly, Daria’s comeback will be penned by Grace Nkenge Edwards, also known for her work on Unbreakable Kimmy Schmidt, Inside Amy Schumer, and Broad City, just to name a few.

In other words, Daria and Jodie has the potential to be another home-run for MTV, if they don’t miss the mark. So what does MTV need to do to have us eye-rolling along with our favorite cartoon cynic? We’re glad you asked. Here are six awesome things that we sincerely hope this Daria reinvention will include.

As fans will know, Jodie and Daria were just acquaintances in high school — her real best friend was Jane Lane, and she needs to make an appearance. She was snarky yet well-adjusted, an artist who shared Daria’s worldviews, and unsurprisingly, they immediately gravitated towards each other at Lawndale High. Daria and Jane had a rapport unlike any other friendship on TV, their senses of humor were perfectly complementary, and they would oftentimes complete each other’s sentences.  Though they had a brief falling out in Season 4, for this writer, their friendship was the cornerstone of the series.

It would be unimaginable to have another Daria series without Jane. Miss Edwards, you know what to do.

Though Daria’s scathing social commentary was novel in its time, looking back, it’s hard to deny that it came from a place of white privilege. Daria was born from an upper-middle-class family: her parents both had high power jobs and her path to college was never questioned. Daria always had a feminist vibe that was revolutionary for the time, but it was never quite intersectional enough.

Hopefully, with the reboot’s newfound focus on Jodie Landon, an African American woman, this time the show’s painfully sharp social commentary will cover more bases. Considering Daria and Jodie were never really close in the original series, we hope that this reboot will compare and contrast their individual lives, rather than their experiences together. Paired with Grace Nkenge Edwards’ experience navigating academically elite environments, Jodie could be the perfect way to comment on what it’s like to be an African American woman in the United States today.

In the first couple of seasons, most Daria fans were totally ‘shipping Daria and Trent, Jane’s burnt-out, older brother. However, Daria’s real OTP was with Tom Sloane, Jane’s ex-boyfriend.  Tom was a well-meaning, well-read, cynical cinephile. The two of them got on swimmingly. When they finally got together in Season 4, it was very satisfying to see Daria connect with someone truly on her same wavelength. In the reboot, we would love to see how Daria and Tom have nurtured their relationship over time.

Quinn was the quintessential popular girl and anti-hero of the show. It’s safe to say that the two siblings were polar opposites of each other. Quinn would refuse to associate herself in public with Daria, and she would frequently ostracize Daria at school. (Though Daria did plenty of that to herself.) Quinn valued popularity over academics and was Vice-President of the fashion club.  Her flock of fellow mean girls, bossy Sandi, anxious Stacy, and clueless Tiffany, were a Greek chorus of sorts, repeating materialistic rhetoric in a vapid echo chamber.

We’re dying to see how her life turned out, because, there’s massive comedic potential in watching Quinn get smacked in the face with a healthy dose of karma.

Daria was the embodiment of teen angst, the girl who perfected shade-throwing, the black sheep that was somehow 100% relatable. We loved her long before hipsters stole her look because she wasn’t afraid to live her truth. Her melancholic, malaise truth. We certainly hope that Daria doesn’t grow out of her deadpan sarcasm, rather it will ripen with age.

Daria‘s end credits were like the icing on top of the sundae. Every great show has an end-credit schtick, like Arrested Development’s “On the Next …” or Community’s adventures of Troy and Abed. Daria was renowned for having incredible artwork at the end of each episode, known as her alter egos. They usually showed all the characters dressed up as pop culture references or ridiculous versions of themselves.  In the Daria reboot, let’s hope these beauties make a comeback. Imagine Daria and Jane à la Kardashian.

If MTV keeps some of these awesome Daria elements, we have no doubt in our minds that this reboot is going to be another hit! Sadly though, we still don’t have a solid release date for the reboot. The good news? While you wait for Daria and Jodie to air, you can always stream all five seasons of the original series on Hulu.