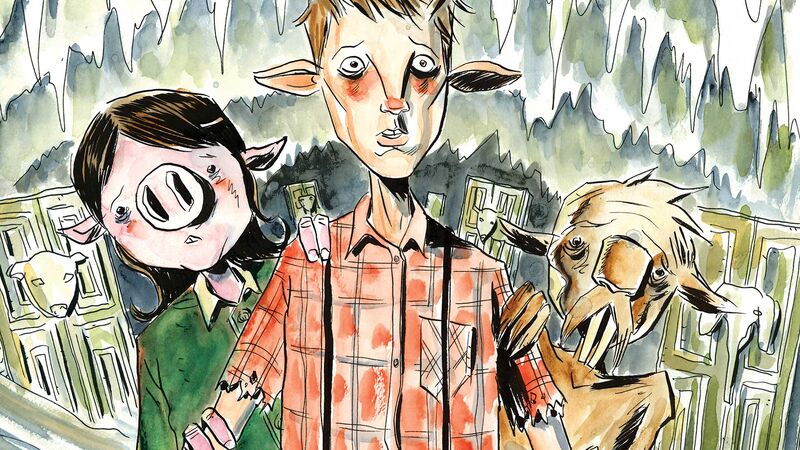 7 Jeff Lemire Comics to Read Before They Become Classics

If you’re not already familiar with the works of Jeff Lemire, you should be. The Canadian writer and artist has built a name for himself as a creator of tales just as likely to explore small-town life as the farthest reaches of the universe – and studios are lining up to adapt them for film and television. In fact, his brilliant ongoing series Gideon Falls already has a TV adaptation in the works.

While that’s a great series, we know you want to earn some serious hipster points and be ahead of the curve. So without further ado, here are seven of the best works you need to read from one of the world’s most exciting creative talents — before they get turned into the next silver screen hit.

Arguably Lemire’s first breakthrough work, Essex County is inspired by the real-world Ontario community where the cartoonist grew up. Focusing on smaller, emotional stories in the pastoral setting, Lemire explores tales of brotherhood, loss, and small town life. Published by Top Shelf, the series established Lemire as a breakthrough voice on the independent comic book scene, and earned him nominations in the prestigious Eisner and Harvey awards – both of which recognise excellence in the comic book field.

A post-apocalyptic series with a twist, Lemire wrote and drew this series at DC’s Vertigo imprint. Set years after a mysterious disease wiped out the vast majority of the population, Sweet Tooth follows the gentle Gus, a young boy with antlers raised in isolation by his God-fearing father. Like all children born since ‘The Affliction, Gus is part-animal – except Gus was born before the illness struck, and his origins may be tied to the fate of the world.

Hunted by the remnant military of the old world and deranged cults obsessed with the hybrid children, Gus’ struggle for survival is contrasted with troubling visions and prophetic dreams, making Sweet Tooth a unique and thought-provoking exploration of the end of the world.

When DC controversially revamped its entire superhero line in 2011 with its “New 52” initiative, few titles escaped unscathed, with most having their histories wiped. One of the few to come out stronger for the change was Animal Man, written by Lemire and with art by Travel Foreman. The niche character – created in 1965 by Dave Wood and Carmine Infantino – has the ability to mimic the abilities of any living organism, but his adventures are distinct from other superheroes in that they prominently involve his young family.

Lemire’s run successfully reintroduced Animal Man to the core DC universe (after years as a mature readers title at Vertigo), while emphasising his role as a father, with the primordial forces that grant him his powers set on making his daughter, Maxine, their avatar on Earth. A tale tinged with horror and loss, this stands as one of the best Animal Man runs in the character’s history.

As a character, Old Man Logan shouldn’t work. An older Wolverine from an alternate future where supervillains have conquered the world, the character was originally the focus of a standalone story in 2008. However, in the wake of Marvel’s 2015 line-wide shake-up Secret Wars, the savage senior was catapulted into the main universe – and a solo series written by Lemire, with art by Andrea Sorrentino.

Trapped in a version of his own past, this aged Logan aims to prevent the tragedy that lead to his own dark timeline, and the loss of a family that hasn’t even been born yet. Despite the weird machinations and complicated continuities of mainstream superhero comics, Lemire and Sorrentino strip the story back to its most raw and human elements – if you had the chance to prevent the worst thing that ever happened to you, how far would you go to do so?

In 2014, Lemire became one of the main creative forces at Valiant Entertainment, a publisher with a smaller but more connected universe of super-powered characters than Marvel or DC. After debuting with The Valiant, a four-issue series co-written with Matt Kindt which set the stage for the next several years of stories across the entire line, Lemire took over one of Valiant’s premier characters, Bloodshot. Originally an action movie cliché – an amnesiac soldier with regenerative powers – Lemire took what he himself described as “the least appealing character that Valiant had” and shaped him into a tragic figure with unlikely depth and soul.

At the same time, the series explored the past of the secretive programme that had created Bloodshot, and the trail of lives ruined in its wake. An unexpectedly heartfelt take on the gun-toting action hero archetype, Bloodshot Reborn – which leads into Lemire’s current Bloodshot Salvation series – turned a one-note anti-hero into a complex and layered figure.

Having left his mark on other superhero universes, in Black Hammer Lemire creates his own. Published by Dark Horse, the series opens ten years after a group of heroes became trapped in the small town of Rockwood. Unable to leave or even communicate beyond the town’s borders, some grow tired of their confinement while others embrace the enforced peace of their new lives.

Yet as frustrations mount, secrets of their heroic pasts are revealed while, in the world they left behind, the daughter of the titular Black Hammer searches for her father than his missing allies. With Dean Ormston on art duties, Lemire uses the series to deconstruct comic book convention, with homages to classic 1940s superheroes, horror host anthology comics, and pulp sci-fi heroes along the way.

The mystery doesn’t end with the core Black Hammer series though, as Lemire expands his universe with spin-off titles Sherlock Frankenstein and the Legion of Evil, Doctor Star and the Kingdom of Lost Tomorrows, and Quantum Age offering insightful takes on different eras and genres of real-world comic book history.

After titanic robots known as Harvesters launched an unprovoked attack on the nine core worlds of the United Galactic Council, androids and artificial intelligences were banned across the system. A decade later, Tim-21, a child-form companion bot, awakens from stasis on the mining colony Dirishu-6 – unknowingly connected to the mysterious Harvesters that devastated the council worlds. Descender sees Lemire venture into hard science fiction, exploring robot sentience, ethics, and even the digital afterlife, along with themes of family that weave through much of his work.

With painted artwork by Dustin Nguyen creating a spectacular vision of a futuristic universe, it’s no surprise that movie rights to Descender were picked up by Sony Pictures in 2015. The complete series is available from Image Comics now, and Lemire and Nguyen are re-teaming for sequel series Ascender – swapping hard sci-fi for high fantasy – which launches in 2019.