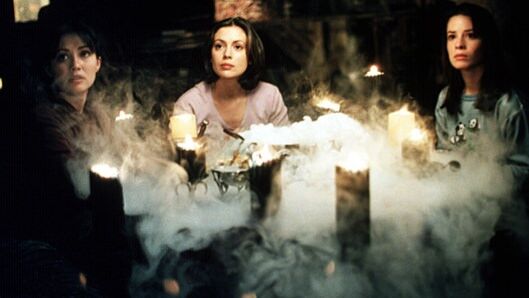 7 Times ‘Charmed’ Tried To Be Accurate About Wicca

Charmed was an amazing show that brought to people’s attention that being a witch is not as simple as “Bubble, bubble, toil and trouble.” The demons and magic were fun to watch and dream about. But the show’s producers actually relied on a few aspects of the real Wiccan religion to present their fantastical stories. Here are seven instances of when Charmed tried to accurately portray the Wiccan religion.

The Halliwell/Warren Book of Shadows is the most recognizable item featured in the show. The sisters are constantly seen using it as a reference guide to learn about spells, potions, demons, and all sorts of supernatural things. At times, we even see the women add to it. The book in the show even has powers of its own, in that it only allows the sisters or someone close to them to read from it.

Contemporary traditional Wiccans also have a Book of Shadows much for the same purpose. There is a Book used by the Coven that has ancient rituals (usually from Gardner’s Book of Shadows). There is also a personal Book of Shadows that each individual Wiccan has. It works much like a journal — they record their learnings and experiences within the Book.

Familiars are guides that help young witches when they first come into their powers, much like Whitelighters. The Halliwell sisters have a very interesting relationship with their familiar. She appears in the early episodes of the show as a cat named Kit. She wears a collar with a pendant displaying the same triquetra that is on the sisters’ Book of Shadows. Then, for no apparent reason, she just seems to disappear. We learn later that she was rewarded for her work with the Charmed Ones and was made human to take care of other familiars. Familiars in the show all appear to be cats.

Historically speaking, witches had familiars that were believed to be possessed by demons that would do the witch’s bidding — usually a black cat, but it could be any animal. In modern Wicca, a familiar can be any animal that the individual has developed a deep spiritual connection with.

From the very first episode of Charmed, we see the sisters using spells to achieve certain goals. It appears as though any witch can write a spell as long as it is clear what it is meant to accomplish — and it rhymes, of course.

The modern Wiccan is not so flippant about spells. Most of them are made in supplication to a deity or simply to cleanse a house of negative energy. And while the sisters did use important items every now and then, such as crystals or candles, they did not use them for every spell as most Wiccans tend to do. The Charmed Ones also relied entirely on their own magic instead of invoking powers and energy from greater sources (i.e. The Goddess).

Potions are another common theme throughout the show. More often than not, the Charmed Ones use a potion in conjunction with a spell to vanquish a demon.

The religion of Wicca is not always so malevolent with their potion making. They do usually cast a spell to enhance the potency of the potion, but the power itself comes from the natural ingredients that it is composed of. Wiccans, as well as other Pagans, believe that different natural ingredients can have a powerful energy of its own to help promote things such as protection or health.

Fun fact: Unlike the popular belief that the most frequently used ingredient in potions is eye of newt, besides common herbs and spices, mandrake root is quite common.

As stated earlier, the sisters did use important objects when performing spells, but they didn’t really use them as often or as accurately as they should have. Athames in the show usually belonged to a warlock or demon and were then used to either locate, summon, or vanquish them. Athames are actually supposed to be a personal item of a witch and used as a focus of power during spells.

Charmed also makes it seem as though any old crystal will do for whatever the Charmed Ones have in mind (usually a trap). In fact, there are a vast number of different crystals, all with their own specific energies that Wiccans employ for various purposes.

Piper and Leo were constantly persecuted about their relationship and were almost stopped from getting married altogether. The ritual of handfasting was exactly the loophole they needed, and they accomplished their goal of having the ultimate bond.

The actual ritual of handfasting is a ritual (that has also picked up popularity among non-pagans) that acts as a commitment ceremony between a couple who wish to be joined. The handfasting can either be for a short time (some cultures would last a year and then move on to a different partner) or be a more long-term commitment, like a wedding.

After Piper and Leo’s first son, Wyatt, is born, we learn of a special ceremony that calls upon all the Matriarchs of the Halliwell/Warren Line to bless a child born into the family for them to be set on the path for good.

So, while it is fun to watch any show within the sci-fi/fantasy genre, it does make it more appealing to add some elements of truth into the mix. Even though our favorite sisters weren’t what the modern religion would consider true Wiccans, it did open people’s eyes to the world of Magick and made people realize it’s not all warts, cauldrons, and broomsticks.

RoseMary Blankenship
MaryRosalea
Woke up one day in Sunnydale and never looked back.