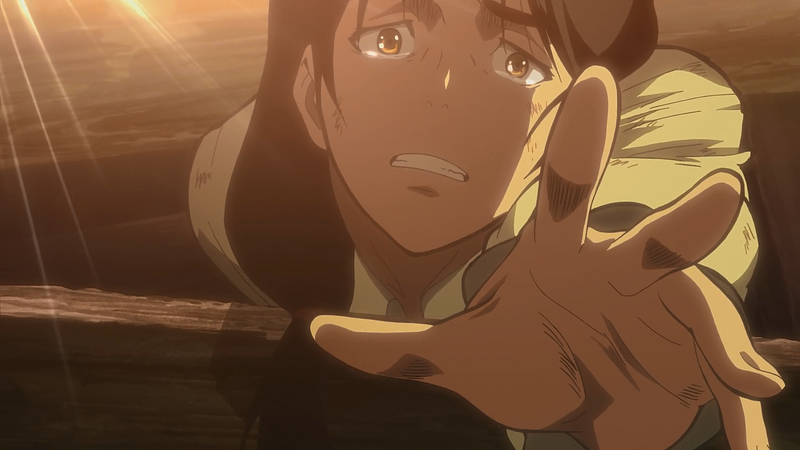 When Attack on Titan first hit TV screens, nobody knew how much of a success it would be. The show’s portrayal of human civilization fighting a race of giant man-eating creatures has made the series one of the best anime of all time. Each episode, viewers ponder which character would bite the dust next. And while this may be entertaining, there are a few deaths that brought up a wave of emotions. So here are eight tragic deaths from Attack on Titan Seasons 1 and 2 that are full of feels.

Right from the opening episode, we see the horrifying world that is Attack on Titan when the Colossal Titan breaks down Wall Maria and lets a horde of Titans flow into the city. During episode one, Eren fights with his mother, Carla, who’s against him joining the Scout Regiment. However, when he returns to his house after an attack, he sees it in ruins and his mother trapped, and suddenly all his feelings of anger fade away and despair takes hold.

Pinned down by debris and unable to move, Carla urges Hannes to take Eren and Mikasa before the approaching Titan eats them all. At first, Carla seems relieved that her children will survive this attack but it soon fades away as her desire to survive for her family rises. But it’s too late. The Smiling Titan already has her in its clutches and, with its enormous teeth, bites Carla in two. The only thing sadder than Carla’s death was Eren’s reaction when he watches his mother being eaten alive.

Although they didn’t die at the hands of a Titan, Mikasa Ackermann’s parents’ death is still sad. In a world where humans are on the brink of extinction, people can become more vicious than the creatures hunting them and ripping them apart.

During a flashback in the episode, Eren’s adoptive sister is nine years old and living happily with her parents. But this joy all falls apart when a group of men arrive at the Ackermann house and brutally kill Mikasa’s parents in front of her. Their tragic deaths and her subsequent kidnapping change Mikasa from a cheerful, outgoing little girl to a cynical young woman who sees the world as a cruel place where only the strong survive.

Getting into a romantic relationship while the world is falling down can be hard. However, because the military men and woman in Attack on Titan have such short lifespans, they take advantage of every second that they’re alive. This happens to be the case between Hanna and Franz, who seem to be into each other. However, their brief romance is cut short during the battle of Trost.

Once again, the Colossal Titan attack the people behind the wall, and given it’s their first time in a real battle, Hanna becomes frantic. Thankfully, Franz is there to ease her fears, vowing to look after her no matter what. However, this is a promise he’s unable to keep as later in the episode, we see a frantic Hanna trying to revive Franz with CPR. Her fears and desperate attempts at trying to revive Franz make her unable to see that his lower body was eaten. Her desperate attempt and Armin‘s realization that Hanna is trying to revive her love’s dead body makes Franz’s death all the more tragic.

After the battle in Trost, Jean Kirschtein finds the body of his best friend, Marco Bodt among the deceased. While we don’t see how he died, it’s Jean’s vacant stare and his pleads to know what happened to Marco that really stuck with viewers and brought on the feels.

Jean had lost his closest friend and confidante — the one person who encouraged him to accept his abilities as a leader — and Marco’s death had a life-altering impact on him.

What makes Marco’s death even more tragic was the revelation in Season 2 that it was Reiner Braun (Armored Titan) who restrained Marco and left him to be eaten alive by a Titan. His life was caught short at the hands of his comrades, those who he considered as brothers. Marco’s tragic death occurred just to keep Reiner’s true identity a secret.

Levi’s squad was one of the best teams in the Attack on Titan series. Eld, Oruo, Petra, and Gunther are each famous for their Titan-slaying skills and their loyalty to their commander, Levi. However, all of this is taken away at the hands of the Female Titan and swiftly, one by one, the squad are smashed into trees or stepped on.

To see such talented Survey Corps members suddenly and gruesomely die is a stark reminder that even the best can die at the hands of the Titans. But, the real tear-jerker comes when Levi dashes through the forest passing by the corpses of his teammates. His grim expression as he looks at their mangled bodies is heartbreaking.

But the heartbreak doesn’t end there. Returning home, Petra’s father runs up to Levi and talks with him about his daughter getting married. Levi’s vacant look tells it all — how can he tell him that his daughter is dead?

After killing a lot of Titans, Miche encounters the Beast Titan who grabs his horse and hurls it at him. To avoid the equine projectile, Miche jumps off the roof, but a nearby Titan catches his leg. To his surprise, the Beast Titan orders the smaller Titan to stop, but Miche is so shocked, he doesn’t respond to the Beast Titan’s questions, which only infuriates him. So, it takes Miche’s ODM gear and orders the surrounding Titans to do as they please with him.

Remembering his vow to never give up, Miche tries to fight, but it’s hopeless. Unable to move and with no weapons, Miche screams in agony and begs for his life as the Titans eat him alive. Again, humanity loses a great soldier and leader.

In a flashback scene, Miche spots Titans coming from the southern side of Wall Rose and suspects that there may be a breach. So, he orders his squad member, Nanaba, to take the rest of the team to search for the opening. But instead, they find Gelgar‘s squad. As night falls, the two groups decide to take refuge in Utgard Castle.

The peace doesn’t last long as Titans, along with the Beast Titan, attack the castle. Nanaba, Gelgar, and a few others engage the humanoid creatures, but soon enough, only Nanaba and Gelgar are left.

Injured and tired, Gelgar falls from the tower and is caught by a nearby Titan. Nanaba manages to save him but his ODM gear runs out of both gas and blades. Due to Nanaba’s quick thinking, Gelgar lands inside the tower. He quickly spots a bottle of alcohol, which makes him happy to at least to have a final drink before dying. But to his disappointment, it turns out to be empty. And to make matters worse, a Titan grabs and eats him.

All the while, the horde is eating Nanaba alive, and as they rip her leg off her body and loses a lot of blood, she’s in such agony that she goes into shock and hallucinates, screaming and begging to her absent father that she won’t do it again.

When Hannes goes to rescue Eren and Mikasa during the first episode of the series, he’s horrified by the distinct size and grinning face of the Smiling Titan, and he’s unable to save Carla as well. He later explained to Eren that he didn’t fight the Titan because he didn’t have enough strength.

Now, several years later, Hannes, along with a few soldiers, take part in a mission to rescue Eren from Reiner Braun and Bertholdt Hoover. The ordeal leaves Eren without any energy to transform when suddenly the Smiling Titan makes an appearance.

Hannes steps in to protect Eren and engages the Smiling Titan in battle, showing that now he can kill the creature that took Eren’s mother. But, after a lengthy battle, the Smiling Titan catches Hannes and devours his entire lower half, tearing his spinal cord. The same way it did to Carla.

Seeing history repeat itself, Eren collapses and goes completely insane, screaming with laughter and hopelessness. This is a scene too tragic and heartbreaking to watch.