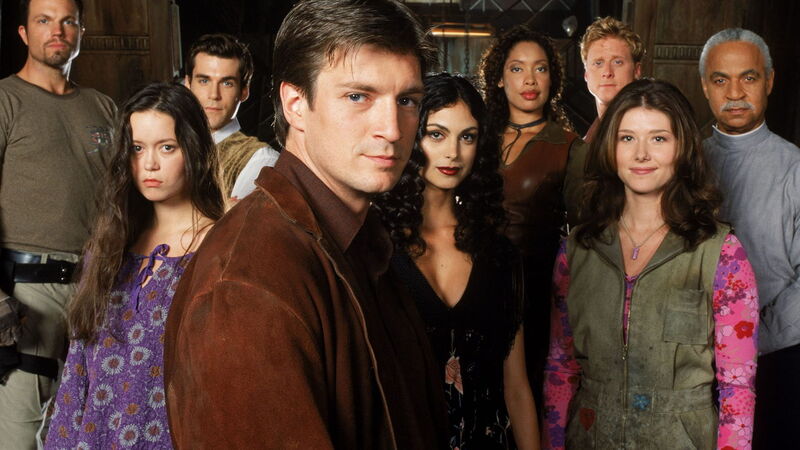 Mass Effect: Andromeda, launching on Tuesday, continues the epic storytelling that the Mass Effect series is known for. Sweeping vistas, intense action, and compelling characters set against an expansive narrative define the series as one of the best examples of a space opera. But Mass Effect: Andromeda is only the latest in a long line of expansive space operas. While you wait to set foot back in the Mass Effect universe, here are 9 of the best sci-fi space operas currently available on streaming services in the US.

Regarded as not just one of the best sci-fi television series but as one of the best television series period, the reimagined Battlestar Galactica breathed new life into a classic, well-loved property. After a surprise Cylon attack virtually wipes out human life in the twelve colonies, a ragtag fugitive fleet of survivors led by the last remaining Battlestar, Galactica, escapes to find the legendary thirteenth colony – Earth.

Political intrigue and the question of how to survive as a civilization in the face of extinction are common themes throughout the series. With the Cylons able to pass as human, the series also debates the nature of what it means to be “alive” and even delves into the nature of religion and belief.

Battlestar Galactica is available to stream on Hulu.

At its heart, Doctor Who is an adventure show, following the Doctor as he bounces from one escapade to another, pulling his intrepid companions along with him. But the themes it explores set it apart from many similar shows. Doctor Who emphasizes finding alternative solutions to problems, with violence being the last resort.

The new episodes since 2005 have embraced this concept even further with long running and interconnected storylines tying together multiple seasons. Doctor Who introduces us to alien vistas and wondrous creatures, but at its heart it is always about the Human condition.

Doctor Who is available to stream on Amazon Prime.

Based on the novel series by James SA Corey, The Expanse explores humanity as it spreads into the solar system and potentially beyond. Set several hundred years in the future, humanity has colonized Mars and established outposts throughout the solar system, including Ceres in the asteroid belt. But with expansion has come division.

Citizens of Earth and Mars see themselves as the bastions of civilization, while living in zero-gravity has given rise to a new breed of human: the Belter. Adapted for life in space, they see themselves as exploited by the Inner Planets and seek to gain to independence. Two seemingly unrelated incidents – a missing persons case and the destruction of a water hauler bound for Ceres – soon dovetail to reveal a grand conspiracy that could prove the existence of alien life.

The Expanse is available to stream on Amazon Prime.

Spun off from the successful Stargate film released in 1994, the Stargate franchise encompasses three distinct series: Stargate SG-1, Stargate Atlantis, and Stargate Universe. In total, 354 episodes and two TV movies were produced across the three series. The shows took the central theme of the Stargate creating a method of travel to a distant planet and posited the simple question – what if the Stargate could travel to different places?

Stargate SG-1 established humans exploring the galaxy in secret, and coming up against hostile races like the Go’auld and the Replicators. They also introduced the Ancients, an ascended race of humans who predated the current inhabitants of Earth. Stargate Atlantis and Universe continued SG-1’s central themes, and followed humanity as it explored the universe at large. Full of engaging characters, intriguing plotlines and grand concepts, the Stargate franchise blended futuristic concepts with myth and legend to create a unique experience.

Stargate SG-1, Stargate Atlantis, and Stargate Universe are available to stream on Hulu.

Over fifty years, Star Trek has spanned five (soon to be six) individual live action series, an animated series, and fourteen films. It has introduced us to countless iconic planets, alien races, and starships, and brought us characters that have entered the common consciousness. It doesn’t matter if you have never seen Star Trek, you know who Captain Kirk and Spock are.

Star Trek was the standard bearer for science fiction television series. At its core, it is a show about hope and mankind’s journey of betterment to be the best possible versions of themselves. Sometimes conflict is unavoidable, but in the end the characters always look to solve their problems through peaceful means. Star Trek shows us a future that could be if only we work together to “make it so.”

Firefly lasted only 14 episodes and gained a cult following that ensures it lives on long after premature cancellation. In the wake of a civil war, a veteran from the losing side puts together a crew of misfits with one simple goal: to work and earn a living. Unfortunately, they exist on the edge of society, and a lot of their work is not exactly legal.

Strong characterisation and a focus on the personal dynamics among the crew make Firefly one of the most relatable series on the list. They argue and fight, but at their core they are a family (well, maybe not Jayne …)

Firefly is available to stream on Hulu

Falling Skies differs from some of the other shows on this list in that it is almost exclusively set on Earth. An alien invasion decimates Earth’s population, forcing the survivors to fight back to reclaim their home. At first, their resistance is little more than holding actions in the face of a superior enemy, but over the course of the series, they learn to adapt the alien technology and fight back, and even gain alien allies of their own.

Despite being set on Earth, Falling Skies spent time exploring the motivations of the various alien races that featured in the series. Alien characters were given characterisation and backstory on par with some of the human characters. On the human side, Falling Skies explored some controversial topics such as the power of the military in time of war, and even the concept of child soldiers.

Falling Skies is available to stream on Amazon Prime

The Star Wars films are the epitome of space opera: larger than life characters, exotic locations, and an epic struggle between good and evil. It was only natural that Star Wars would eventually transfer to television. The Clone Wars focuses on the war only barely touched on in the prequels, but the war is the pivot point on which the entire galaxy hangs.

The Clone Wars follows the heroes and villains of the war as they struggle to survive and overcome galactic conflict and more personal problems. The events of the Clone Wars were referenced in the first Star Wars film, and here we finally get to see the events that shaped the future of a galaxy, far, far, away.

Star Wars: The Clone Wars is available to stream on Netflix

Six people wake up on a starship with no memories. Naming themselves after the order they wake up in, they struggle with their newfound situation. They seek to recover their memories and find themselves involved in intrigue and action.

Dark Matter explores the concept of personal identity and whether or not individuals can truly change who they are. Free of their past, can people truly be different, or even better? Or are they doomed to fall into similar patterns because it is part of who they are at the most basic level?

Dark Matter is available to stream on Netflix