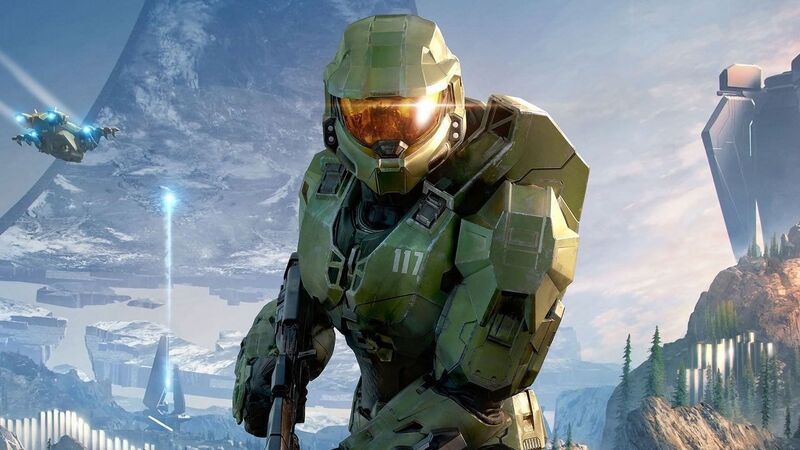 A Day in the Life of Master Chief

Master Chief, aka John-117, is great at combat, dry one-liners, and having palpable sexual tension with a beautiful computer lady, but he can be a difficult guy to read underneath that opaque signature helmet of his. What makes him tick? What puts that spring in his step, that plasma in his pistol? Sure, being a genetically engineered human weapon doesn’t allow for much of a work-life balance when your identity and your duty are so intrinsically entwined, but it’s not as if he stops existing whenever we’re not puppeting his body to tear our way through story campaigns…right?

Using the official Halo lore and everything we know about the life and times of the man, the myth, the Master Chief, we’re taking a closer look at the daily routine of one of gaming’s most beloved leading men. (Of course, given that a “day” is typically used to measure the movements of the sun and the passage of time on Earth, and Master Chief spends a great deal of his time in the vast chasm of space without a visible sunrise or sunset, let’s just say, for the purposes of this article, that the day begins whenever the hell John feels like it does, and ends as soon as he’s exerted himself to the point of becoming what the scientists would call a “sleepy little guy.” ) So, without further ado, let’s take a peek at what an average day in the life of John-117 might look like!

As a child soldier plucked from his home and thrown into a life of discipline and hardcore training, John is likely used to a pretty regimented sleep schedule. So, unless he’s deep into a Cryo Sleep-induced REM cycle, John probably gets up at around the crack of space-dawn every morning. No hitting the snooze button for him—he’s got to get right down to business!

If you’re worried about how it might smell inside of Master Chief’s faithful suit, don’t be! According to Halo: The Flood, a novel set within the events of Halo: Combat Evolved, John does indeed take the occasional shower. This isn’t a leisurely shower where he takes the time to belt out his favorite 26th-century show tunes, mind you—we’re talking a two-minute military shower that only has hot water on a good day. He keeps it quick to conserve resources, and to avoid spending too much time out of his armor. No need to take time for hair or skincare, since no one’s going to see it anyway!

After a shower, most people would pick out their outfit for the day, but Master Chief has no need! He’s been rocking the same flawless ensemble since the franchise began, give or take an upgrade or two. In Halo Infinite, John has traded his old Mjolnir Mark VI armor for the GEN 3 edition. It stays true to that classic Master Chief style while upgrading his strength and resilience. As we all know, a good defense is always in fashion.

No skipping meals here! Breakfast is the perfect way to kickstart the day and make sure that John has all the energy he needs for running, punching, and generally kicking ass up and down the galaxy. They don’t exactly offer a continental breakfast on Zeta Halo, so John has to make do with whatever he can find. Back in his child soldier days, John probably subsisted on some kind of beige nutrient gloop, but now he can chow down on protein bars or even some unspecified alien fruit. Don’t want our favorite guy to get scurvy, now do we?

With fuel in the tank and a can-do attitude, it’s time for John to get to work! In the past, that meant a lot of different things (usually all incredibly physically and mentally taxing), including government killing machine training, combatting the influence of the Covenant, and defending humanity against the Flood.

Halo Infinite finds Master Chief landing on Zeta Halo after jumping off of a Banished ship, with a particular initial mission: retrieve The Weapon, aka the AI built to help pull the plug on Cortana once and for all. From there, he needs to make his way across the shattered Zeta Halo, coming up against Banished forces on different unconnected islands of the ring. So most days on the Zeta Halo, Master Chief needs to basically figure out where the danger is and point himself right at it, with The Weapon at his side (or, more accurately, in his head or popping out of his hand as a hologram).

Speaking of holograms, resident big bad Escharum routinely turns up to taunt Master Chief and remind him of all the obstacles he has yet to overcome. “The Banished will never bow to anyone again. Not the Covenant. Not the Prophets. Not her,” etc. We get it, guy. You want to kill John’s buzz and his (augmented) human body while you’re at it.

Since the Spartans aren’t exactly unionized (…yet?) it’s not as if John gets a guaranteed hour for lunch. Normally, he has to do the interstellar super soldier equivalent of eating a sad salad at his desk. Maybe one of these days, our beloved Master Chief will experience the luxury of going to a Space Olive Garden. After all, when you’re there, you’re Space Family. Currently, though, he doesn’t have the time for such dalliances.

After all, there are missions to complete, former implied-lovers-turned-rogue-AI to track down, and Banished to shoot at with his plasma pistol. No time for soup, salad, and breadsticks when there are lives at stake! And unlike the aforementioned bottomless quasi-Italian delights, human life is a finite resource. However, John still has to refuel to avoid that dreaded late-afternoon crash! For now, he just has to settle for the classic military MRE offerings and try to pretend that choking down reconstituted spaghetti is just as good as Olive Garden’s Tour of Italy. (Olive Garden did not pay us for this article.)

After lunch, it’s back to missions, missions, and—hey, look at that—even more missions! Like any job, the duties and missions start to blend into each other after a while. Save a group of UNSC prisoners here, liberate a base there, take out a high-ranking member of the Banished, wash, rinse, repeat.

Most of John’s missions involve getting into some hefty combat with a variety of enemies, including the adorably small (but dangerous) Grunts, the energy-shield wielding Jackals, Hunters that are basically just a whole bunch of worms stuffed in a mech suit (ew), absolutely jacked Brutes, and more.

Thankfully, there are also tons of weapons to choose from, whether John’s combat style is feeling more “pew pew” or “stab stab” on the given day. There’s the old favorites like Master Chief’s classic assault rifle, but there are also some new toys like the grappleshot, a souped-up grappling hook that can grab onto enemies and guns to pull them closer, or even grab onto a vehicle to invade it like an old-timey pirate. Who says you can’t make your job fun?

After a long day of work, it’s time for the good old MREs again. With so many flavors to choose from, you might say there are (Halo) infinite possibilities! You’d be wrong, but you could still say it. In fact, the only options are likely to be the Rations available at the Armory, which include: Beans with Rice & Bacon, Pork Ribs Boneless in BBQ, or the oh-so-appetizing Beef Stew Lumpy Gravy. If he really feels like satisfying his sweet tooth, he can cap the meal off with whatever the hell “Peach Dessert. Salty” is. Yummy.

Though John’s heightened physical abilities would make it difficult for him to get drunk, that doesn’t mean he can’t enjoy sipping on an after-dinner drink. The world of Halo has the classics: beer, vodka, and whiskey, or champagne (if John happens to be feeling a little fancy). Big strong soldiers deserve bubbles from time to time, too. Plus, a dessert wine would probably help offset whatever makes the Peach Dessert taste salty.

John’s evening routine is even more bare bones than his morning one. Once the fighting and trekking across alien lands is done for the day, and he’s replenished his energy with a well-deserved (though probably not very pleasant) meal, there’s not much else to do other than collapse into a semi-comfortable position and rest those super-strong bones for a little while. He’s not out here doing ten steps of skincare, and if you can’t accept him at his un-exfoliated pores then you don’t deserve him at his death-defying heroism, okay?

Also, the suit stays on in bed. No cozy sweatpants or heart-patterned boxers here, John ends his day the same way he begins it: clad in highly advanced armor, ruminating on the harsh realities of war and what further horrors await him. With no magazines or novels to flip through, it’s pretty likely that he just stares up at the ceiling and waits for the sleep to come. He doesn’t need as much as an ordinary human being, but he’ll be a real grump in the morning if he doesn’t get at least a few minutes of shut-eye.

He did a great job today, and pretty soon he’ll have to wake up and start the whole routine over again. Facing new threats, beating the odds, and helping put the Halo back together. Don’t worry buddy, we’ll wake you when we need you. So, get some rest, sweet Master Chief. Goodnight! Sleep tight! And don’t let the Yanme’e bite!

Addison Peacock
Addisonrpeacock
Addison Peacock is a writer, voice actor, and podcaster. She hosts the romance game podcast Playing Games With My Heart (@heartgamespod). When she's not playing dating sims, she can be found writing about and making horror and comedy content all over this big beautiful internet.